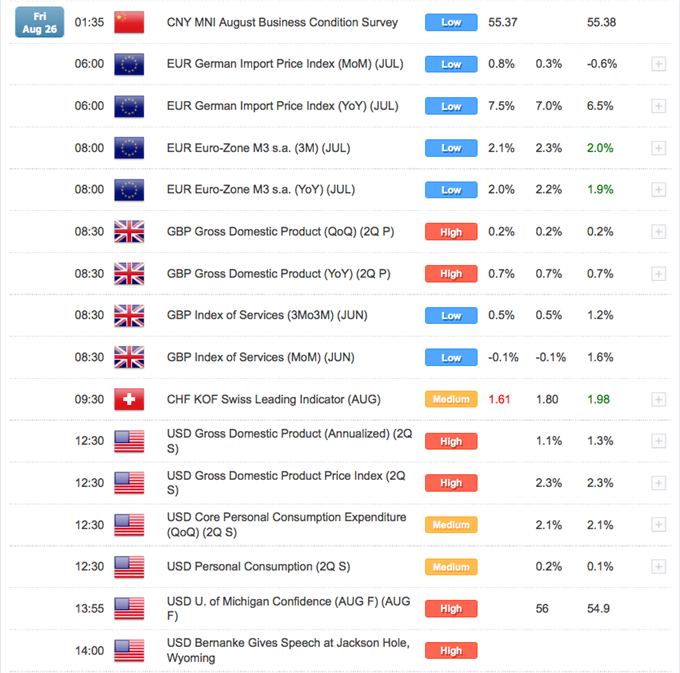 Investors Likely to Look Past Economic Data and Focus on Bernanke

Markets are expected to trade within relatively tight ranges ahead of the most highly anticipated event risk for the week, in the form of the 14:00GMT speech by Fed Chair Bernanke at Jackson Hole. While many had initially been expecting a dramatic market moving speech with announcements of new monetary policy measures and the beginning stages of an embarkation on a third round of quantitative easing, expectations have now been scaled back dramatically, with markets looking for more vague references of a general readiness of the Fed to act if necessary, and an ongoing commitment to keep rates ultra accommodative for an extended period of time. At this point, it seems as though even the most dovish of investors are now more willing to recognize the serious negative risks over the longer-term associated with the implementation of another round of easing. Pimco’s El Arian was recently on the wires saying that “Bernanke must not push QE3 or run the risk of building another bridge to nowhere.” Still, no one can be certain what the Fed chief will say and the speech brings with it a good deal of potential for solid volatility ahead of the weekend.

Relative Performance Versus the USD on Friday (as of 10:30GMT)

While most of the attention will be on speculation ahead of the Bernanke speech, the European debt crisis will not be sitting to far in the backseat, with ongoing uncertainty and fear still very much dominating investor sentiment. Funding pressures in Europe continue to escalate, with the 3 month LIBOR rate hitting its highest level in a year. European banks like Barclays, Credit Agricole, Credit Suisse, RBS, Soc Gen and UBS have all reported needing to pay above Thursday’s daily LIBOR fixing, while Credit Agricole has also said that US money market funding to the bank has been roughly halved due to the escalation in market tensions. Meanwhile, the ECB was the only central bank to tap the Fed via its swap lines in the previous week. As such, we continue to expect the ongoing deterioration and stress in the Eurozone to be the primary source for volatility and this theme should continue to dominate headlines over the coming weeks and months. The United States is now looking at least somewhat closer towards the path to recovery relative to the Eurozone economy and we see more risks associated with the Eurozone over the medium-term.

Elsewhere, although the Australian Dollar is tracking marginally higher on Friday thus far, RBA Stevens hasn’t been offering any real reason to be looking to buy the higher yielding antipodean after giving his semi-annual testimony to Parliament. Short of officially signaling the need for a rate cut, comments that the central bank was ahead on inflation and there was room for stimulus, certainly highlighted the very apparent shift in the RBA’s stance over the past several weeks amidst slowing local economic data and an escalating global macro deterioration. Stevens even addressed the Australian Dollar strength itself after saying that he felt that the rise to 1.1000 Aud/Usd was getting ahead of itself. The currency which has been highly correlated to risk sentiment could start to lose its correlation if the central bank continues to show signs of monetary policy reversal over the coming weeks. We are of the opinion that this will in fact be the case despite the attractive yield differentials, with China still very much at risk for additional cooling going forward.

On the strategy front, while we are currently on the sidelines, we continue to like the idea of looking to be long Usd/Jpy at current levels. As per our technical analysis below, the market failed to show any fresh downside follow through after breaking to record lows into the 75.00’s and has since closed back above some shorter-term consolidation highs to suggest that some form of a base is now in place. Additionally, our in-house speculative sentiment index (SSI) has been showing a decent reduction in retail long positioning in Usd/Jpy which further strengthens the case for additional upside going forward.

Data in the European session was a non-factor with UK GDP coming in bang on consensus and the Swiss KOF disappointing. Looking ahead, US GDP and Michigan confidence highlight the economic calendar in the North American session, but clearly markets will be looking passed this data to the 14:00GMT Bernanke speech. US equity futures are trading flat after tracking higher overnight, while gold is higher and oil lower. 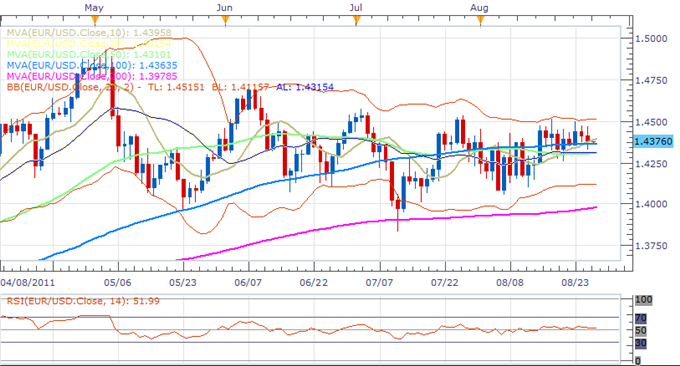 EUR/USD: The market continues to adhere to a bearish sequence of lower tops since May, with a fresh lower top now in place by 1.4500 ahead of the next downside extension back towards and eventually below 1.4000. In the interim, look for any intraday rallies to be well capped by 1.4500, while only a daily close back above 1.4535 negates. Short-term support now comes in by 1.4255 and a break back below should accelerate declines. 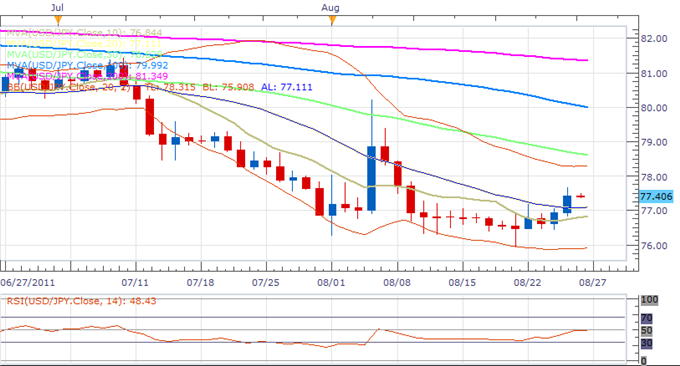 USD/JPY:Although the market recently broke to fresh record lows below 76.00, failure to establish any downside momentum on the break suggests that the market could be looking to establish a more meaningful base. The latest daily close back above 77.30 encourages recovery outlook and we look for additional upside over the coming sessions back towards critical short-term resistance by 80.25. A daily close back under 76.80 delays constructive outlook. 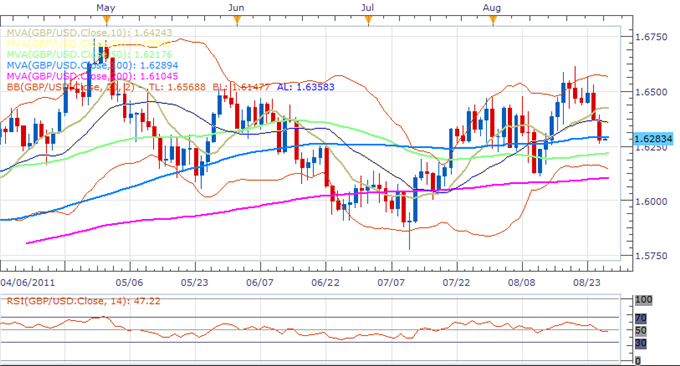 GBP/USD: The market remains locked in a broader consolidation off of the April highs, and a fresh top is now sought out by 1.6600 in favor of the next downside extension back towards the recent range lows at 1.5780. Ultimately, only a daily close above 1.6550 would delay outlook and give reason for pause, while the latest daily close back under 1.6350 should accelerate declines. 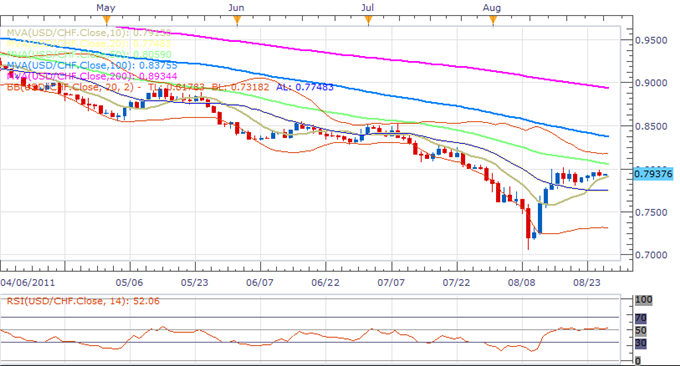