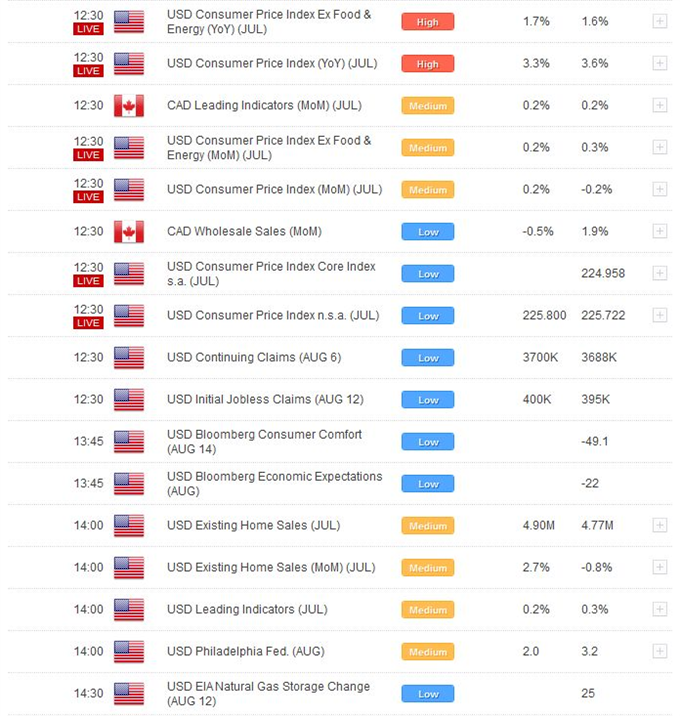 Markets Lower on Fears Over Exposure to European Banking Sector

Overall market conditions remain rather subdued in the current week, and although we have seen some impressive gains in the Euro and other currencies over the past few sessions, these markets are still confined to broader ranges with the price action classified as consolidative. Euro gains have stalled out for now ahead of some critical resistance by 1.4535, and we will use this level of a gauge for directional bias over the coming sessions. Should the market manage to close above this level, then we could see an upside acceleration in the Euro and a fresh wave of Greenback selling. However, inability to establish above 1.4535 will put the pressure back on the downside and opened the door for a bearish resumption.

Relative Performance Versus the USD on Thursday (as of 11:20GMT)

At this point, it looks like the Euro will once again be successfully capped ahead of 1.4535, with a very decent pullback underway on Thursday to potentially set up a bearish reversal day after failing ahead of the key range resistance. Look for a break and close back below 1.4325 to confirm these suspicions and open the door for a bearish resumption back down towards and eventually below 1.4000. This pullback in the Euro has carried through to the rest of the market with the move correlated to a broad based negative sentiment and market uncertainty that has weighed on higher yielding risk correlated assets and open the door for renewed flight to safety buying.

The Australian Dollar is therefore by a good stretch the weakest currency heading into North American trade, with the antipodean most exposed to a rise in risk aversion. The primary driver for the price action seems to be coming from a story in the WSJ that has been gaining a good deal of traction and is uncomfortably reminding investors of patterns seen in 2008 when panic took hold and did not let go until major damage was done. The story outlines the potential danger in exposure of US banks to a very troubled European banking sector and has market participants very worried about the fallout from a broad based reduction of exposure to these banks. The end result could be the rapid deterioration in the health of these banks that could ultimately compromise their ability to function on a day to day basis. While we are far away from such an extreme at this point, the very thought of this possibility and idea that certain exposures are being reduced looks to have shaken confidence considerably with global equities rolling over substantially led by declines in the Dax.

Moving on, more Fed officials have been on the wires in recent trade with Dallas Fed President Fisher and Philly Fed chief Plosser offering their views on monetary policy and the latest FOMC decision. Both members are in the minority and both have expressed concern over the commitment to leave rates ultra accommodative for such an extended period of time. While Fisher is certainly the more hawkish and optimistic of the two, both officials were very quick to point out that the Fed should not react to drops in the equity markets and other asset classes and instead should be more focused on reacting to any impairment of function in the financial markets (ie liquidity drying up). As far as his optimism is concerned, Fed Fisher seems to share the sentiments of Warren Buffett who says that he thinks the US economy just might recovery faster than the Fed has anticipated.

These more hawkish Fed views have not helped the US Dollar in recent trade, although we do believe that the minority view of the Fed is worth serious consideration. Many Fed officials have provided clarity on the language in the previous statement which expressed the misleading commitment to leave rates as is until mid-2013. It is now clear that this does not represent a firm commitment by any means and should market conditions change, the Fed will be prepared to look to reverse policy.

Ultimately, any reversal in policy, whenever it may happen should narrow yield differentials back in favor of the US Dollar and provide a fresh prop for the buck. In the interim, we still see room for USD appreciation even with the ultra accommodative policy, as the uncertain outlook for the global economy still warrants a flight to safety trade that should benefit the buck. As we have mentioned in previous reports, the more active intervention on behalf of the SNB and BOJ in recent weeks should make these currencies less attractive safe haven options which leaves the USD as the potential primary beneficiary of these flows. We are already seeing this play out a bit on Thursday with the USD emerging as the clear outperformer on the flight to safety price action.

Some markets that we recommend keeping an eye over the coming session in addition to the Euro (as discussed above) are Usd/Jpy, Aud/Usd, the Swiss Franc and gold. Usd/Jpy looks like it wants to break to yet another fresh record low below 76.25 and once it does you can bet that the intervention talk will heat up dramatically which could spark a good deal of volatility. Japan’s Npda has already been on the wires a number of times in recent trade warning of official action. Aussie has been in the process of recovering following a violent drop off in the previous week but could soon come under renewed pressure as it stalls just ahead of key technical confluence in the mid-1.0600 by the 20/50/100-Day SMAs and the 61.8% fib retrace off of the recent move. The Franc has found renewed bids after the SNB failed to come out as aggressive as they had suggested they would be in attempts to depreciate the currency, and it will be interesting if the measures in place are enough to still do the trick. For the time being, it seems as though they could be enough. Finally, gold prices remain exceptionally well bid and the yellow metal looks like it is prepping to accelerate to yet another fresh record high on its path towards the major psychological barrier at $2000.

Data released overnight was also not encouraging with UK retail sales failing to impress and Eurozone construction output coming in sharply lower than the previous print. Looking ahead, the calendar heats up in North America, with US CPI, initial jobless claims, existing home sales and the Philly Fed taking center stage. Also worth mention are Canada leading indicators and wholesale sales. 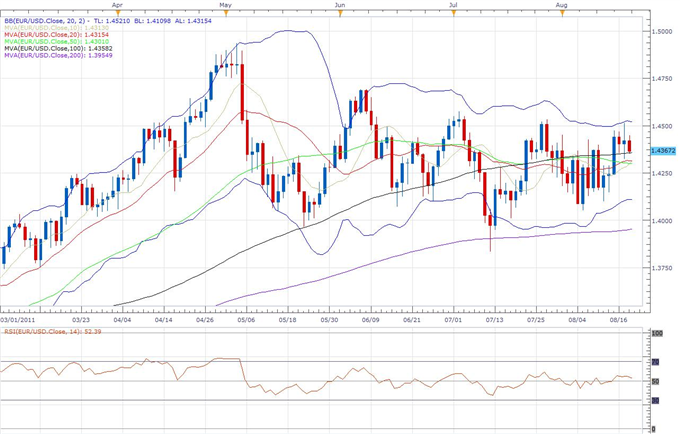 EUR/USD: The market continues to adhere to a bearish sequence of lower tops since May, with a fresh lower top now in place by 1.4535 ahead of the next downside extension back towards and eventually below 1.4000. In the interim, look for any intraday rallies to be well capped by 1.4500, while only a daily close back above 1.4535 negates. Short-term support now comes in by 1.4325 and a break back and close back below should accelerate declines. 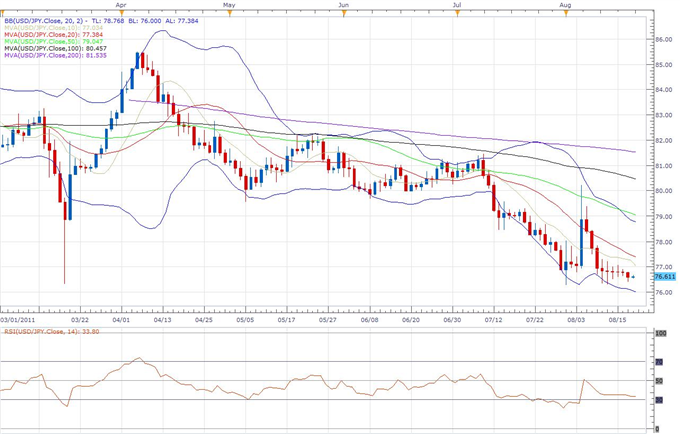 USD/JPY:Setbacks have stalled out just ahead of the 76.25 record lows from March, with the market dropping to 76.30 ahead of the latest consolidation. Given that we are seeing the rate by record lows, we would not at all be surprised to soon see the formation of a material base in favor of significant upside back above 80.00. However, the overall structure remains bearish and the risks are still tilted to the downside favoring a dip to fresh record lows into the 75.00’s before considering a fresh base. Back above 77.30 required at a minimum to relieve immediate downside pressures. 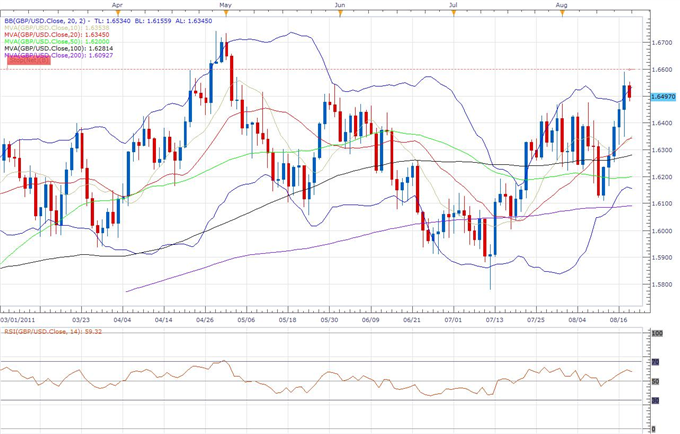 GBP/USD: The market remains locked in a broader consolidation off of the April highs, and a fresh top is now sought out somewhere around 1.6550 in favor of the next downside extension back towards the recent range lows at 1.5780. Ultimately, only a daily close above 1.6550 would delay outlook and give reason for pause, while back under 1.6350 should accelerate declines. 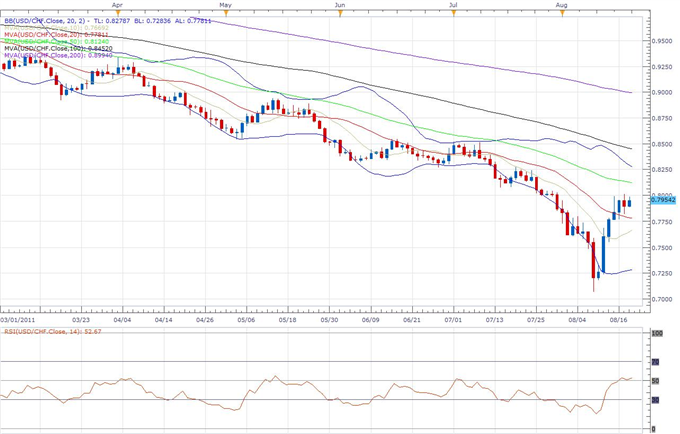