EUR/USD Short Taken at 1.4025; Latest News Not Supportive of Strength

The Euro remains well bid into the new week, with the single currency attempting to establish back above 1.4000 despite some Euro negative news in the form of a Moody’s Greece downgrade. The relative strength in the Euro comes on the back of a much more hawkish European Central Bank in the previous week, which has now signaled a move towards higher interest rates. Language from the ECB which included “strong vigilance” was seen driving the market towards 1.4000 on Thursday and things remained bid into Friday, with a slew of ECB officials confirming the need to start focusing on the normalization of rates in light of rising inflationary pressures. ECB’s Gonzalez Paramo was the firmest of the bunch after saying that “the risks to inflation are on the upside and it is the mission of the ECB to prevent those from materializing.” On the data front, Eurozone sentix has come in better than expected, and has helped to keep the market propped somewhat intraday.

Meanwhile, on the other side of the ocean, things have not been all that bad, with US economic data producing some impressive results including a drop in the unemployment rate back below the Fed’s late 2011 target of 9.0%. This could fuel some speculation of the need for the Fed to also start thinking about a reversal of monetary policy, which ultimately could help the Greenback mount a bit of a recovery. But at this point, the markets don’t appear to be taking this notion too seriously as the US Dollar remains under broad pressure.

We have however been seeing some relative weakness on the commodity bloc, with Kiwi, Aussie and Cad showing some offers in recent trade. The weakness in the New Zealand Dollar has certainly been the most prominent on the back of the devastating earthquake, but Aussie has also been offered on some softer local data, and weaker than expected results out of China. The Canadian Dollar is definitely the strongest of the bunch, but has started to show some solid sell interest over the past few days. We contend that a USD/CAD rate in the 0.9700’s is at an extreme, and the risks from here are for a sizeable upside reversal back above parity over the medium-term. Any additional setbacks should be limited from here and we do not expect to see a retest of the record lows by 0.9055 from November 2007.

Elsewhere, after showing some relative strength of late, the Pound has begun to stabilize, with the market once again finding offers against the buck just over 1.6300. Cable will need to establish a close above 1.6300 on Monday or risk the formation of a short-term top in favor of deeper setbacks towards 1.6000 over the coming sessions. The latest comments from Bank of England’ King are certainly not supportive, with the governor quoted in the Daily Telegraph as saying that imbalances in the banking system are beginning to grow again which may lead to another financial crisis unless reforms in that sector are undertaken. Still, broad based USD weakness and elevated inflation levels are giving bulls enough fire power for the time being.

Finally, geopolitical uncertainty and some elevated risk aversion have definitely helped to propel the Swiss Franc to record highs in recent trade, while somewhat hawkish comments from SNB’s Jordan in the previous week have also not hurt the plight of the Franc. There are no key data releases out of Switzerland on Monday, and we expect that these broader themes will continue to influence the direction. Nevertheless, we also contend that the strength of the local currency has now reached major levels of discomfort for the local economy and despite Jordan’s comments, we would not at all be surprised to see some major profit taking on Franc longs over the coming days. From a technical perspective, we are very bearish on the Franc at current levels and project major upside in USD/CHF over the coming months.

On the strategy side, we will depart from the normal currency talk and move to commodities which are arguably a little more compelling considering oil’s recent surge and gold’s ascent to fresh record highs. But as contrarians, we are always looking to fade excessive moves, and the latest surge in these commodities has been far too aggressive for our liking. While it may be a little too risky to short oil or gold straight up, we like the idea of pitting one commodity against the other and eliminating other variables. Technically, although gold is trading by record highs, it is oil that is more significantly overbought, and oil which has been the more volatile and less predictable of the two. As such, we recommend t considering a short OIL/GOLD position this week, as we see good risk for some relative weakness in the black gold.

Looking ahead, the light Monday economic calendar picks up a bit in North America. But, it seems like the markets might be more focused on official speak, with Fed Fisher and Fed Lockhart on the docket. US equity futures are tracking marginally higher, while commodities defy gravity and remain very well bid. 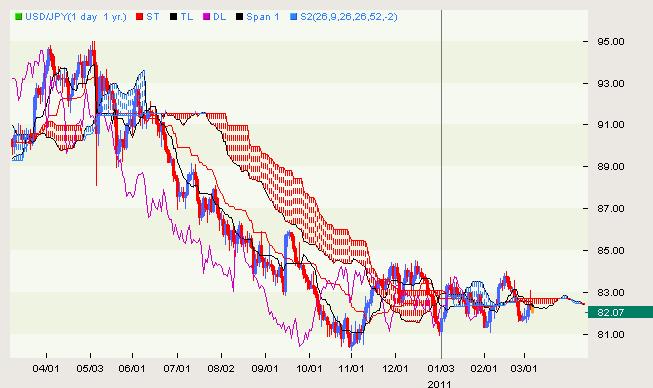 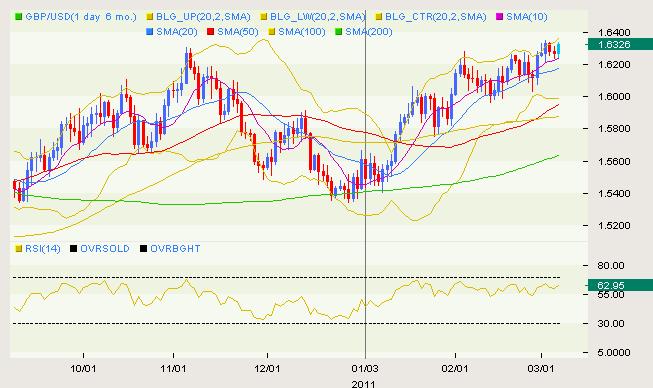 GBP/USD: After failing to establish above 1.6300 over the past several weeks, the market finally managed to break and close above the level to suggest that a fresh upside extension towards 1.6500 could be underway. However, failure to hold above the figure once again leaves us doubting the latest move, and a break and close back below 1.6215 would confirm our suspicions and open the door for a key bearish reversal. For now we remain sidelined until a clearer opportunity presents. 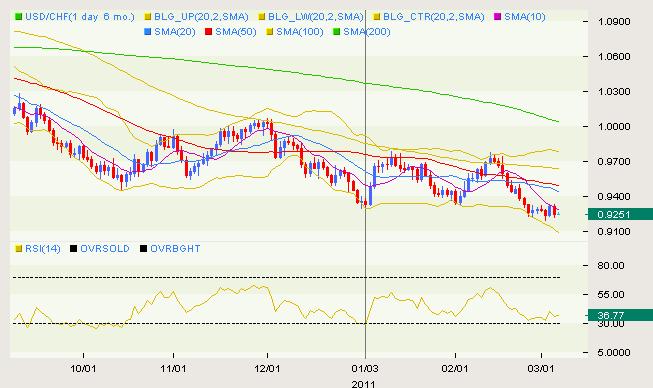 USD/CHF: The latest break to fresh record lows by 0.9200 is certainly concerning and threatens our longer-term recovery outlook. Still, we do not see setbacks extending much further and continue to favor the formation of some form of a material base over the coming weeks in favor of an eventual break back above parity. From here, big figures become key support as we are in unchartered territory, while a weekly close back above 0.9330 would help to encourage bullish reversal prospects. 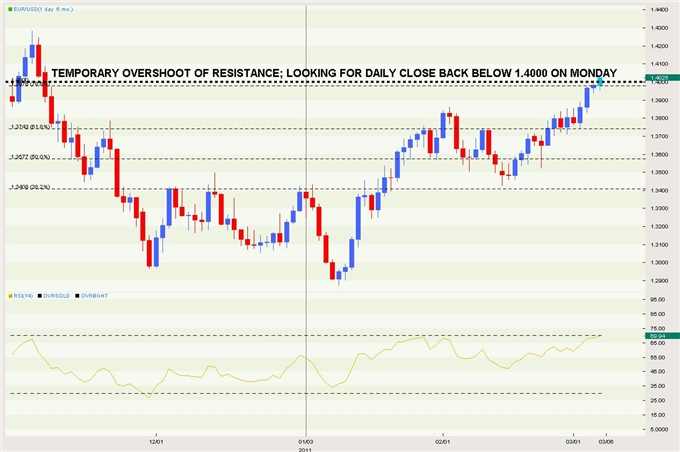 EUR/USD: The latest surge towards and through key range resistance by 1.3975-1.4000 looks to be a little too aggressive and overdone in our opinion and from here we would not expect to see sustainable gains above 1.4000. While we would not rule out the potential for an eventual retest and assault on the November 2010 highs at 1.4280, the risks from here are for a shorter-term bearish reversal back towards the 1.3600-1.3800 area. Look for confirmation on a close back below 1.4000 on Monday with acceleration expected on a break below 1.3940. Inability to close back below 1.4000 will however force reevaluation. POSITION: SHORT @1.4025 FOR AN OPEN OBJECTIVE; STOP 1.4175.

Middle East supply seen in Cable ahead of 1.6350 barrier. A UK clearer buying Aud/Usd with a US investment bank reducing its Aud holdings. Corporate demand in Eur/Gbp along with a Middle Eastern account and fix related buying with a US prime name as a noted seller. Local names continue to bid Usd/Cad on weakness. Exporter offers in Usd/Jpy. Large buy side shop exiting short Usd/Chf position.