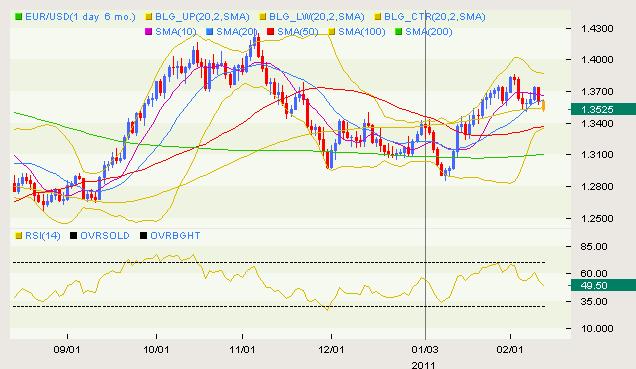 Currencies are extending declines on Friday, with the Euro looking to test next key downside barriers by 1.3500. There is no doubt that some stabilization on the geopolitical front (Mubarak delivered transfer of power speech) in recent days has helped to lighten up safe-haven bids in the Franc and Yen, but tensions are still running high and more protests on Friday could turn things back around. These tensions are already weighing on US equity futures ahead of the open. Meanwhile, a good deal of the broader USD strength has come from news of the ECB coming in to support distressed Portugal debt and a much stronger initial jobless claims result out of the US on Thursday. Also seen propping the buck has been a surge in US wholesale inventories which sent a positive message of demand-driven inventory restocking in the Untied States.

Relative Performance Versus USD Friday (As of 10:30GMT)

After relenting a bit to some of the other major currencies on Thursday, the Australian Dollar is once again relatively underperforming into Friday with RBA Steens giving a more bearish than expected testimony in front of the House of Representatives. Stevens’ comments that it was reasonable for the central bank to not raise rates for some time given the catastrophic floods which would likely wipe off 1% from Q1 GDP, were enough to ignite a fresh round of Aussie selling below parity. However, it is worth noting that Stevens was not all dovish after saying that monetary policy is not too tight. Also seen weighing on the antipodean has been the news of China imposing punitive reserve requirement measures on some small and medium sized domestic banks in an effort to curb inflation.

Elsewhere, there has been a lot of talk this week about Bundesbank chief Weber and the news that he would not be pursuing the ECB presidency after Trichet steps down in October. According to insiders, German Chancellor Merkel is now expected to pressure Weber to resign his office in light of this news and the two are scheduled to meet at some point today to discuss Weber’s future. Any developments on this end should be paid attention to as they could very well have some market moving influence.

On the data front, UK producer prices were released in European trade, with a much hotter than expected result to further add to the case for the hawks. However, elevated inflation is not the only problem the local economy is facing right now, and we contend that the Bank of England will continue to leave rates at ultra accommodative levels until more signs of sustained economic recovery emerge. Price action seems to confirm our view, with Cable still very much under pressure following the data release.

Looking ahead to North America, Canada international merchandise trade (-0.3B expected) and the US trade balance (-$40.5B expected) are due at 13:30GMT, with University of Michigan confidence (75.0 expected) rounding things out for the week at 14:55GMT. US equity futures are tracking a good deal lower ahead of the North American open, while gold is also offered and oil trades flat.

EUR/USD:The latest rallies have stalled out well ahead of 1.3860 with the market finding some resistance by an ideal right shoulder top in the mid-1.3700’s ahead of the latest sharp setbacks. From here, the risks are tilted to the downside, with a break and close back below 1.3570 to like trigger the H&S topping formation and open a fresh downside extension towards the 1.3200 area over the coming days. Any rallies should continue to be well capped ahead of 1.3700 with only a break back above the figure to give reason for concern. 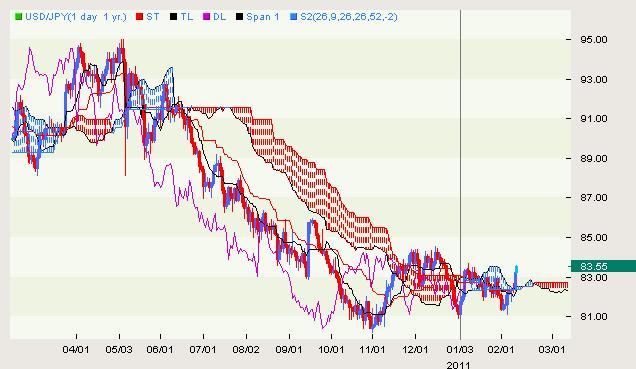 USD/JPY: The market continues to remain extremely well bid on dips below 82.00, with the latest surge back above 83.00 really encouraging longer-term recovery prospects and opening the door for a potential break of key topside resistance by 84.50 over the coming days. Longer-term cyclical studies certainly suggest that the market could be poised for a major bullish reversal and we would look for a break and weekly close back above 84.50 to help confirm outlook. A break back below 82.00 would concern, while ultimately, only a back below 81.00 would negate. 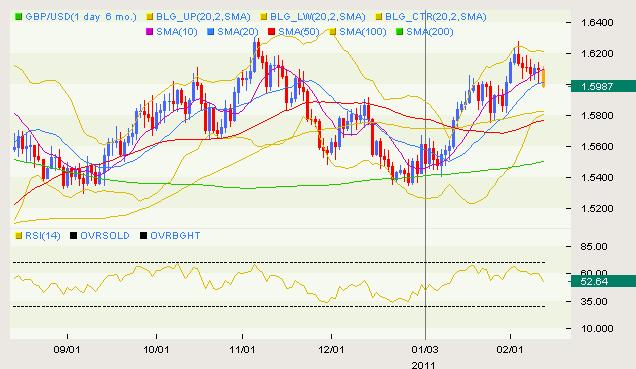 GBP/USD: The market looks to have once again found a meaningful top by the 1.6300 barrier, with the latest setbacks resulting in a series of daily lower tops. From here we look for a break and close back below 1.6000 to confirm bias and accelerate declines back towards 1.5750 over the coming sessions. A daily close back above 1.6200 would give reason for concern, while ultimately only back above 1.6300 negates. 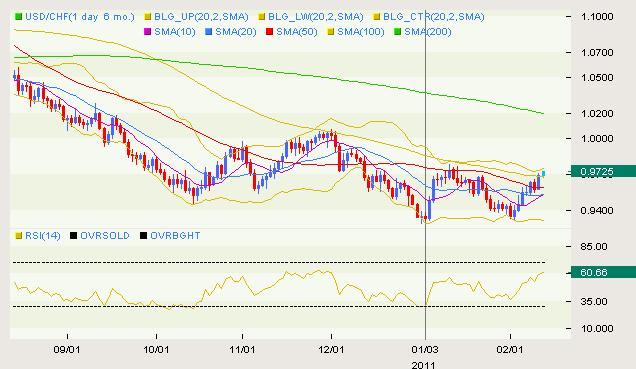 USD/CHF: Although the longer-term market remains under some intense pressure with the latest declines stalling just shy of the late 2010 record lows at 0.9300, inability to establish fresh record lows followed by a break back above 0.9500 leaves us constructive with our outlook from here. Next key topside barriers come in by 0.9785 and we now look for a weekly close above this level to accelerate gains and open a fresh upside extension back above parity and towards 1.0070 medium-term resistance from December 2010. Any setbacks from here are expected to be well supported ahead of 0.9500.