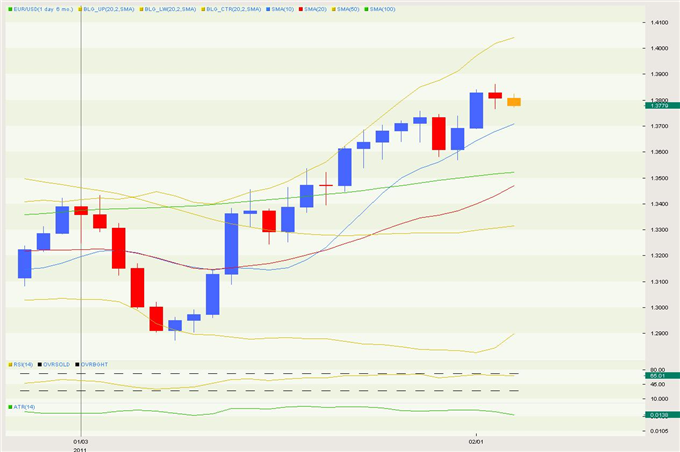 The markets have been relatively quiet on Thursday into the European open with most of the major currencies consolidating their latest moves and locked in holding patterns ahead of the next source of volatility. In a couple of hours, the ECB will come out with a decision on interest rates, and although the actual rate will almost certainly be left unchanged at 1.00%, all eyes will be on European Central Bank President Trichet for any clues at future direction of monetary policy. Recent comments from the central banker relating to inflation have helped to bolster the Euro and it will be interesting to see if he goes ahead and reaffirms his concerns over rising inflationary pressures.

Relative Performance Versus USD Thursday (As of 10:30GMT)

For now, the Euro has stalled out ahead of 1.3900 with good supply seen by the figure aided by more news of geopolitical risk out of Egypt on reported bloodshed from the political upheaval, words from a German government source that the country is against the EFSF rescue fund buying bonds from beleaguered Eurozone economies, and fears over a poor Spanish auction result. Meanwhile, on the other side of the coin, Fed Duke has not been helping the US Dollar’s cause at all after coming out overnight and talking of possible Q3 ahead. Technically, we have seen most of the major currencies stall out to potentially warn of some form of a top against the buck, but we still need to see some downside follow through on Thursday to confirm reversal prospects in favor of the Greenback.

Elsewhere, the antipodean currencies have been moving in opposing directions on Thursday, with the Australian Dollar bid up on the back of some much stronger building approvals and a less damaging cyclone impact, and Kiwi well offered following a disastrous unemployment rate which came in at 6.8% after the market had been looking for a 6.5% print.

European economic data was on the whole quite solid, with a slew of Eurozone services PMIs coming in slightly better than expected, while UK services PMI was much better than forecast. The very solid UK data has continued to benefit the Pound which has been a relative outperformer in recent sessions. Also out in European trade was Eurozone retail sales which were much softer than forecast.

Looking ahead, all eyes turn to the ECB rate decision at 12:45GMT, followed by US initial jobless claims, continuing claims, non-farm productivity and unit labor costs at 13:30GMT. US ISM non-manufacturing is then out at 15:00GMT, along with factory orders. On the official circuit, Fed Chair Bernanke is slated to speak at 17:30GMT. US equity futures flat, while oil and gold move in opposite directions, with oil higher and gold lower.

EUR/USD:Rallies have stalled out for now ahead of 1.3900, with the market reversing mildly on Wednesday to put in a bearish doji-like close. From here, there is a risk for the start of a pullback, but a break and daily close back below 1.3765 will be required to confirm and officially relieve short-term topside pressures. A daily close back above 1.3860 will negate reversal prospects and open the door for the next upside extension towards the 1.3980-1.4000 area (78.6% fib retrace/psychological barrier) further up. 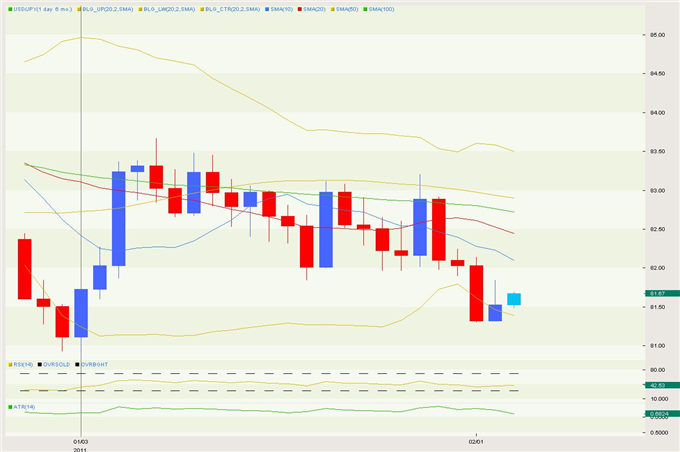 USD/JPY: Despite the latest setbacks below 82.00 which have put the pressure back on the downside, the market remains well bid on dips towards 81.00. A break and close back below 81.30 on Thursday will open the door for fresh downside towards the multi-year lows from late 2010 by 80.25, but at the same time, should the market manage a close back above 82.00, we could see yet another successful basing attempt with the potential for a more significant recovery back towards and eventually beyond 84.50. In the interim, best to stay on the sidelines and await a clearer signal. 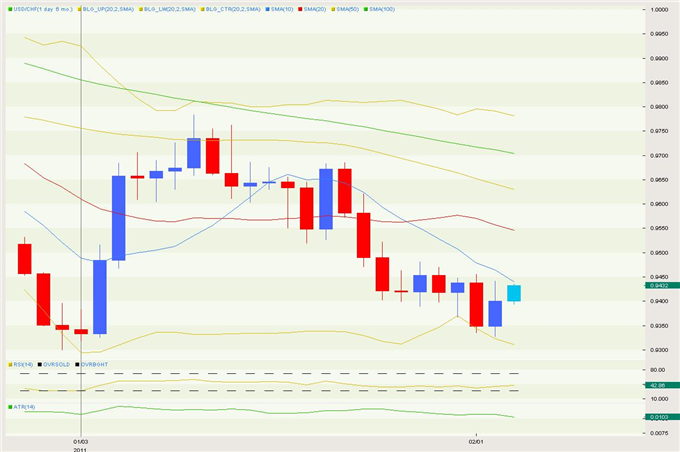 USD/CHF: Although the market remains under some intense pressure with the latest declines stalling just shy of the late 2010 record lows at 0.9300, inability to establish fresh record lows on Wednesday followed by a break back above 0.9400 leaves us somewhat constructive with our outlook from here. Look for a break and close back above 0.9445 on Thursday to confirm bullish bias and accelerate gains. Back below 0.9300 will of course negate outlook and give reason for pause.

Middle Eastern offers in GBP/USD above 1.6300. Leveraged names on the bid in GBP/CHF. Solid bids in USD/JPY from various buy-side shops; real money accounts on the offer. Local names buying USD/CAD dips. Model funds and a US bank reportedly buying Aussie; offers ahead of 0.9200. Sell-stops reported in EUR/USD below 1.3765. 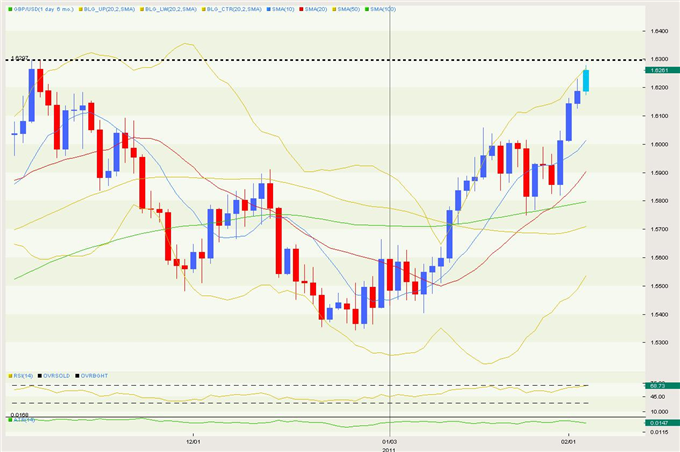 GBP/USD: The market has been very well bid since reversing sharply in the previous week, with the rally now totally negating any short-term bearish sentiment following the break back above 1.6060. From here, there is scope for a complete retracement of the Nov-Dec high-low move, with a potential retest and break of 1.6300 over the coming session. However, intraday studies are looking very stretched at this point and any additional rallies on Thursday beyond 1.6300 should be met with some very heavy sell orders as shorter-term market participants look to book profits on existing longs. We will look to take advantage of any moves above 1.6300 and will happily establish a fresh counter-trend short position on a break above the figure. STRATEGY: SELL @1.6320 FOR AN OPEN OBJECTIVE; STOP 1.6420. RECOMMENDATION TO BE REMOVED IF NOT TRIGGERED BY NY CLOSE (5PM ET) ON THURSDAY. 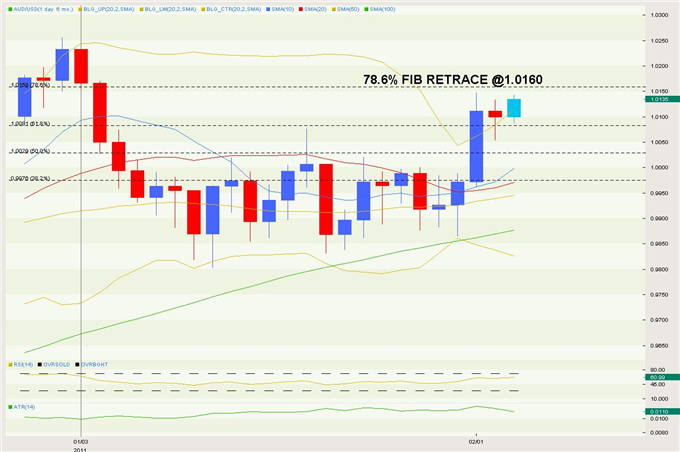 AUD/USD: The latest topside failure just ahead of a key 78.6% fib retrace off of the Dec-Jan high-low move and subsequent bearish close suggests that the market could be ready to stall out ahead of renewed weakness. Wednesday’s bearish doji-like close screams of indecision from bulls and we like the idea of selling at current levels in anticipation of a major bearish reversal over the coming days and weeks. We have placed a wide stop above the critical multi-year and post float record highs by 1.0260 (recommended 0.5-1.0X leverage) and will be looking for a minimum downside extension towards 0.9800. While we recognize and have cited the latest bearish close as justification for the trade, we also recognize that the market still might rally a bit before ultimately reversing in our favor. In the interim, look for a break back below 1.0055 to get things going to the downside. POSITION: SHORT @1.0100 FOR AN OPEN OBJECTIVE; STOP 1.0305.