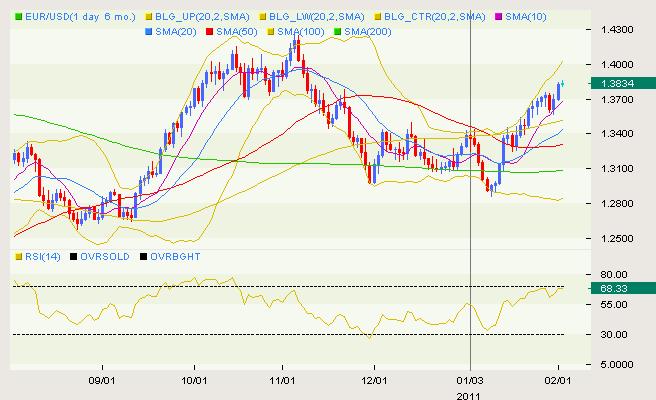 The dynamic of the FX market has certainly changed over the past few days and what was once a corrective bounce in currencies has now turned into a potential legitimate rally against the Greenback. While Eurozone fundamentals have improved and the region is gaining a better hold on the debt crisis, we are still unsure whether the current rally is completely justified given that nothing that much has really changed in our opinion. Nevertheless, our opinion is irrelevant and the markets will do what the markets will do. Right now it seems as though the prevailing flows are intent on continuing to pressure the US Dollar until proven otherwise. At this point, the proximity to psychological barriers by 1.4000 is certainly a factor and many will now be focusing on a test of this level over the coming sessions.

Relative Performance Versus USD Wednesday (As of 11:30GMT)

The broader price action has resulted in a Swiss Franc that is on the verge of establishing fresh record highs against the buck, and a Canadian Dollar that is contemplating a rally to its own fresh multi-month highs. Meanwhile, both the Yen and Australian Dollar are inching nearer to their record levels. Risk appetite and surging US equities have been a major influence on the currency rally, but here too we are somewhat skeptical, particularly in reference to the Australian Dollar which seems to be more exposed given some softer economic data of late and lower inflation readings. The latest data out from the antipodean has produced a weaker HIA new home sales print and this in conjunction with a category 5 cyclone that is set to hit Queensland (already hit by severe flooding in recent weeks), leaves us quite bearish on the Australian Dollar on a relative basis.

Technically, we find that when markets are trending in one direction, Wednesday’s are often a very good day for reversals to take hold. It seems as though the midpoint position within the week is used as a logical level for some profit taking. While there is no indication of any such reversal just yet, we think it is a point worth mention. So far though in Europe price action has been generally consolidative in nature with the exception of the pound which is outperforming on the day after a much better than expected PMI construction reading. The euro remains relatively unmoved despite a slightly better than expected PPI reading as some traders await President Trichet’s comments at his usual press conference tomorrow after the ECB event risk.

Looking ahead, the economic calendar in US trade is quiet with MBA mortgage applications due at 12:00GMT, followed by Challenger job cuts at 12:30GMT and some oil inventory data at 15:30GMT wrapping things up for the session.

EUR/USD:The bearish reversal day from last Friday has now been completely negated with the market racing back above 1.3760. While we would not get overly bullish at current levels, the break and close back above 1.3760 on Tuesday could very well open a fresh upside extension towards 1.4000 (78.6% fib retrace off of the Nov-Jan move comes in by 1.3980). However, inability to establish above 1.3800 on Wednesday would suggest that price action is somewhat exhausted and could set up a short-term topping formation. As such, the preferred strategy is to stand aside for now until a clearer signal presents. 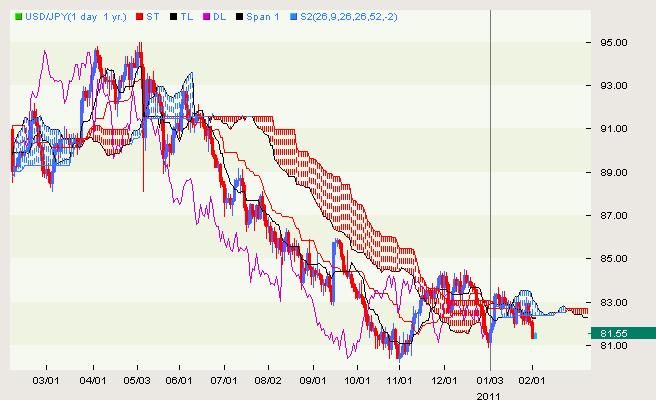 USD/JPY: The market appears to be locked in some consolidation with clear directional bias not easily determined. The latest rally has stalled out by the Ichimoku cloud top to suggest that the pressure still remains on the downside for now. Tuesday’s daily close back below 82.00 should accelerate declines and expose the multi-year lows from 2010 just ahead of 80.00, while only back above 83.70 will relieve downside pressures and shift structure back to the topside. In the interim, we remain sidelined and await a clearer signal. 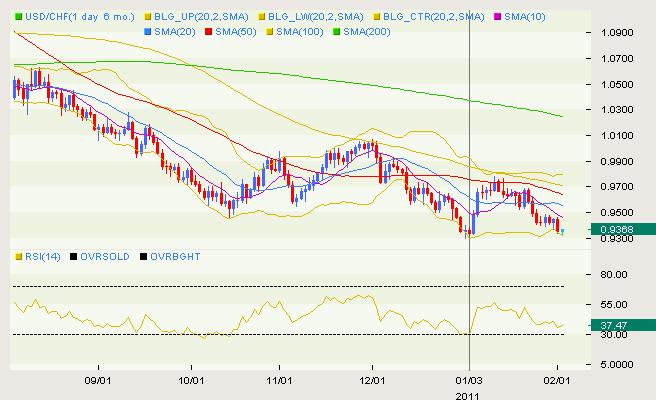 USD/CHF: The market has failed to hold above the 0.9400 figure as we had wanted with Tuesday’s daily close back below the figure now exposing a retest and break of the 31Dec record lows by 0.9300. A clear break and close below 0.9300 will open a fresh downside extension eyeing next major psychological barriers by 0.9000, while inability to establish below 0.9300 will suggest that the market is still attempting to base out in favor of an eventual longer-term rally out from major cycle lows. In the interim, we remain sidelined and will wait for a clearer signal.

North American corporate demand seen in Usd/Cad, offers from Russian and Middle Eastern names in Cable around its peaks. Profit taking seen in Eur/USd by a Middle Eastern account and a UK clearer. 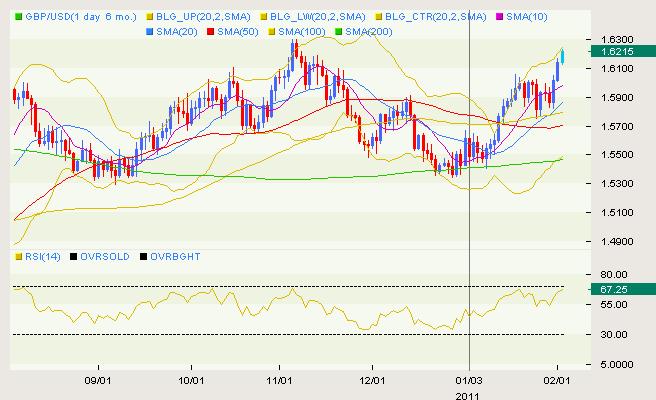 GBP/USD: The market has been very well bid since reversing sharply in the previous week, with the rally now totally negating any short-term bearish sentiment following the break back above 1.6060. From here, there is scope for a complete retracement of the Nov-Dec high-low move, with a potential retest and break of 1.6300 over the coming session. However, intraday studies are looking very stretched at this point and any additional rallies on Wednesday to 1.6300 should be met with some very heavy sell orders as shorter-term market participants look to book profits on existing longs. We will look to take advantage of any moves to 1.6300 and will happily establish a fresh counter-trend short position on a test of the figure. STRATEGY: SELL @1.6300 FOR AN OPEN OBJECTIVE; STOP 1.6425. RECOMMENDATION TO BE REMOVED IF NOT TRIGGERED BY NY CLOSE (5PM ET) ON WEDNESDAY.