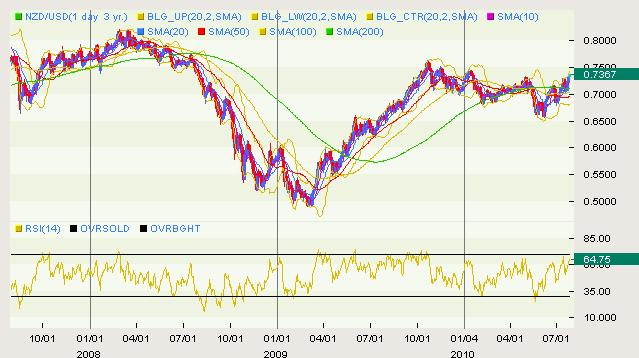 At the moment, it seems as currencies can do no wrong, with the USD being sold quite heavily over the past several weeks, despite ongoing concerns over the state of the global economy. The general consensus is that we are in the process of a recovery and although it may take some time, the risks for a double dip recession have gone away, and with this in mind, it appears to be time to once again pour out of the safe haven appeal of the Greenback and into higher yielding currencies with more stable outlooks.

Relative Performance Versus USD on Tuesday (As of 10:30GMT) –

Talk of structural problems within the US have also crept back in, and this theme which had been absent for some time, has certainly weighed on the Buck. While it is certainly true that the European stress tests were conducted with some very loose standards, the fact that the Eurozone banking system is now more transparent has been offset by any drawbacks from a wishy-washy test. As such, it now seems as the only chance for the USD, given the Fed’s commitment to keep monetary policy ultra accommodative for an extended period of time, is for the markets to once again come under some intense pressure on a rapid resurgence in risk aversion.

The safe haven appeal of the buck is therefore the only appeal of the USD and although we are not in favor of this outlook, it looks as though the USD will continue to slide. Before the onset of the global crisis, many analysts were calling for a long-term decline in the Greenback, and any gains resulting from the crisis were deemed to be short-lived. We are now starting to see the proponents of this theory sell the USD more aggressively, with the Euro finding a low by 1.1800 and bouncing sharply since. The commodity bloc currencies have also failed to materially weaken throughout the crisis, while demand for EMFX remains quite strong. Those that have argued in favor of the decoupling theory are now looking good, and as USD bulls, there is certainly reason for concern. Nevertheless, we have not abandoned hope.

Our bullish outlook on the USD is based on a combination of technical and fundamental factors which we would argue could still result in a stronger USD going forward. In our opinion, the US was still the first major economy to suffer at the hands of the downturn within the global economy, and should in turn be the first economy to truly emerge from this mess. While the USD has benefited greatly on its safe haven appeal throughout the crisis, there should be room going forward for the single currency to find solid bids in US economic recovery. Any signs of a sustained recovery will prompt the Federal Reserve to begin to shift its monetary policy, with an aggressive treatment of rate hikes to likely narrow yield differentials substantially back in favor of the buck.

Although we have not seen this play out just yet, we hold onto this view, and will continue to look for opportunities to fade currencies in favor of the buck should the USD continue to decline over the coming weeks. Longer-term technical studies show plenty of room for additional USD gains and this helps to reaffirm our still constructive medium-term USD outlook.

Some interesting price action in Tuesday trade, with Swissie and Yen standing out as all other currencies pretty much have managed to sustain their general bid tone against the buck. While we are well aware of the risk correlations with the Yen, similar correlations in the Swissie have become all the more apparent. The Swiss Franc has been sold heavily overnight on the back of the improved sentiment, while there has also been a good deal of talk revolving around SNB related bids in Eur/Chf that have helped to accelerate the rally.

On the data front, the Swiss UBS consumption indicator rose to its highest level since July of 2008, although there was a downward revision to the previous print. Elsewhere, German GfK consumer confidence and import prices were stronger than consensus, while Eurozone M3 came in firmer and UK CBI reported sales were much stronger.

Looking ahead, it will be interesting to see how things play out in North American trade, with the market quite volatile and seemingly all over the place at present. Case Shiller (3.85% expected) is due out at 13:00GMT, followed by consumer confidence (51 expected) and Richmond Fed manufacturing (12 expected) at 14:00GMT. US equity futures point to s stronger open, while oil is slightly bid and gold flat.

EUR/USD: Price action has been extremely choppy and unpredictable since the market topped out by 1.3030 a few days back and it is unclear at this pint in time whether we are on the verge of carving out a medium-term lower top or are prepping for the next upside extension towards the 1.3200 area. Key levels to watch above and below come in by 1.3030 and 1.2730 respectively, and a sustained break on either side will be required to establish a clearer directional bias.

USD/JPY: The latest round of setbacks below 87.00 have been very well supported and daily studies have now turned up from oversold levels with the market looking like it wants to carve out a base. Look for additional gains over the coming sessions back towards 89.15, with a break of this level to likely accelerate gains and force a more material shift in the structure. However, a close back below 86.25 would negate and shift focus back towards the multi-year lows by 84.80.

GBP/USD: The latest rally has stalled out ahead of key resistance just over 1.5500 and we look for a medium-term lower top to now carve out ahead of the next major downside extension below 1.5000. Key short-term support now comes in by 1.5000, and a break below this level will be required to confirm bearish bias and accelerate declines. However, a close back above 1.5500 delays outlook and gives reason for concern.

USD/CHF: The market could be in the process of carving out a material base after closing back above the 10-Day SMA on Friday. Any setbacks have been very well supported in the 1.0400 area and this should be encouraging for bulls. We look for some more bullish confirmation on a break above next key resistance by 1.0680 over the coming sessions. Back below 1.0400 would negate outlook and give reason for concern.

Sovereign accounts on the offer in Eur/Usd; model funds and leveraged names on the bid. Official bid rumors in Eur/Chf. Model funds on the bid in commodity currencies, with notable interest in Kiwi and Aussie. Well know bank recommends to start looking to buy USDs across the board.

NZD/USD: Medium and longer-term technical studies suggest that any rallies beyond 0.7300 should be short-lived, with the greater likelihood that the market will soon reverse quite sharply in favor of a major decline back towards 0.6600 over the coming weeks. With daily studies looking stretched, we like the idea of attempting to sell into an additional rally on Tuesday in anticipation of said reversal. Once again, we will use our ATR analysis to help isolate an entry point for the counter-trend play, and with a daily low by 0.7320, the 110 point average daily range projects a push to just below the 2010 highs at 0.7440. STRATEGY: SELL @0.7430 FOR AN OPEN OBJECTIVE; STOP 0.7530. RECOMMENDATION TO BE REMOVED IF NOT TRIGGERED BY NY CLOSE (5PM ET) ON TUESDAY.

If you wish to discuss this topic or any other feel free to visit out Forum Page.