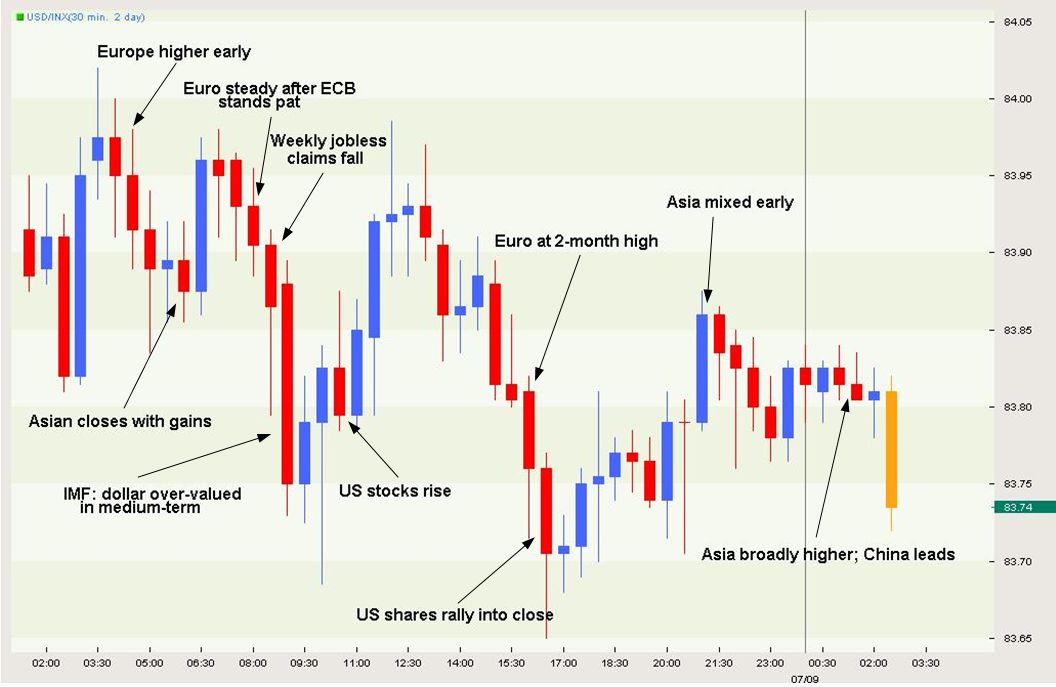 Starting to See Some Relative Weakness in the Franc; Will it Hold?

FUNDYS
The Euro managed to ascend to fresh multi-day highs on Thursday beyond 1.2700, and many are now buying into the inverse head and shoulders base that was triggered in the previous week, which projects additional gains beyond 1.3000. A combination of stronger labor data out of Australia, upbeat comments from ECB Trichet, solid German industrial production, and better than expected US initial jobless claims, have all contributed to the most recent rally in currencies.
Relative Performance Versus USD on Friday (As of 9:20GMT) –

1) STERLING +0.14%
2) YEN          -0.14%
3) KIWI -0.23%
4) CAD        -0.23%
5) EURO -0.28%
6) AUSSIE -0.44%
7) SWISSIE       -0.57%
Nevertheless, we remain skeptical of the rally and would continue to recommend that traders proceed with caution, as the state of the global economy still remains quite volatile and uncertain which would favor an eventual resumption of USD buying. We have already begun to see a mild USD recovery ahead of the North American open, and it will be interesting to see if this will continue in the final session of trade for the week
Our recommendation for trade on Friday is to watch price action in Eur/Usd closely for a clearer directional bias. While we would not rule out the potential for additional upside, any rallies over the coming hours should be very well capped ahead of 1.2850, with heavy selling from longer-term accounts to be expected into this area. The key level to watch below now comes in by 1.2620, and a break and close back below this level could also mark an end to the latest recovery rally and warn of a resumption of the broader underlying downtrend in Eur/Usd.
Another major currency pair to watch is Usd/Chf which trades at violently oversold levels as the daily RSI flashes well below 30. The Swiss Franc has been heavily bought since early June, and we believe the single currency could now be at risk for some major corrective downside. This in turn might offer some attractive long opportunities in Usd/Chf and Eur/Chf over the coming hours. The Franc is in fact the weakest currency in Friday trade, and is now attempting to put in a bullish reversal day after finally ending a sequence of consecutive daily lower tops.
Finally, Sterling price action has actually been quite interesting and many are scratching their heads, with the pound outperforming on the day and holding up quite well against the buck, despite a round of weak data over the past 48 hours which includes a softer than expected PPI and wider trade deficit on Friday. Key levels to watch above and below come in by 1.5245 and 1.5080 respectively, and we look for a break above or below for clearer directional bias. Other data released in European trade included an as expected German CPI which failed to materially factor into price action.
Looking ahead, Canadian data takes front and center stage in the North American session, with employment data (20k and 8.1% expected) due at 11:00GMT, followed by housing starts (192k expected) at 12:15GMT. US wholesale sales (0.4% expected) then caps things off for the week at 14:00GMT. US equity futures have given back some of the latest gains, while on the commodity front, gold and oil trade relatively unchanged.
GRAPHIC REWIND

TECHS
EUR/USD:  The market continues to extend gains as it fills out the triggered inverse head & shoulders pattern that was triggered in the previous week. However, our overall bias remains bearish and we would recommend looking to sell into rallies above 1.2800, with any moves above this figure likely to be well capped ahead of 1.2850. Key support now comes in by 1.2620 and a break and close back below this level will also shift the focus back on the downside.
USD/JPY: Despite the latest choppy directionless trade, our overall outlook remains highly constructive so long as the price remains above 87.00 on a close basis. Look for an eventual push back towards and through 95.00, above which should accelerate gains to next critical topside barriers by 100.00. Thursday’s break back above 88.20 confirms basing prospects and should now accelerate.
GBP/USD: The recent rally in the market has been classed as corrective with the pair looking to carve out a fresh medium-term lower top below 1.5500.  Gains have so far stalled out just over 1.5200, and while there is a risk for additional upside towards 1.5300, we do not see the rally extending much beyond. Instead, look for a break back below 1.5080 to help confirm downside bias and accelerate declines towards next support by 1.4870.
USD/CHF: The intense declines of the past several weeks continue, with the market dropping by some 12 big figures since early June from above 1.1700 down through1.0500 thus far. While daily studies are severely oversold, there has still been no direct sign of a bounce, and the risk from here is for additional weakness below 1.0500 to retest the multi-week platform base by 1.0435. However, as we have outlined, daily studies are dramatically overextended and a major upside reversal cannot be ruled out. Look for a break back above 1.0565 to confirm and accelerate.
FLOWS
Profit taking seen on long Swissie positions from a variety of longer-term accounts. Asian bids in Eur/Usd with sovereign accounts on the offer. Stops cited above 89.00 in Usd/Jpy. Real money action in Gbp/Aud.
Written by Joel Kruger, Technical Currency Strategist for DailyFX.com
If you wish to receive Joel's reports in a more timely fashion, e-mail instructor@dailyfx.com and you will be added to the "distribution" list.