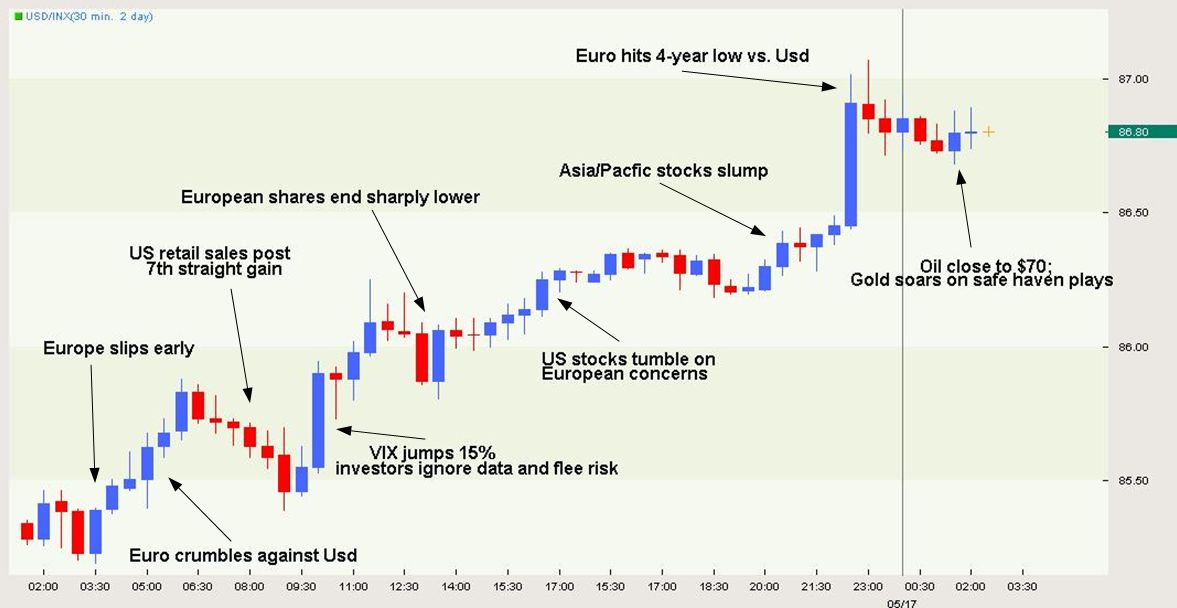 FUNDYS
The Euro easily broke below its 2009, 1.2330 lows in early Asian trade, and into the 1.2200’s thus far ahead of the latest minor consolidation. Technically oversold studies have failed to influence price action, and all major currencies have been tracking considerably lower against the buck on the day in sympathy to the Euro price action.
Relative Performance Versus USD on Monday (As of 9:50GMT) –

1) YEN         +0.10%
2) CAD          -0.18%
3) SWISSIE          -0.38%
4) EURO -0.40%
5) STERLING -0.82%
6) KIWI -0.88%
7) AUSSIE -1.08%
The general consensus is that the crisis in the private sector has now only shifted to a government debt crisis, with government bond purchases and fiscal spending reductions only seen exacerbating the situation. The UK Times has come out calling the Euro to parity, and this has also not helped to generate any bids for the beleaguered currency. ECB President Trichet adds that the markets are in the worst predicament since WWI, and has appealed for a “quantum leap” of fiscal governance.
While the Euro weakness has most likely been the catalyst for the major broad based currency sell-off, it is Sterling has also been hit quite hard and approaches next key downside barriers at 1.4000, which guard against the critical multi-year lows by 1.3500. The UK Times outlines concerns over an export led economic recovery in the UK, and also reports that the new government has come out accusing the Labour of having manipulated forecasts to help the previous government present the budget that it wanted to. Also adding to the relative Sterling weakness has been a Rightmove index which shows sellers of properties starting to lower their prices on the back of an ever weakening housing market.
Other data released in Monday trade has come out of Japan, but the solid core machinery orders and higher wholesale inflation have hardly factored into price action, with the Yen tracking higher mostly due to a negative carry environment. A disappointing Eurozone new car registrations has also been released but it too has had a negligible impact.
Elsewhere, clashes in Thailand and the news of more volcanic ash disruptions out from Iceland, have not been doing anything to help the extremely downtrodden investor sentiment on Monday. The Euro is now testing levels not seen since 2006, with the next major support coming in by 1.2000, below which exposes a drop into the 1.1600’s further down.
Looking ahead, UK CBI industrial trends are due at 10:00GMT, followed by US empire manufacturing (3.00 expected) at 12:30GMT, and TICs ($50B expected) at 13:00GMT.  NAHB house prices (20 expected) cap things off at 17:00GMT. US equity futures have recovered nicely and now point to a slightly firmer open, while oil has also recovered close to opening levels and gold trades flat.
GRAPHIC REWIND

TECHS
EUR/USD: The sharp declines continue with the market now easily taking out next key support in the form of the 2009 lows by 1.2330. From here, next key support comes in by psychological barriers at 1.2000, with the market now trading in territory not seen since 2006. Below 1.2000 then exposes a drop into the platform base from 2006 in the 1.1600’s. It is however worth noting that technical studies, both daily and weekly, are now highly oversold and we can not rule out the potential for a meaningful corrective bounce before considering bearish resumption. Key short-term resistance comes in by 1.2575, with a break above to potentially trigger said correction.
USD/JPY: The whipsaw price action from violent trade in early May has delayed our outlook but certainly does not change our overly constructive bias. The medium-term higher low from early March just over 88.00 remains intact, with the market stalling out ahead of the level, and we now look for a push higher from here back towards and through next key topside barriers by 95.00. Only a break back below 88.00 would negate and give reason for pause.
GBP/USD: The market has finally taken out the key 2010 lows by 1.4780 to confirm a fresh medium-term lower top by 1.5500 and open the next major downside extension towards critical psychological barriers by 1.4000 over the coming days. At this point however, with daily studies looking stretched, we would not rule out the possibility for a short-term corrective bounce back towards 1.4500-1.4700 to allow for daily studies to correct from oversold. It is worth noting that the 78.6% fib retracement off of the major 2009, 1.3500-1.7050 move, is now being tested in the 1.4200’s, and this area could provide the necessary support to help trigger a bounce.
USD/CHF: The overall outlook remains highly constructive and while daily studies do not rule out the possibility for some form a pullback to  allow for technicals to unwind, any setbacks should be very well supported ahead of 1.1100, in favor of an eventual push towards 1.2000. Friday’s close back above 1.1245 confirms bullish bias and opens next upside extension.