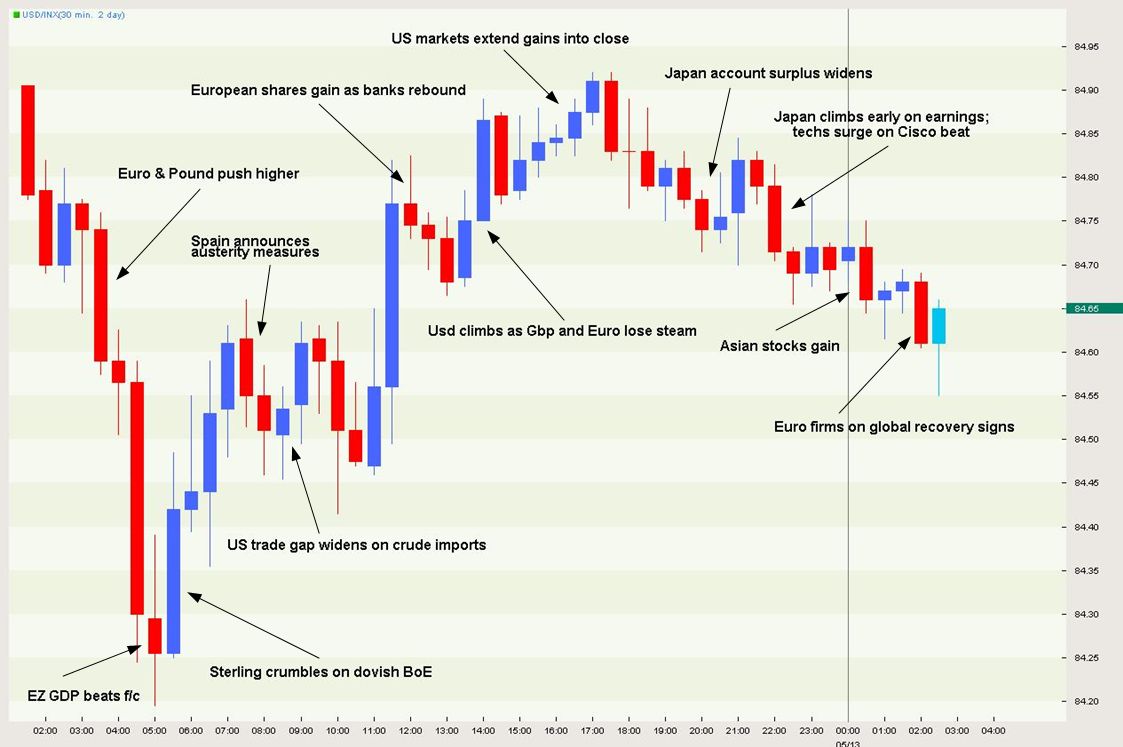 FUNDYS
As such, the more attractive commodity currencies have been tracking higher on the day, with the Australian Dollar leading the way on the back of its higher yield appeal and some encouraging data results on the domestic front.
Relative Performance Versus USD on Thursday (As of 10:55GMT) –

1) AUSSIE +0.57%
2) KIWI +0.56%
3) CAD        +0.41%
4) YEN         +0.40%
5) SWISSIE        -0.19%
6) EURO -0.24%
7) STERLING -0.42%
Australia’s April employment report has come in impressively strong, and the resilience of the local economy, even in the face of a broader global macro crisis, continues to make the antipodean a very attractive investment. While RBA Lowe was out expressing some concern over the potential contagion from the Eurozone, the central banker remained highly optimistic on his outlook for the Chinese economy.
A WSJ survey of economists has been getting some attention over the past several hours after revealing that 42% polled now feel that the Fed will hold off on raising rates until 2011 or beyond. This compares with only 28% a month earlier, which clearly suggests that the Eurozone debt crisis is factoring in to interest rate expectations. Meanwhile, Brazil FinMin Mantega has been on the wires expressing a different opinion, urging the Fed to raise rates so that the USD will rally. Mantega blames the US for global imbalances and is critical of a notable trend in advanced economies that intentionally weaken their currency to drive exports.
On the data front, Japanese loan growth continued to shrink, while the current account surplus widened and was well better than expected. Elsewhere, UK nationwide consumer confidence was released and although the data came in a point better than expected, it failed to show a recovery from March’s concerning 9 point drop, leaving room for some relative Sterling weakness. Sterling has been the weakest currency on the day thus far, with declines extending following the much wider than expected trade deficit.
The Eur/Chf cross rate has been getting a lot of attention today, with the market finally dropping to test critical barriers by 1.4000, before bouncing on talk of official bids. It is quite clear at this point that the SNB remains active in preventing an excessive appreciation in the Franc, but we would also not be surprised to see this intense downtrend break below 1.4000 over the coming hours.
The NY Times report of an investigation into eight of the major US bank by the New York attorney general has not helped risk sentiment, while Dubai concerns are also creeping back into headlines and forcing some safe-haven buying.
Looking ahead, US initial jobless claims (440k expected) and continuing claims (4590k expected) are due at 12:30GMT, along with the import price index (1.0% expected). On the official circuit, Fed Kocherlakota speaks in Wisconsin at 17:00GMT. US equity futures and commodities are tracking lower on the day.
GRAPHIC REWIND

TECHS
EUR/USD The acceleration of declines since breaking below 1.3000 has been intense and the market has now easily broken below what was next support by 1.2885 to trade just shy of 1.2500 thus far ahead of the latest bounce. While our overall bias remains extremely bearish on the pair over the medium-term, daily and weekly studies are in the process of undergoing a very much needed and healthy consolidation. However, a lower top could now be in place by 1.3100 ahead of the next fresh downside extension below 1.2530. In the interim, we remain sidelined.  Key levels to watch over the coming session come in by 1.2740 and 1.2530.
USD/JPY: The whipsaw price action from last Thursday’s violent trade has delayed our outlook but certainly does not change our overly constructive bias. The medium-term higher low from early March just over 88.00 remains intact, with the market stalling out ahead of the level, and we now look for a push higher from here back towards and through next key topside barriers by 95.00. Only a break back below 88.00 would negate and give reason for pause.
GBP/USD: The market has finally taken out the key 2010 lows by 1.4780 to confirm a fresh medium-term lower top by 1.5500 and open the next major downside extension towards next critical psychological barriers by 1.4000 over the coming weeks. At this point however, with daily studies looking stretched, we would not rule out the possibility for additional consolidation in the 1.4750-1.5000 are before considering a bearish resumption.
USD/CHF: The overall outlook remains highly constructive and while daily studies do not rule out the possibility for some additional short-term consolidation to allow for technicals to unwind, any setbacks should be very well supported ahead of 1.0900, in favor of an eventual push into the 1.1500-1.2000 area. Back above 1.1245 opens next upside extension.
TRADE OF THE DAY 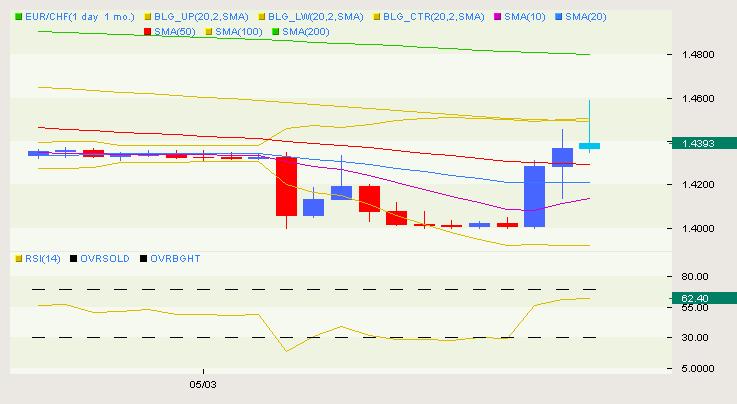 Eur/Cad: The market has been under intense pressure over the past several days and with daily, weekly, and monthly studies all showing highly overextended, a short-term corrective bounce is to be expected at a minimum. The average daily range in the currency cross is 175 points, and with a high already well in place by 1.2880, a projected low is now seen for today just ahead of 1.2700. Additionally, if triggered, intraday (hourly) studies will also be showing well oversold and in need of a bounce. STRATEGY: BUY @1.2725 FOR AN OPEN OBJECTIVE; STOP 1.2590. RECOMMENDATION TO BE REMOVED IF NOT TRIGGERED BY CLOSE (5PM NY) ON THURSDAY.