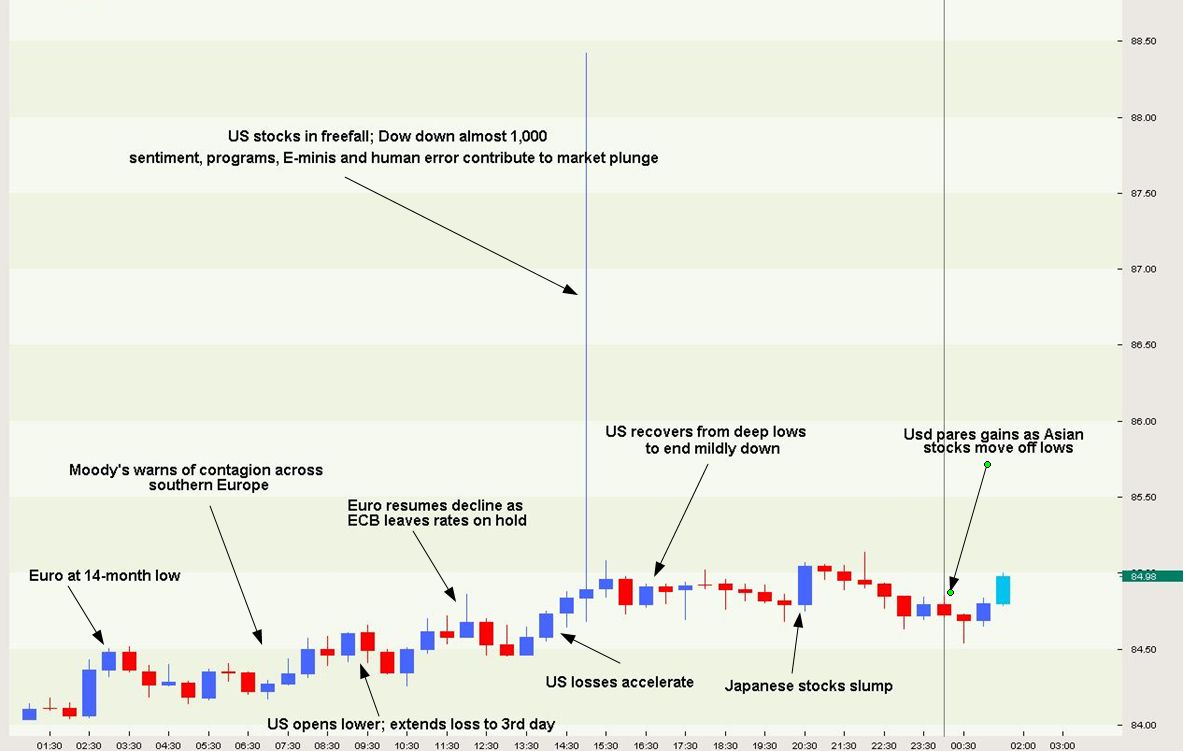 FUNDYS
The markets were initially unsettled in early North American trade on Thursday after ECB President Trichet failed to make any mention of additional monetary policy measures to alleviate some of the stress on the Eurozone economy resulting from Greece. In addition, traders were not comforted by the fact that the ECB President decided to accept Greek junk as collateral, which seemed to be in direct contradiction to what the central bank had said in the past.
Relative Performance Versus USD on Friday (As of 9:35GMT) –

1) EURO +0.90%
2) AUSSIE +0.38%
3) SWISSIE         +0.11%
4) CAD         +0.10%
5) KIWI -0.06%
6) YEN          -1.65%
7) STERLING -2.07%
The wave of panic was then seen escalating into the North American afternoon, after a number of US stocks traded down to $0 on an apparent glitch, which resulted in a massive panic and sell off in the DJIA of nearly 1000 points. Heavy selling in the major currencies and buying in the USD and Yen transpired, with commodities also getting hit hard, with the exception of gold, which managed to find strong bids on its safe haven appeal.
The markets have since managed to recover quite a bit, but it remains to be seen whether or not the risk aversion will continue into Friday trade. Many had discounted the possibility of a double dip recession scenario, while others did not believe that things were as bad outside of the United States. However, it now appears that this is exactly what is happening. Eurozone officials will need to come up with a more cohesive and unified strategy to re-infuse a sense of confidence into the markets. Otherwise, we could continue see traders bet against any favorable outcome and push the markets lower until proven wrong. This is the type of price action we saw when the US financial sector went into a tailspin, resulting in the collapse of some major financial institutions. So far there have been efforts made over the past 24 hours to show solidarity for a cohesive and defined support for Greece.
The one currency that has failed to show any pop and in fact has extended declines into Friday has been the Pound, which has absolutely been hammered on the elevated level of political uncertainty in light of what appears to be the first hung parliament since 1974. The timing couldn’t be any worse given the current state of the financial markets, and we could continue to see the single currency get wiped out on Friday. To add fuel to the fire, a weaker round of Halifax house price data, and a warning from Moody’s for a fiscal adjustment  have not helped to bolster any Sterling sentiment.
Some other developments that have affected price action on Friday include; comments from Japanese PM Hatoyama that he is concerned with the moves in the market and the government should act as needed to prevent such moves, suggesting that an intervention in Usd/Jpy can not be ruled out; comments from Australian Treasurer Swan that the Greece situation is manageable and the Australian economy and finances are in terrific shape; and news that the G7 FinMins are discussing the topic of Greece in a conference call today.
Looking ahead, all eyes are now firmly focused on this morning’s US NFP (176k expected) and unemployment (9.7% expected) data due at 12:30GMT. Some other employment data (20k and 8,2% expected) from Canada due a little earlier at 11:00GMT is also expected to generate some volatility. US consumer credit (-2.7B expected) rounds things out at 18:00GMT. US equity futures have been attempting to recover, while oil is also higher and gold lower.
GRAPHIC REWIND

TECHS
EUR/USD: The acceleration of declines since breaking below 1.3000 has been intense and the market has now easily broken below what was next support by 1.2885 to trade just shy of 1.2500 thus far. While our overall bias remains extremely bearish on the pair over the medium-term, daily and weekly studies are looking very oversold and it is becoming increasingly difficult to justify selling at current levels. Next critical support doesn’t come in until the 2008 lows by 1.2330, but we would expect to see a corrective bounce from where a lower top is sought out ahead of an eventual bearish resumption.  A break back above 1.2860 will now be required to relieve downside pressures.
USD/JPY: The whipsaw price action from Thursday’s violent trade might delay our outlook but certainly does not change our overly constructive bias. The medium-term higher low from early March just over 88.00 remains intact, with the market stalling out ahead of the level, and we now look for a push higher from here back towards and through next key topside barriers by 95.00. Only a break back below 88.00 would negate and give reason for pause.
GBP/USD: The market has finally taken out the key 2010 lows by 1.4780 to confirm a fresh medium-term lower top by 1.5500 and open the next major downside extension towards next critical psychological barriers by 1.4000 over the coming weeks. At this point however, with daily studies looking stretched, we would not rule out the possibility for a consolidation or corrective bounce back towards 1.5000 before considering a bearish resumption.
USD/CHF: It is hard to believe that with all of the broad based USD buying on Thursday, this pair actually managed to close lower on the day. Price action in the major was however heavily influenced by violent cross related selling in Eur/Chf. Nevertheless, the overall outlook remains highly constructive and while daily studies do not rule out the possibility for some additional short-term declines to allow for technicals to unwind, any setbacks should be very well supported ahead of 1.0900, in favor of an eventual push into the 1.1500-1.2000 area.
FLOWS
Massive stops from shorter term specs and CTAs cleared in Sterling across the board. Leveraged names on the bid in Eur/Usd. Model funds picking up Aud/Usd on dips. Local demand for Usd/Cad; corporate and real money offers. Some buy side names have been building Usd/Jpy longs at current levels.
TRADE OF THE DAY 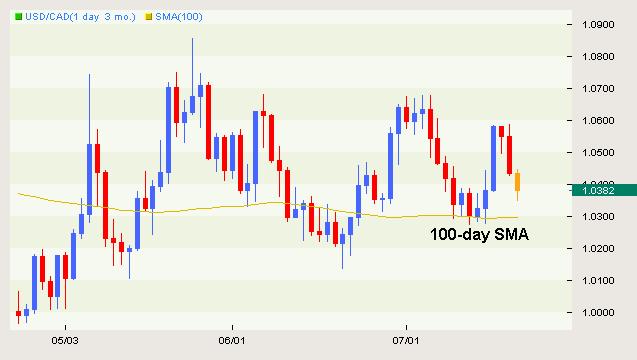 Eur/Gbp: (At this point it doesn’t look like this will trigger) We doubt it goes much higher today as the market has already tripled its average daily trading range of 100 points, but we will happily be waiting to sell into this parabolic move, should the rally continue to extend up towards next key resistance by 0.8865. The overall trend is still net bearish and we would expect to see some formidable resistance in the 0.8865 area should this level indeed be tested. This would give us the opportunity to take advantage of violently overbought intraday readings and establish a short position back into the overriding downtrend. STRATEGY: SELL @0.8860 FOR AN OPEN OBJECTIVE; STOP 0.8935. RECOMMENDATION TO BE REMOVED IF NOT TRIGGERED BY NY CLOSE. POSITION SIZE SHOULD BE UNLEVERAGED.
PORTFOLIO OVERVIEW
P&L Update and Overview: Many of you have been asking for a way to better track trading results and open positions. In response to these requests and in an effort to be fully transparent, a simulated portfolio has been created to track our results on a daily basis. We are pleased to announce that our model generated returns of 50% in 2009. The return on equity curve seen below has now been reset for 2010. 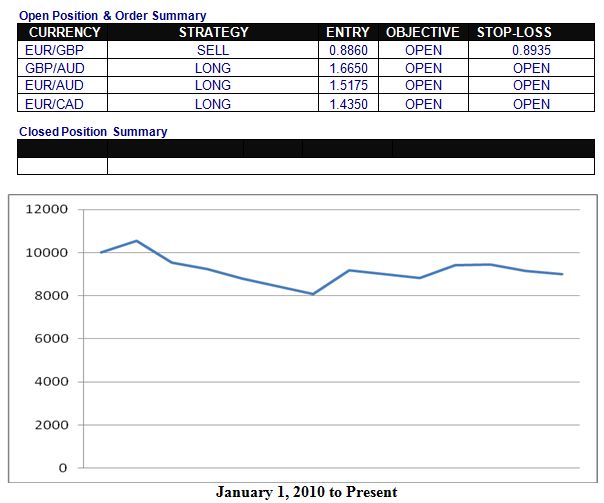