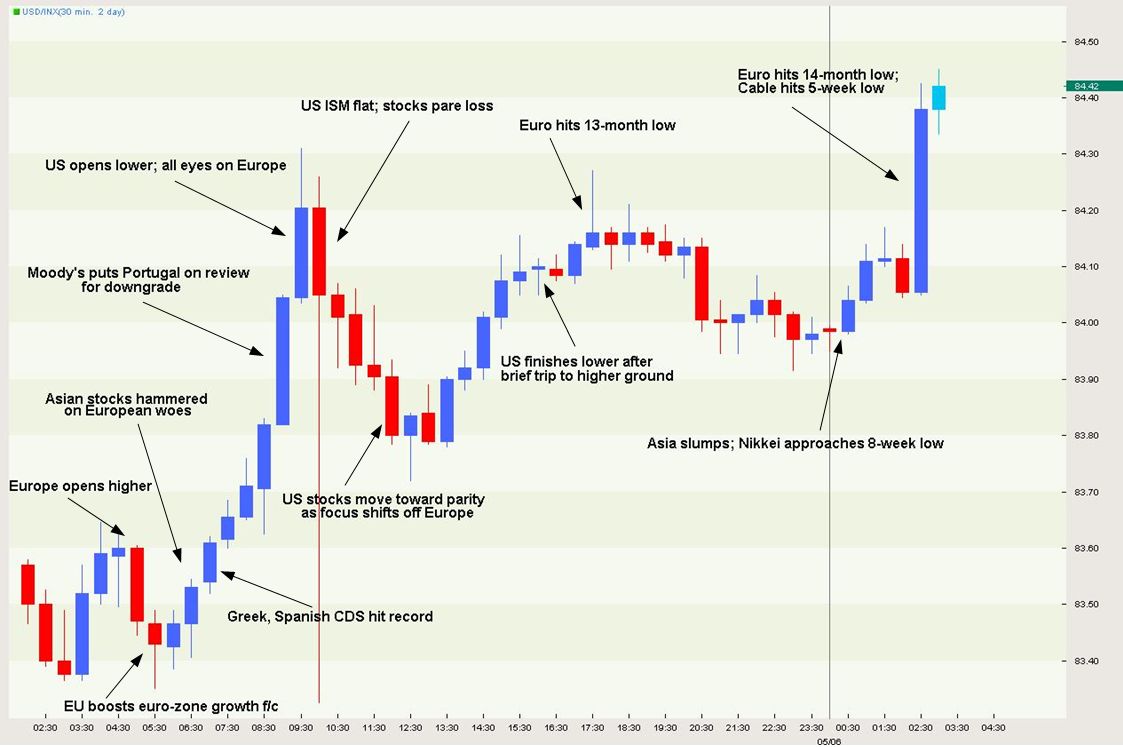 Global equities have been dropping intensely, while commodities have also come under pressure led by crude losses. There are however some currencies which have held up quite well on a relative basis, with Sterling, Aussie, Kiwi, and now Swissie retaining a strong bid tone against the Euro, despite the elevated risk aversion and flight to safety trade.
Relative Performance Versus USD on Thursday (As of 10:55GMT) –

1) KIWI +1.28%
2) SWISSIE        +0.53%
3) AUSSIE -0.01%
4) YEN          -0.02%
5) CAD         -0.17%
6) EURO -0.20%
7) STERLING -0.21%
The New Zealand Dollar is the star performer on the day and stands well above the other currencies after a much stronger and shocking unemployment result fueled some heavy buying in the single currency, with many investors reconsidering their outlook for an RBNZ, which had recently indicated that it would be on hold for a longer period of time than had been thought. The latest data release has dramatically increased the likelihood for a more near-term rate hike from the NZ central bank and as such, the currency has benefitted materially despite broader global macro themes which might normally weigh.
The second best performing currency is surprisingly the Swiss Franc, with the single currency rallying sharply on the back of some heavy stops tripped below 1.4300 in Eur/Chf. The evidence of SNB intervention in Eur/Chf had become more than clear over the past several days, with the cross rate barely moving more than 5 points in the face of some massive selling in Eur/Usd. Inevitably, the task of keeping the currency above 1.4300 proved to be too difficult, with the central bank removing their bids to result in a massive and violent wave of cross related selling into the lower 1.4200’s. Talk of official demand ahead of 1.4200 managed to prop additional setbacks, but seems like only a matter of time before this level is taken out.
Sterling has also held up quite well over the past few days, as evidenced by the heavy selling in Eur/Gbp, with the pound managing to find some bids on the crosses, even with the threat of a hung parliament following today’s election, and some weaker local data. Meanwhile, the Australian Dollar has also managed to hold its own, despite a weaker round of data in the form of soft retail sales and a wider than previous trade deficit.
Data in European trade was mixed with Swiss CPI coming in slightly firmer, while UK service PMI was a little softer. German factory orders capped things off for the session and were much better than analyst expectations.
The level of confidence in the Euro is staggeringly low, and European officials will need to do something to offer some form of support and reassurance in the coming hours, otherwise, there is a very real risk to continued depreciation. The ECB is set to meet later in the European session at 11:15GMT, and while it is more than widely anticipated that the central bank will leave rates on hold at 1.00%, all eyes will be on the post-decision Trichet press conference, which is sure to attract more than the usual amount of listeners.
Overall, it is the interesting divergence in what had been familiar correlations that leaves us scratching our heads. The relative strength in the commodity bloc currencies continues to confound, with market participants seemingly apathetic to the fresh wave of broad based risk selling in relation to their long commodity currency plays. While we realize that the direct pressure right now is on the Euro, the fact that an exodus from the higher yielding and riskier currencies has not manifest as it has in the past, suggests that the notion of decoupling  is very much alive. Many of these investors apparently feel that the slowdown in the US and Eurozone will not heavily impact the economies of Australia, New Zealand and Canada.
However, we remain very skeptical of this strategy and continue to see these currencies as highly overvalued and very much exposed to some relative weakness over the medium and longer-term. In our opinion, it is only a matter of time.
Looking ahead, the ECB rate decision (unchanged at 1.00% expected) is due at 11:15GMT, followed by the usual press conference shortly thereafter at 12:30GMT. Also out at 12:30GMT are US unit labor costs (-1.1% expected), non-farm productivity (2.3% expected), initial jobless claims (440k expected), continuing claims (4610k expected), and Canadian building permits (0.7% expected). Canadian Ivey PMI (55.5 expected) is set for release at 14:00GMT, with US ICSC Chain store sales capping things off at 14:30GMT. On the official circuit, Fed Evans speaks at 13:20GMT, followed by Fed Chair Bernanke at 13:30GMT. Fed Parkinson is due out a little later at 14:50GMT. US equity futures and commodities are tracking higher on the day.
GRAPHIC REWIND

TECHS
EUR/USD:  The acceleration of declines since breaking below 1.3000 has been intense and the market has now easily broken below what was next support by 1.2885 to trade well into the 1.2700’s thus far. While our overall bias remains extremely bearish on the pair over the medium-term, daily and weekly studies are looking very oversold and it is becoming increasingly difficult to justify selling at current levels. Next critical support doesn’t come in until the 2008 lows by 1.2330, but we would expect to see a corrective bounce from where a lower top is sought out ahead of an eventual bearish resumption.  A break back above 1.3000 will now be required to relieve downside pressures.
USD/JPY: The market has managed to break to fresh 2010 highs beyond 94.75, to confirm a fresh higher low by 91.60, and expose the next upside extension towards the 98.00 area over the coming sessions. The overall structure remains highly constructive, with the pair looking like it is in the process of carving out a major longer-term base. Look for any intraday setbacks to now be well supported in the 93.00 area, with a break above the elusive 95.00 barrier to accelerate.
GBP/USD: Key support by 1.5130 has been taken out, and the close below this level on Tuesday helps to reaffirm bearish outlook. From here, any rallies should be well capped by 1.5350, with a lower top sought out ahead of the next major downside extension to retest next key support by the 2010 lows at 1.4780 further down. Short-term levels to watch above and below come in by 1.5175 and 1.4975 respectively.
USD/CHF: The overall structure is highly constructive with the market accelerating gains following the break back above 1.0925. Additional upside is now projected into the 1.1500 area over the coming days, although we can not ignore daily studies which are now showing overbought. The risks from here are for some form of a pullback, but any inter-day setbacks should be well supported ahead of previous resistance now turned support by 1.0900.
FLOWS
Official bids reported in Eur/Chf ahead of 1.4200; heavy offers from a wide variety of account types.
TRADE OF THE DAY
No Trade: Things have been a little too volatile and we will take to the sidelines until a clearer opportunity presents.
PORTFOLIO OVERVIEW
P&L Update and Overview: Many of you have been asking for a way to better track trading results and open positions. In response to these requests and in an effort to be fully transparent, a simulated portfolio has been created to track our results on a daily basis. We are pleased to announce that our model generated returns of 50% in 2009. The return on equity curve seen below has now been reset for 2010. 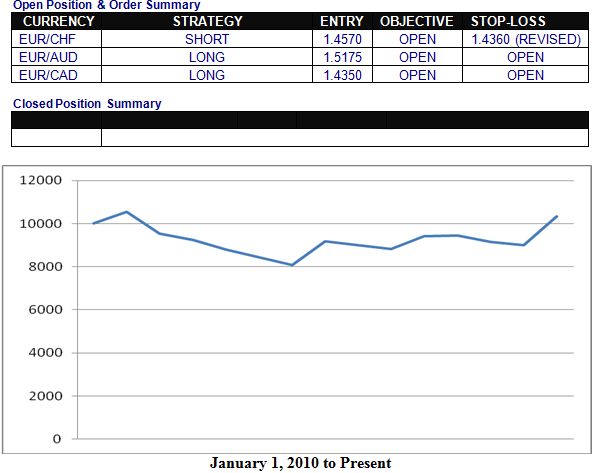