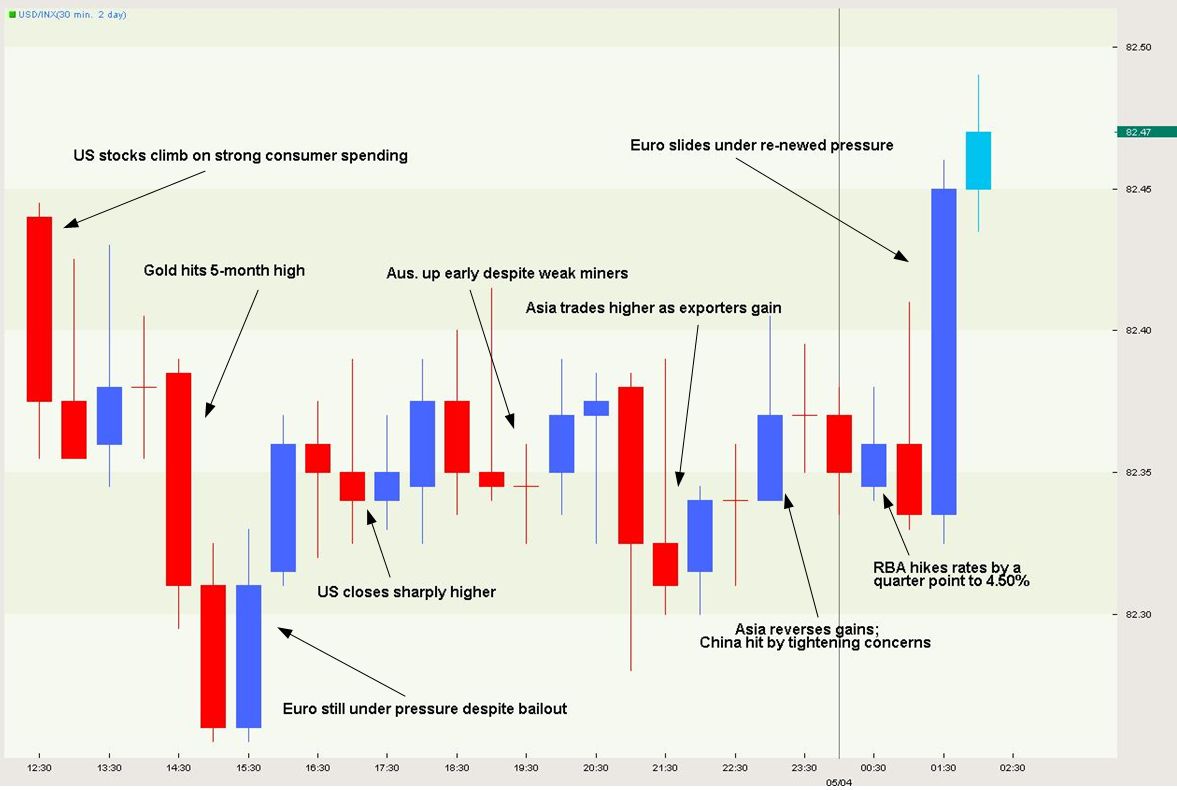 FUNDYS
Pimco’s El-Erian has not helped to bolster any confidence in the Euro, with the bond fund CEO warning that the latest package will not mark the end of the Greek debt crisis. The WSJ has also knocked the credibility of the latest rescue package after publishing an article that headlines that the Eur110B bailout funds will not be enough to cover Greece’s costs.  While Greece and Portugal have been grabbing most of the headlines, the focus has also shifted to Spain today, with a NY Times article suggesting that Spain is in an equally difficult situation. Some more bad press out from Germany’s Der Spiegel, warning of the risks to an EU bankruptcy given the levels of national debt have also not been seen helping matters. However, rumors of a potential Fitch downgrade of Spain’s AAA rating were put to rest after the rating agency came out to reaffirm the current ratings.
Relative Performance Versus USD on Tuesday (As of 11:25GMT) –

1) YEN         -0.01%
2) STERLING -0.31%
3) SWISSIE        -0.51%
4) EURO -0.52%
5) KIWI -0.56%
6) CAD        -0.62%
7) AUSSIE -0.91%
While it is unsurprising to see the latest bout of risk aversion weigh on currencies and equities, with the Euro taking out stops and breaking  to fresh 2010 lows below 1.3115, price action in gold has confounded, with the yellow metal managing to track in positive territory on the day. It seems as though the metal stands to benefit in whatever the environment. Healthy risk appetite translates into demand for commodities, while risk aversion promotes safe haven buying of gold. Oil price action on the other hand has been more consistent with correlated themes, as crude trades lower by nearly 2% on the day.
On the data front, UK manufacturing PMI came in stronger than expected, while other secondary data in the country was more or less as expected. Meanwhile in the Eurozone, PPI failed to influence price action, with the data also coming in within analyst estimates.
The key event risk for the day has come and gone in the form of the RBA interest rate decision. While the central bank indeed did hike rate by 25bps to 4.50% as was widely expected, the accompanying statement was not as well received by hawks, with the RBA suggesting that it will now look to pause after rates for most borrowers were now expected to be around average levels. The Australian Dollar has had a hard time trying to establish itself above 0.9300 against the buck, and given the latest balanced statement from the central bank, we could start to see some major profit taking in a market that has been aggressively bought over the past several months. Adding to the risks for some selling in the higher yielding antipodean are the ongoing fears over the contagion impact of the Eurozone debt crisis, and a Chinese economy which continues on its tightening path.
Elsewhere, price action in Usd/Jpy has been generating attention, with the Yen exposed potentially on two fronts. While the improvement in the global equity markets has opened some fresh Yen selling, it now appears that there may be another driver of the relative weakness in the single currency. A report from S&P suggesting that Japan “faces growing urgency to slash its deficit in order to stave off a sovereign ratings downgrade,” has been seen as the prime driver of the relative Yen weakness on Tuesday, with Usd/Jpy surging to fresh 2010 highs above 94.75. Japanese markets have been closed for Golden Week, and this has also helped to add to the volatility picture here. Key barriers by 95.00/95.50 are now expected to be taken out over the coming sessions.
Looking ahead, US Challenger job cuts are due at 11:30GMT, followed by ADP employment (30k expected) at 12:15GMT. US ISM non-manufacturing (56.0 expected) is due at 14:00GMT, with some oil inventory data capping things off at 14:30GMT.  On the official circuit, Fed Rosengren is slated to speak on the topic of housing in Boston at 12:30GMT. US equity futures are pointing to a lower open of some 0.50%, while commodities are mixed with oil sharply lower and gold mildly bid.
GRAPHIC REWIND

TECHS
EUR/USD: Continues to extend declines to fresh 2010 lows, now into the upper 1.3000’s thus far, with the market eyeing a retest of next key psychological barriers by 1.3000 over the coming sessions.  While 1.3000 offers itself as some formidable psychological support, 1.2885 represents the low from April 2009, so we look for a test of the 1.2885-1.3000 area over the coming days. Also coming in by 1.3000 is a key 78.6% fib retrace off of the major 2008-2009 move. Look for any inter-day rallies to now be well capped ahead of 1.3400, while ultimately, only a break back above 1.3815 gives reason for pause. Monday’s bearish outside day price action helps to reaffirm negative outlook.
USD/JPY: The market has managed to break to fresh 2010 highs beyond 94.75, to confirm a fresh higher low by 91.60, and expose the next upside extension towards the 98.00 area over the coming sessions. The overall structure remains highly constructive, with the pair looking like it is in the process of carving out a major longer-term base. Look for any intraday setbacks to now be well supported in the 93.00 area.
GBP/USD: Rallies have stalled out with the market failing to break back above the 1.5500 range highs and rolling back over in favor of a bearish continuation.  Initial support by 1.5190 has been taken out and next key support comes in by 1.5130. Look for a close below 1.5130 to accelerate declines and potentially warn of a retest of the 2010 lows by 1.4780 over the coming days. Any intraday rallies are expected to be well capped ahead of 1.5400.
USD/CHF: The overall structure is constructive with a medium-term higher low now sought out by 1.0435 in favor of the next major upside extension beyond 1.0925 and towards 1.1500 further up. Ultimately, it is the 200-Day SMA that we use as our gauge for direction, with the longer-term SMA, which comes in just under 1.0500, expected to continue to prop setbacks on a close basis. So long as the market holds above this SMA on a close basis, we recommend looking for opportunities to be long. Short-term support now comes in by 1.0700. It is also worth noting that the 100-Day SMA has recently crossed up above the 200-Day SMA for the first time since September 2008, which is another bullish signal.
FLOWS
Option barriers at 1.3100 in Eur/Usd; Asian central bank bids; Funds, macro accounts and a Swiss name have been heavy sellers. Pension fund on the offer in Gbp/Usd; technical accounts citing eyeing a break of 1.5130. Model funds buying Usd/Jpy. UK clearer demand for Eur/Gbp. Local accounts on the bid in Usd/Cad. Leveraged names selling Aud/Usd and Aud/Nzd.
TRADE OF THE DAY
No Trade: No new set-ups just yet although we are keeping a close eye on an Aud/Nzd cross which could be looking for a bottom soon.