A Clever Scalp Set-up in EUR/GBP

With the markets surprisingly short on set-ups recently, traders might be able to respond to the recent drop in GBPUSD by trading EURGBP instead. At the time of writing, EURGBP has already put in a daily range of 38 pips, which is approximately the average size of a daily bar for the pair. This suggests potential for short positions that go in the direction of the prevailing trend in EURGBP.

The four-hour chart below shows a potential turning point, with price approaching a declining line of resistance that has been drawn using more data than is visible on the chart. Although there is one previous and notable breach of this line, price quickly reversed, which lends credibility to the idea that the game is not over as far as sellers near these levels are concerned.

When choosing a possible resistance zone for initiating new shorts, however, it’s important to carefully consider the strong upward momentum on the below hourly chart. Thus, even though the daily average true range (ATR) has been reached, it is preferable to allow for a little more leeway. 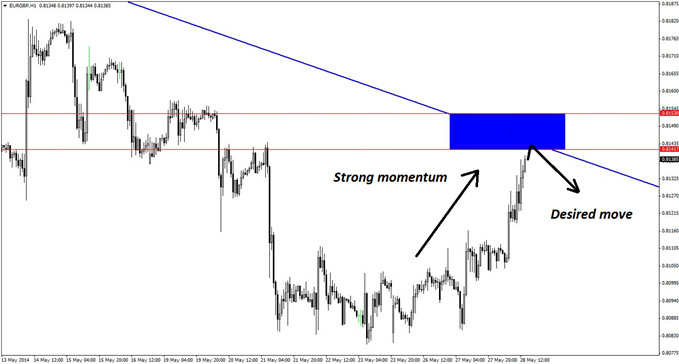 In all, the resistance zone selected is 0.8141-0.8153, which is a mere 12 pips deep. When compared to the 60 pips of potential downside required to challenge the lows, proper risk considerations are more than satisfied.

The below 15-minute chart of EURGBP lends credence to the idea that a short set-up may be in the offing, as price has recently exceeded the top of a wedge pattern. Should price touch the resistance area and then reverse back into the wedge pattern, it would signal a perfectly valid entry opportunity for pattern traders. 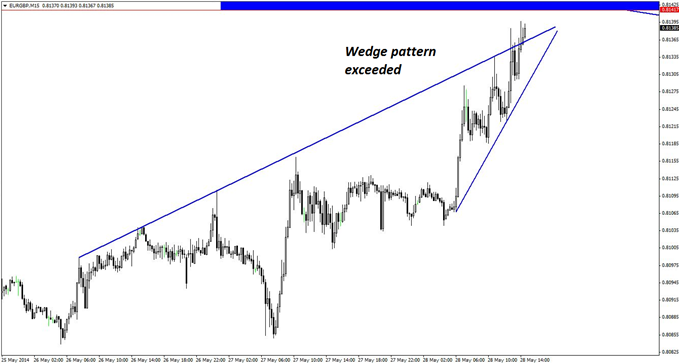 For those who are more inclined to stick with traditional entry triggers, however, bearish reversal divergence as price touches the resistance zone would also be valid, as would bearish engulfing patterns and/or pin bars on the 15-minute time frame.

There is one strike against this trade, however: the Elliott wave count on the 15-minute chart seems to suggest that the current move is in fact a third wave that could produce one more spike up. Those wary of this factor could opt to wait for a fourth wave to appear before shorting the fifth wave instead.

However, traders may also believe, as I do, that the confluence of factors is good enough to justify taking two or three tries at this trade in hopes of entering in the direction of the trend on the higher time frames.