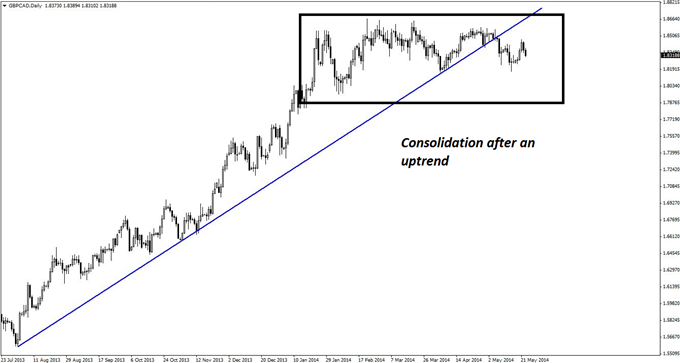 A "Hidden" Long Opportunity in GBP/CAD

After the past few months, there is no doubt that GBPCAD is in consolidation on the daily chart (see below). In situations like this, it is always best to assume that the trend will eventually continue, although there is no telling when. Hence, the best response is to keep taking long positions at logical and legitimate areas of support.

Based on trend line analysis, it may look as though price has broken a rising line of support. However, there has been no convincing retest of the trend line, which leads to the expectation that one may be developing in the near future. Thus, the four-hour chart is used in order to identify favorable entry points. 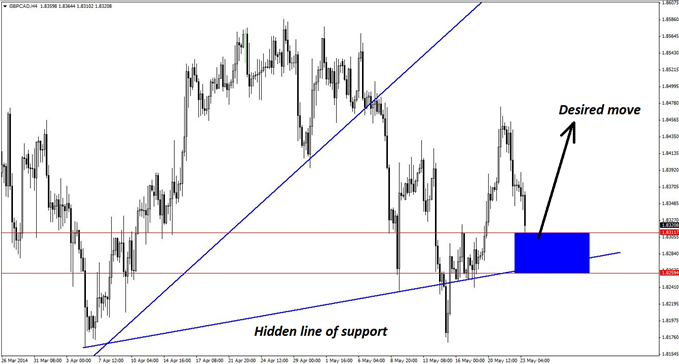 The four-hour chart displays a “hidden” line of support that is masked because of the recent downwards spike, which ultimately was a false break of this support line. Considering price bounced up rigorously from this level before, it is reasonable to assume that it could do so again. This is especially convincing because GBPCAD made a higher high before the current decline on this time frame.

Thus, the estimated support zone is 1.8259-1.8311. This is 52 pips deep, which is very reasonable considering that there would be 270 pips to reach the recent high, and such a move would be possible if the underside of the longer-term trend line is tested.

The hourly chart below shows a somewhat suspicious Elliott wave count. The initial moves up seem to fit a 1-2-3 pattern quite well. However, the current pullback on wave 4 has broken the high of wave 1, which is usually prohibited in a trending market. 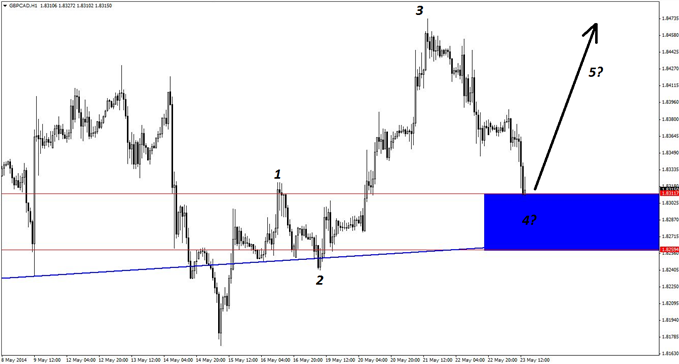 That said, this is not a trending market, and as such, it is not unusual to see some marginal breakage of rules. Thus, the zone of support indicated actually has the support from wave 1 in its favor as well.

In all, long entries in GBPCAD should be taken on bullish reversal divergence, bullish engulfing patterns, and/or pin bars on the hourly time frame. And, as always, two or three attempts can be made to get in on the trade.