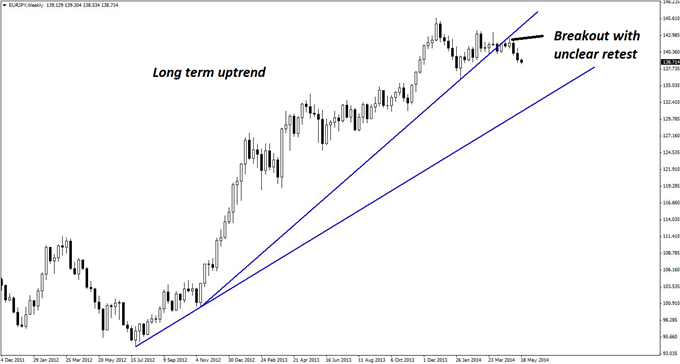 EURJPY is currently in a situation that might seem confusing to some traders. To make some sense of it, though, it is necessary to start by observing the weekly chart, shown below.

The weekly momentum is clearly up, but the picture is somewhat confused by the fact that price has recently broken and retested a rising line of support. In theory, this should mean that price will travel downwards to test the longer-term trend-line support.

However, the retest in this case was somewhat unclear, and this gives traders reason to suspect that a second retest of the previous support (now resistance) may be on the way. Should this occur, a long trade could contain as much as 500-600 pips, which could certainly make this trade worth a try. 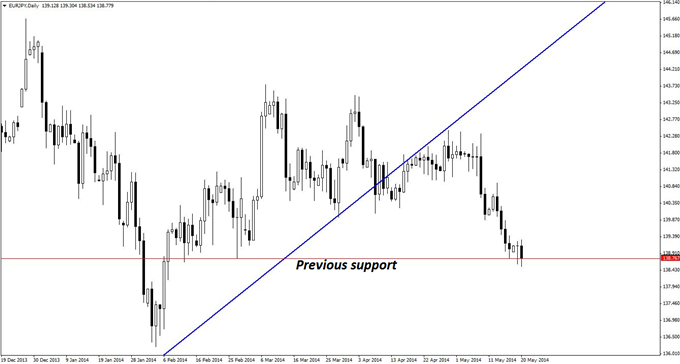 The four-hour chart below provides some further evidence of price slowing down, as suggested by the curved nature of the trend. Although still technically a downtrend, it is showing many signs that a larger move up may begin soon. The recently completed pin bar and break of a previous high are especially noteworthy. 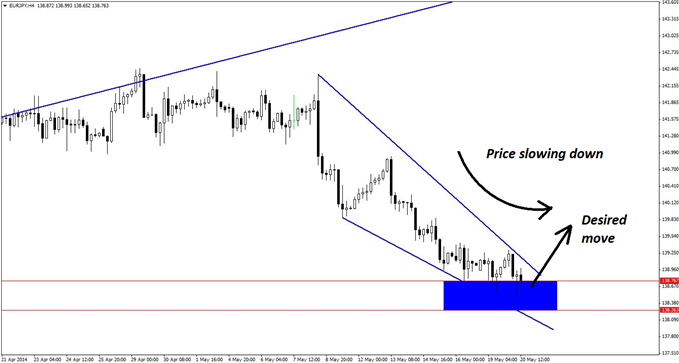 As such, this trade already has a legitimate entry trigger. Even better, price has pulled back a little, which means that new long positions can be taken on very little risk.

The estimated zone of support is 138.26-138.76, which is a mere 50 pips at the most. An entry at/close to 138.76 is suggested, and the stop loss can be placed below the low. This will give an overall risk profile of less than 30 pips, which is perfectly acceptable.

Price may still swipe the low one more time, resulting in a stop out. However, traders should be on high alert and try at least twice to get in on this move by watching the four-hour chart for further signs of an upside reversal. This would include pin bars, bullish engulfing patterns, and/or bullish reversal divergence.