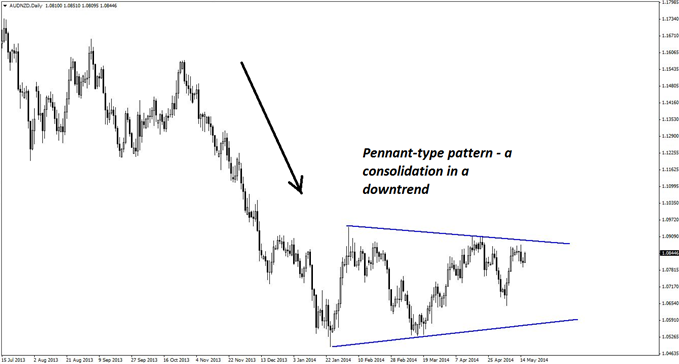 An All-too-Rare Trend Trade in AUD/NZD

Even though markets continue to move in spurts, there are still opportunities to be had. Over the past week, market alignment has shown signs of shifting, and hopefully, this will mark the dawn of a more benevolent period.

Especially of late, many have commented on the lack of FX volatility, but more interesting is that what is traditionally the most fruitful half of the year has flown by in 2014 with relatively scant pickings. June is typically a low-volatility month as well, and thus, it will be interesting to see if it reverses character and brings some nice trends into play instead.

Currently, the pennant on the below daily chart of AUDNZD is interesting mainly because the preferred breakout direction of this trade is down. And, should it turn downwards at this point near the top of the pennant formation, the risk profile for new shorts should be excellent, as a move to the rising support line would contain 260 pips or more.

Meanwhile, the four-hour chart below shows price already beginning to flirt with a declining line of resistance that was not clearly visible on the daily chart. Nearby highs and lows readily provide guidance as to a reasonable zone for interacting with price, thus producing an estimated resistance area of 1.0850-1.0878. 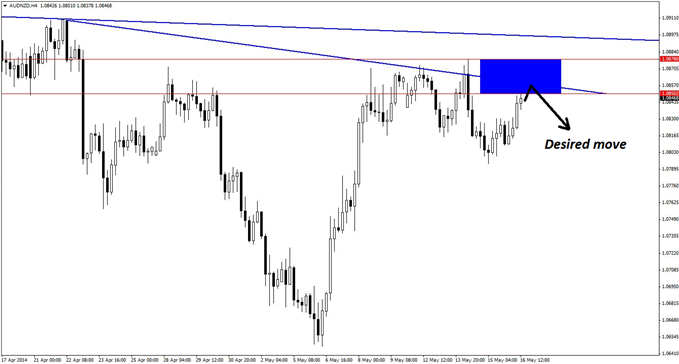 The hourly chart, however, provides a reason to be cautious. The recent rally into the resistance zone consisted of six consecutive bullish candlesticks. Although price is currently showing some signs of reaction, it is still relatively soon to be making any decisions. 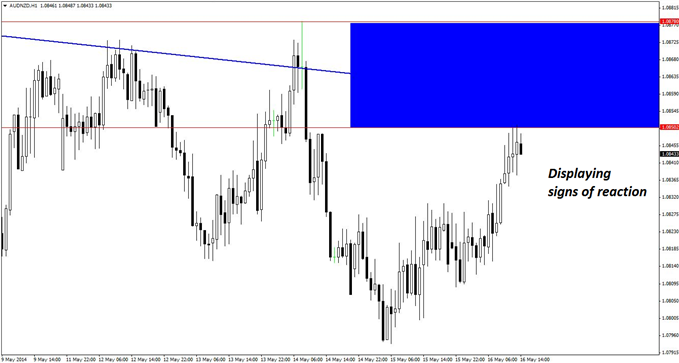 Moreover, more active traders may even prefer to enter on the 15-minute chart (not shown), where a clear M-type formation denoting a top might be an even better entry.

For those who prefer the hourly chart, however, it would be wiser to wait for a bearish black candle to form, effectively signalling the re-entry of sellers into the fray. Then, let patience prevail and allow the bulls one last gasp to the topside before going in short using bearish reversal divergence, pin bars, and/or bearish engulfing patterns as entry signals.

This may play out quickly, with a bearish candle immediately followed by a bullish one, and then another bearish one. Alternatively, it may play out over several candles and not actually trigger until next week.

Nonetheless, the formation of this trade is one of the most attractive in recent memory, and as a result, it’s worth two or three attempts at the entry. Afterall, the risk zone is a mere 28 pips deep.