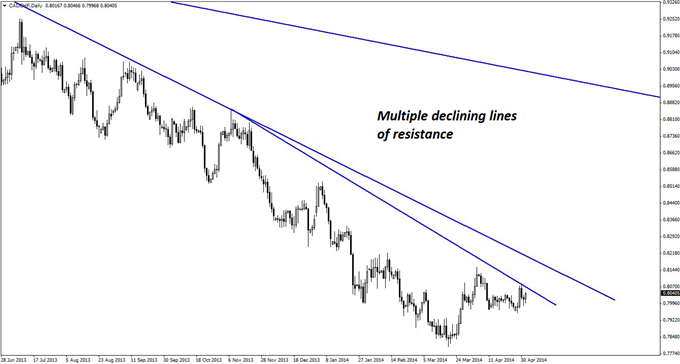 A CAD/CHF Short That Could Trigger Very Soon

CADCHF has been in a very lengthy long-term downtrend, as both the weekly and daily charts would demonstrate. The pair is currently consolidating sideways on the lower time frames, but the clear bias for any trade should certainly favor the short side.

On the below daily chart, there are multiple declining lines of resistance. In fact, price action has been so regular that this pattern can be contained within a parallel descending channel (not drawn).

The four-hour chart below shows a confluence of resistance close to the current price. Although it is somewhat difficult to characterize this particular price action using trend lines, a trader with a little imagination would be able to see that the downtrend began a larger downward cycle beginning at the left side of the chart.

Ultimately, CADCHF bottomed out and retraced towards the trend line, stopping just short of touching it before finding resistance. This current excursion to the upside could well be the last breath of a retest before the bigger-picture sellers come in and begin another downward cycle. 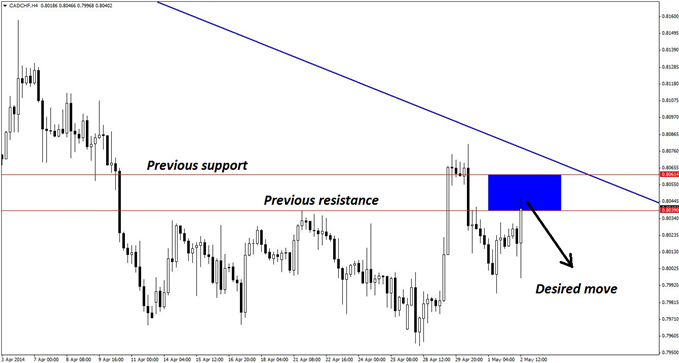 The key zone of resistance for CADCHF is 0.8039-0.8061, an area merely 22 pips deep. When compared to the 80 pips or more of potential downside movement if price should successfully decline to test the lows, even traders who are picky about risk profile should be satisfied.

The hourly chart below already shows a pin bar, which is one of three possible short-entry triggers for this trade. The other two, as usual, would be bearish engulfing patterns and/or bearish reversal divergence. 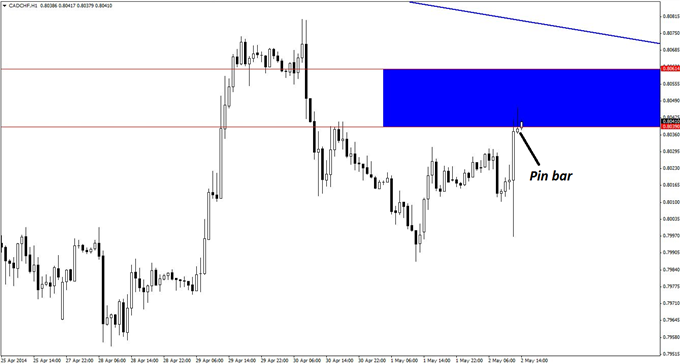 A break of the low of the pin bar would signal a reasonable first attempt to hop on to this move, although if price fails and rises higher thereafter, a second or perhaps even a third attempt would be in order. Afterall, it is worth trying at least twice to get on to trades such as this.

On the other hand, traders should bear in mind that the FX crosses (and indeed, many of the major pairs) have been choppy for this style of trading for most of April. Hopefully, May will usher in more cooperative trading conditions, and there are already signs that the market is shifting once again, as the interaction of price with expected turning zones has begun to change.