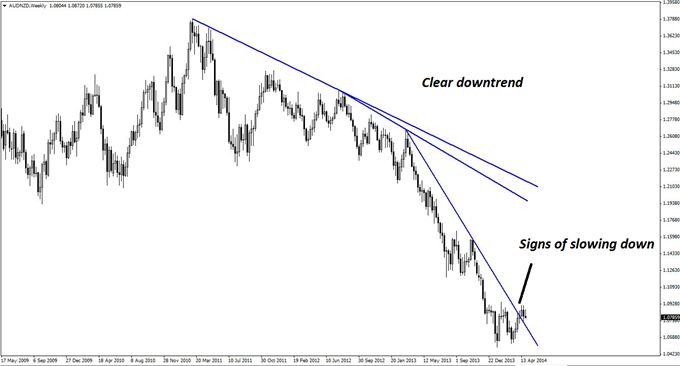 A Clear Bear Flag in AUD/NZD That Probably Won't Work

As the market appears to be finally transitioning out of a relatively difficult cycle from the past month of trading, patterns are also undergoing a period of readjustment. Often, during times like these, certain novel situations can arise, and today's set-up in AUDNZD comes as a classic example of that.

Although the idea of a 1000-pip move is a distinctly juicy proposition, it is best to simply focus on smaller trades. Should price indeed rise that far, traders will be able to ride that move as a matter of course.

The bullish bias is somewhat contradicted by the below daily chart, however, which shows a brief recent uptrend has been broken and a lower high formed within the last few days of trading. 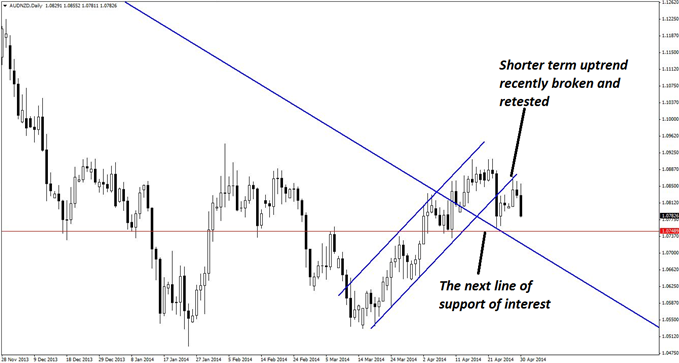 Classical chart pattern analysis would classify the above pattern as a bearish flag, and a break of this pattern (which has occurred) would be a bearish signal. And normally, this would be true. However, the daily chart also reveals a hidden horizontal line of support (at 1.0748) that could potentially wreck this pattern.

As a result of the hidden support line, price has to conclusively break this level to re-create firm bearishness. Thus, there is a distinct opportunity for nimble longs at this juncture.

The four-hour chart below offers lots of confluence support, all coinciding within the shaded blue box. There are horizontal support levels, the hidden support line from the daily chart, and the declining daily trend line all contained in this area.

In combination, these provide a support zone of 1.0744-1.0771. This zone is 27 pips deep, which is a very small risk zone for a trade that has literally 1,000 pips or more to move under the most optimistic scenario. 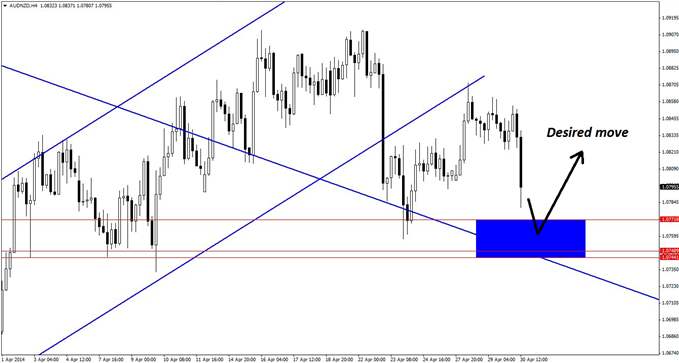 The challenge, of course, is the downward momentum currently being exhibited by price.

Classical Elliott wave analysts will likely have some bones to pick about the wave count marked on the below hourly chart. However, it is quite likely that price, having already made a momentum move, may pull back a little before making a final charge lower into the shaded blue support zone. 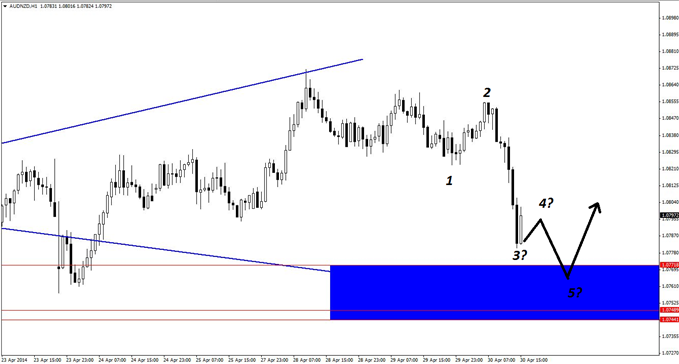 The trade would actually be less tempting if price simply charged straight in. Nonetheless, it is possible to take a long from this zone using pin bars, bullish reversal divergence, and/or bullish engulfing patterns on this hourly time frame.

As always, two or three attempts may be required, and traders can consider using reduced risk in order to account for the threatening momentum, particularly if wave 3 does charge straight into the support zone without a pullback.