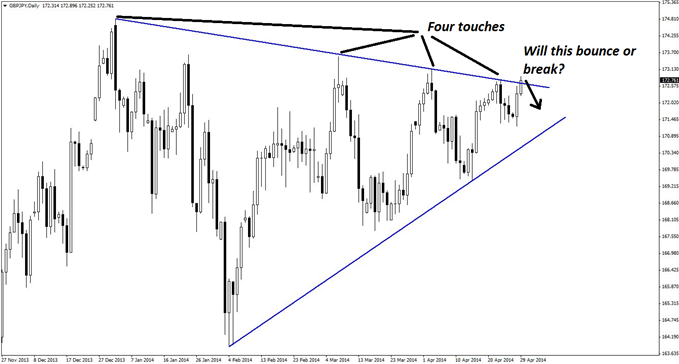 A Rare Range Trade in the Ever-Volatile GBP/JPY

GBPJPY is known especially for its volatility, yet for most of this year, the pair has been consolidating in a triangle pattern, and today, price is heading higher as part of that triangle pattern and testing a very well-defined declining line of resistance on the daily chart.

This line of resistance is particularly powerful, as it is the site of four very clear prior touches. This is exceedingly rare in the forex world, and as this is the first break beyond this line, it is reasonable to suspect there will be sellers moving in on the assumption that the consolidation will continue.

Whether the consolidation will materialize, of course, is anyone's guess, but the most appealing trade at this point is certainly on the short side. A move to the bottom of the triangle could contain nearly 200 pips, if not more. However, one key risk is that the weekly trend (not shown) is still up. Nonetheless, with such a well-defined pattern, it is worth at least attempting a short while also understanding that doing so carries slightly-higher-than-normal risk.

The triangle pattern makes it somewhat trickier to estimate a zone of resistance, but there are two clues:

As shown, the final resistance zone emerges as 172.87-173.38. This zone is 51 pips deep, which still makes for attractive overall risk profile. 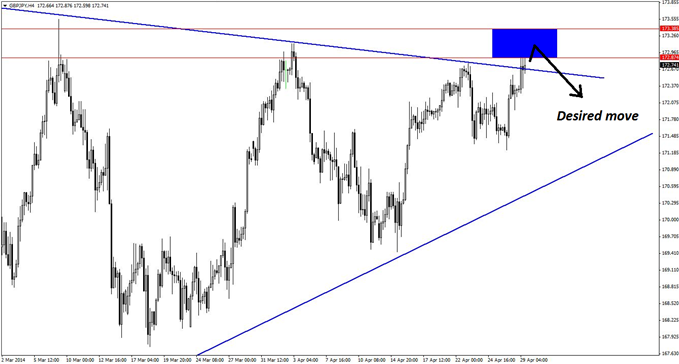 The hourly chart below gives reason for pause, however, as it is exhibiting a relatively steep climb into the zone of resistance. In fact, it has already once interacted with it, giving a bearish engulfing candlestick that failed to turn the trend lower. 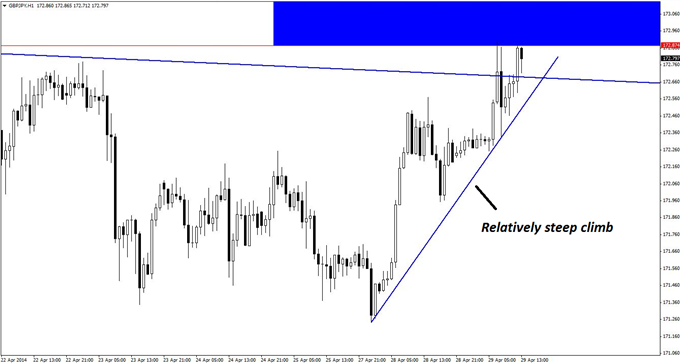 Nonetheless, that bearish engulfing pattern sufficiently suggests the presence of sellers, even if they are not yet in control. However, this taken alongside the fact that the weekly chart is in an uptrend must be considered carefully when looking to short GBPJPY. As a result, it is best to wait for price to make a new high before trading any new reversal triggers, which would include bearish reversal divergence, pin bars, and/or bearish engulfing patterns on the hourly time frame.

This being the infamous GBPJPY, it may certainly take two or even three attempts to hop on this trade, which would work well should the pair turn swiftly downward.