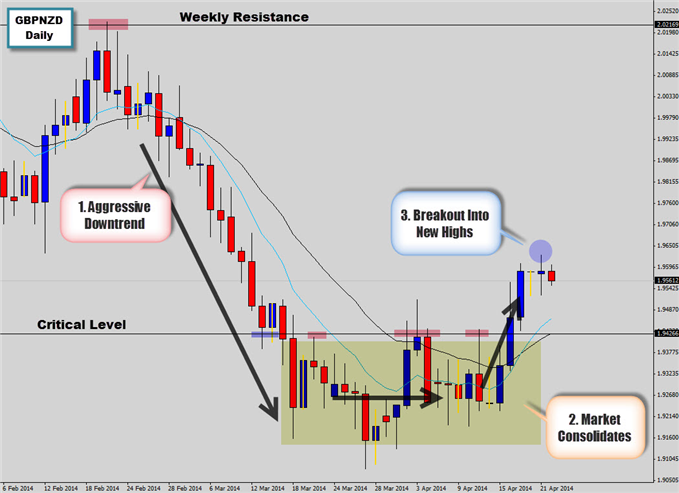 A Nearby "Hot Spot" for GBP/NZD Longs

Today, we look to the daily chart of GBPNZD, where a bullish technical event has now shifted the dynamics on the chart to favor further upside price movement. The pattern on the below chart should be especially interesting for swing traders who like to catch medium- and longer-term market movements.

One simple yet powerful thing to keep in mind about support and resistance is that the dominant levels on the weekly time frame generally act as major turning points in the market. As shown, GBPNZD tested a major weekly resistance level in February 2014, and it’s no surprise that the market sold off aggressively from this point and began a full-blown downtrend from there.

The downtrend lasted for several weeks, with nearly every daily candle closing much lower than the day’s opening price. These “straight-line” trends can be very potent and produce explosive price movements. However, we all know the market doesn’t move in a straight line forever.

After the strong downtrend momentum died off, GBPNZD fell into a consolidation phase, grinding sideways for a little over a month. A general rule of thumb for such consolidation patterns is that the longer the consolidation, the more potent the ensuing breakout. And, consistent with that rule of thumb, during last week’s trading, bullish momentum in GBPNZD built up to a critical level and we finally saw an initial breakout.

As shown, GBPNZD breached the key resistance level that had been containing price for the month prior. This bullish rally ultimately continued and resulted in the formation of new recent highs.

Essentially, the dynamics have now gone from bearish to bullish for GBPNZD, and technical signals are aligned and suggesting further upside movement ahead. Some of the key points that currently give a bullish bias include:

How to Trade a New GBP/NZD Uptrend

In all, we’re looking for the potential formation of a sustained bullish trend in GBPNZD, and are waiting for the market to weaken and correct back downwards to re-test the previous resistance (now support) level. If this market has any chance of developing a clean new uptrend, this horizontal level will need to hold as support. 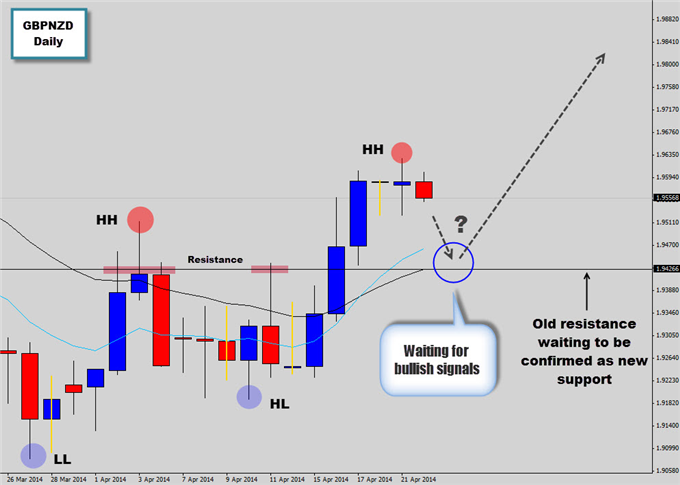 The area we’re targeting for possible long-entry positions also coincides with the mean value (10 and 20 EMA), which behaves as dynamic support during bullish trends.

The synchronicity of these uncorrelated variables creates a nice “hot spot” where bullish reversal set-ups may develop. Traders should wait for bullish candlestick reversal patterns including pin bars, engulfing candles, outside candles, or even proprietary, system-generated buy signals before initiating new long positions.

When we switch over and look at price action on the weekly chart of GBPNZD, it’s easier to see the “bigger picture” and discern longer-term market direction. As shown below, the weekly chart suggests the pair is looking to retest the major weekly resistance level around the 2.0200 level, as range-bound conditions continue to prevail on the weekly time frame. 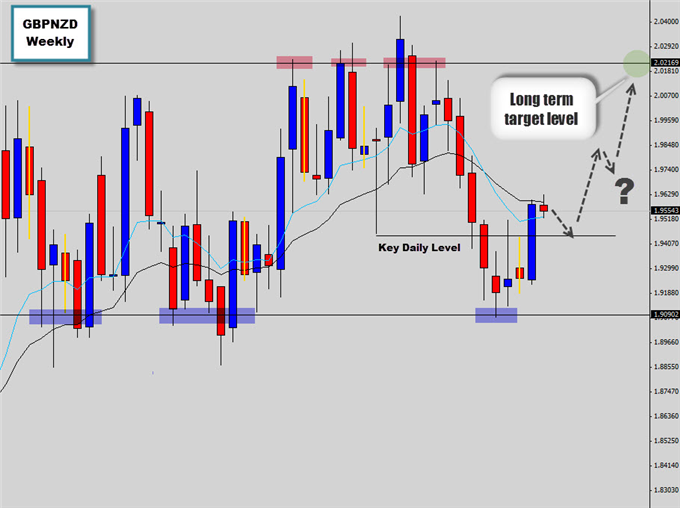 By Graham Blackmore of TheForexGuy.com