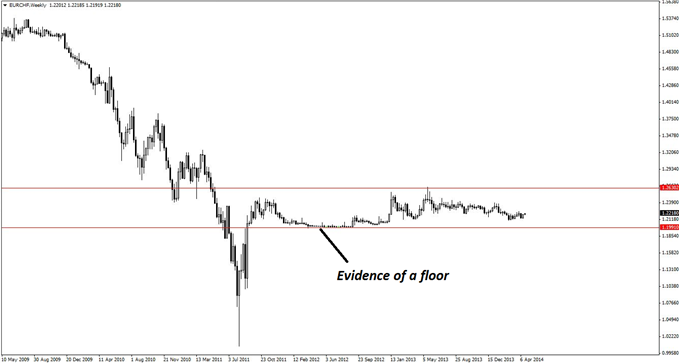 New or less-experienced traders tend to ask a rather common question of their trading coaches and consultants: "Have market conditions been good or bad for trading lately?"

This usually proves to be a tricky question, and the answer will ultimately be different depending on each trader’s style and especially the time frame(s) they trade. As an experiment, I polled three veteran clients about their performance over the past two months. As it turned out, two of them have had a wonderful time, while the third had very little to show for his troubles for most of that period.

Their strategies are all identical, so what's the difference? Well, the first two specialize in trading off of the four-hour time frame, while the third trades hourly and 15-minute charts.

Now, this in no way means that the four-hour charts are better for all traders. As a rule of thumb, the higher time frames are more stable, however, that does not mean they are more profitable. In the long run, the profitability of all three traders is about the same, but different time frames become more profitable as market conditions cycle from one phase to another.

Interestingly enough, the situation with those same three traders was completely reversed a few months back when the first two were merely treading water while the third was making money!

There’s really no way to tell which time frame is going to be profitable and when. Furthermore, most traders have to work around their day job, so their “chosen” time frame is often decided for them. As a result, what matters most is to know a strategy from top to bottom, which includes understanding how that strategy draws down. This makes is possible to continue taking trades even in adverse market conditions.

While full-time traders can often juggle trades through multiple time frames, for most traders, that is not practical or even possible.

Shifting over to current conditions, in a market that has been somewhat scatty, EURCHF seems to be offering an interesting set-up.

More experienced traders know that there is a strong longer-term floor for this pair that has been defended by way of central bank currency intervention. This is clearly visible on the below weekly chart, making 1.1991 (or 1.2000 for those who like round numbers) a buy area. However, price is currently more than 200 pips away from this zone, and in spite of the limited downside, a short trade looks surprisingly attractive.

The daily chart below shows a classic pullback to resistance, which is an excellent reason to be considering new short positions. Even though the downside is only 200 pips or so, this pair is notoriously slow moving, so it is extremely likely that lower time frames will provide risk-controlled entry opportunities. 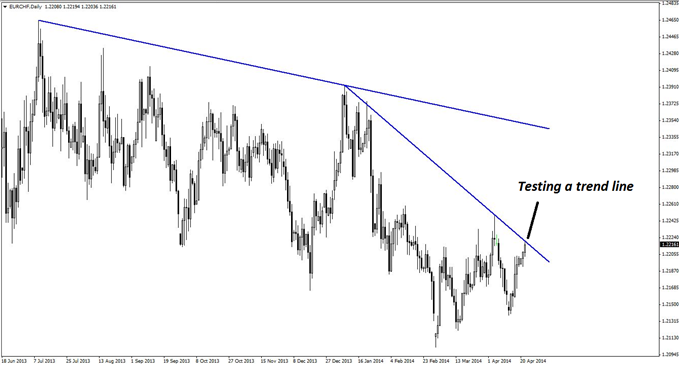 The four-hour chart below readily offers a clear zone of resistance coinciding with the declining trend line, which providing an estimated resistance zone of 1.2216-1.2233. As expected, this blue box is a mere 17 pips deep, which certainly makes the 200 pips of potential movement look extremely worthwhile. 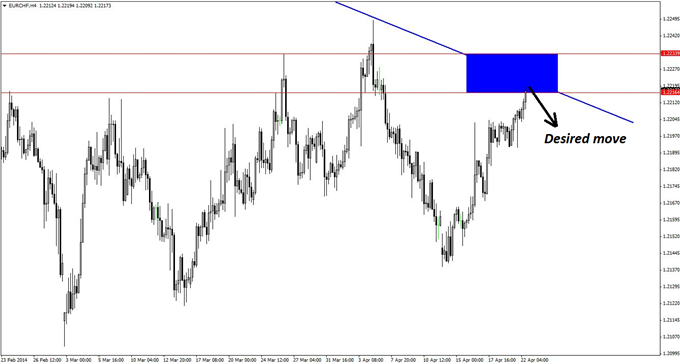 The hourly chart below offers an even more encouraging signal, as it shows the potential end of a five-wave Elliott pattern right into the resistance area. If the indicated wave count is correct, then a two-legged a-b-c correction is to be expected. 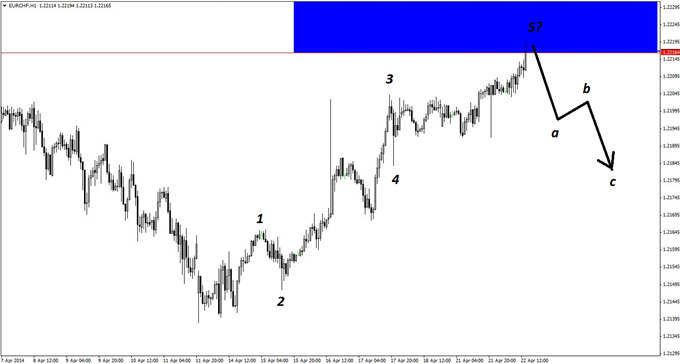 This trade could be taken on extremely small risk using bearish reversal divergence, bearish engulfing patterns, and/or pin bars on the desired time frame. The only caveat is that EURCHF is notoriously skittish, and thus, the usual warning that it may take two or three attempts to successfully hop on to this move applies more than ever. However, for a typically slow-moving pair like this, a sudden spike in the right direction could just as easily help the entry pan out surprisingly quickly.