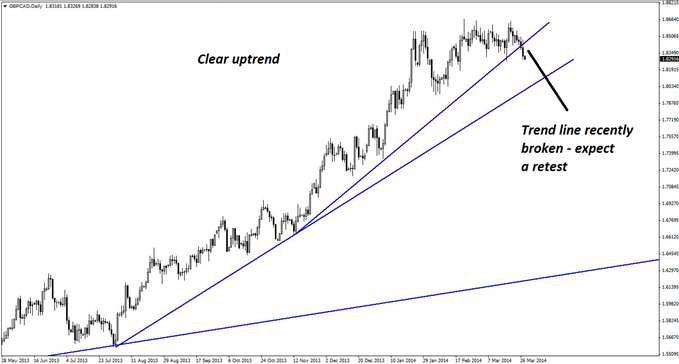 GBPCAD is currently demonstrating a rather unusual situation: a sideways range that is relatively even and textbook in nature. In spite of how often texts about technical analysis show this sort of perfectly ranging market, they are, in practice, quite rare.

In fact, even this situation is not perfect, as will be demonstrated later on the four-hour chart. However, the set-up happens to be in the direction of the daily trend, and as a result, it certainly comes as a viable trading opportunity.

As seen on the daily chart below, a rising trend line has been broken recently, and as with all countertrend breakouts, and especially one that has been intact for so long, it is wise to assume that it is false. And, if so, traders may be able to buy GBPCAD at an advantageous price level and capitalize on a resumption of the prevailing uptrend.

Even if price only went up to retest the underside of the previous trend line support, there would be more than 150 pips to be had in that move. Needless to say, if price continues higher and the uptrend resumes, the proposition becomes increasingly attractive.

The sideways motion mentioned earlier can be seen to the right on the daily chart above, and one interpretation of that would be a sideways consolidation pattern. However, the four-hour chart below offers a more precise perspective.

This level of magnification shows that the consolidation is actually edging slowly down in a mostly consistent parallel channel. Price is now near support, as estimated from the declining line of support, as well as the double-bottom territory with which GBPCAD is currently flirting. The final support zone has been marked out as 1.8216-1.8295. 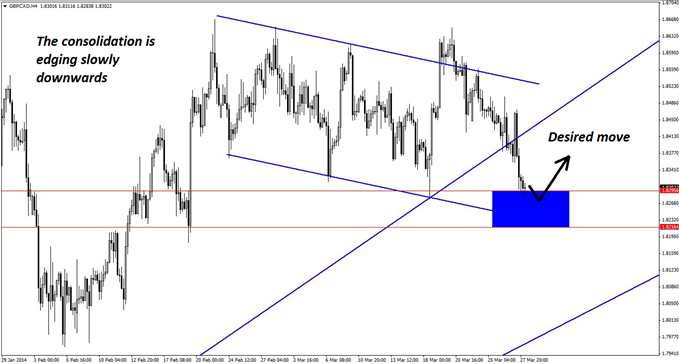 It is perhaps notable that if this had truly been a sideways consolidation, price would now be in a zone of particular interest to many professional traders. A false breakout to the downside followed by a quick reversal would leave many breakout sellers caught, and if all went according to plan, the panicked liquidation of short positions at that juncture could lead to a swift rise in GBBCAD.

Of course, the market does what the market wants, but this trade has that type of reversal potential nonetheless.

There is also a parallel channel on the hourly chart below, which lends further credence to the idea that support may be imminent. The best triggers for this trade would be bullish engulfing patterns, bullish reversal divergence, and/or pin bars on this hourly time frame. 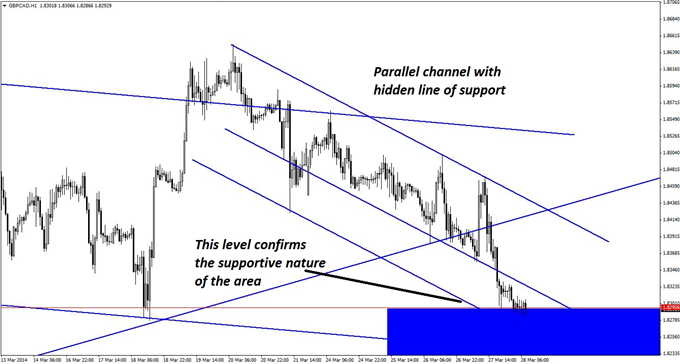 This move is currently showing some choppy action as evidenced by the last few candlesticks, but the good news is that most traders would have missed this anyway, and thus, the interaction will begin after price has had a chance to make up its mind. Nonetheless, the usual two or three attempts to get in on a potential bullish move up should be anticipated and prepared for.