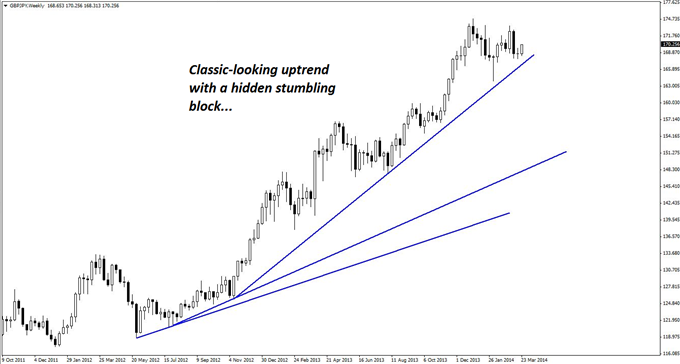 A GBP/JPY Set-up That Literally Requires a Second Look

Occasionally, some patterns will arise that will fool traders because they fail to examine the trade from multiple perspectives. Today's set-up in GBPJPY may well be one of those cases.

The weekly chart below reveals an innocent-looking uptrend that would cause many traders to want to ride the continuation pattern up.

However, a stumbling block occurs on the below daily chart. Pure chart pattern readers will readily see the triangle that is forming, and this would be considered an opportunity to ride it up to test the highs. While this view is certainly valid, there is an alternative interpretation to the following scenario. 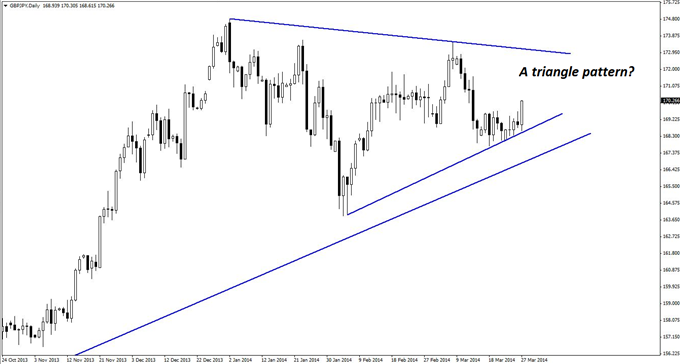 Alternatively, Elliott wave theory suggests that there are typically five waves in any triangle pattern. Each wave is comprised of two legs in the direction of the overall wave, as shown below. 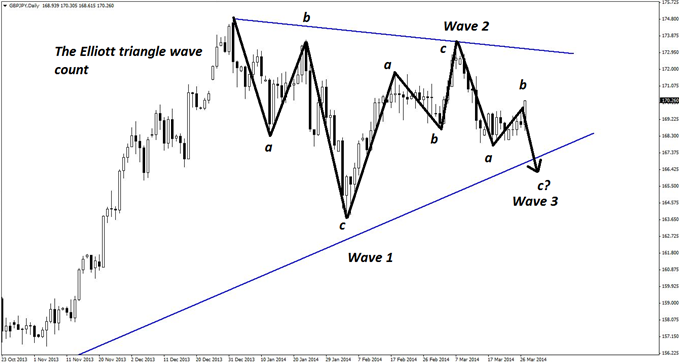 As seen, Elliott wave theory readily suggests that the move down is not yet complete, and these conflicting scenarios on the daily chart of GBPJPY cast doubt over the pair’s prevailing direction. However, practical traders will see a justifiable opportunity to take a short trade at what might be the “b” high of wave three.

In order to obtain a better entry, however, the four-hour chart below has to be considered. Here, resistance is easily obtainable using previous price action. If price can break past the zone of resistance indicated, then chances are good that the first scenario (i.e. price will continue heading up) will turn out correct. 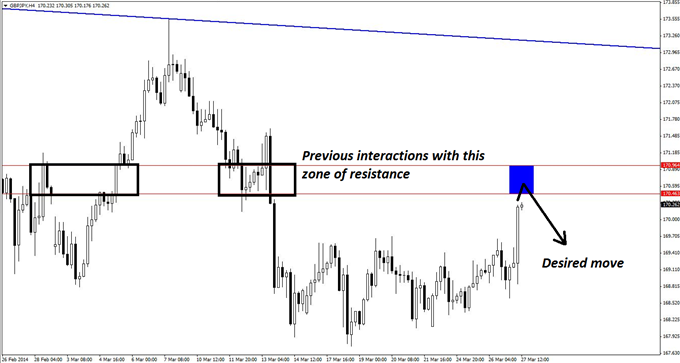 Ultimately, it is up to the market to decide, but this is a valid trade nonetheless. The only factor going significantly against it thus far is the fact that it is fighting a larger uptrend on the higher time frames. Still, even a move down towards the rising line of support on the daily chart would produce a move in excess of 300 pips.

As seen on the four-hour chart, the exact resistance zone has been estimated as 170.46-170.96. This represents a risk zone of only 50 pips, which makes the overall risk profile more than adequate for this trade.

The entry should be taken on the hourly chart (not shown), and viable triggers would be the usual suspects, which include bearish engulfing patterns, pin bars, and/or bearish reversal divergence.

As always, two or three attempts may be required to effectively hop on to this move, but no more than that, as this is a countertrend move, afterall.