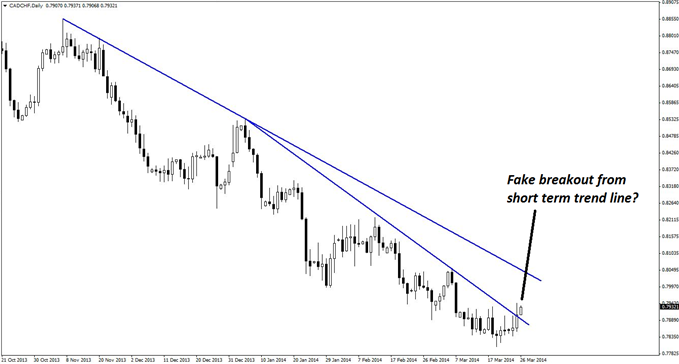 A "Classic" CAD/CHF Set-up with a Modern Trigger

Markets will periodically cycle through phases of extreme profitability liberally interspersed with times of prevailing inaction. The latter condition appears to be ruling today.

At the time of writing near the London open, only one trade of interest is occurring in the FX cross pairs, and that in itself sends up a warning signal. Although this CADCHF set-up is, in a sense, a “textbook” trade opportunity, it is worth using some caution, as the broader market is still uncertain.

The daily chart of CADCHF below has begun a familiar interaction with a pair of declining lines of resistance and has already broken out above the first of the two. As always, it is far wiser to assume that the initial break is a false one and that the prevailing trend will continue, at least until the line of resistance-turned-support has been retested and prices show further signs of turning around.

It was relatively easy to derive a zone of resistance for the pair using the four-hour chart below, and as shown, price has already begun to interact with that zone. The desired move is marked on the chart, and assuming the daily downtrend resumes, a retest of the low would give this trade at least 120 pips of potential movement, if not more. 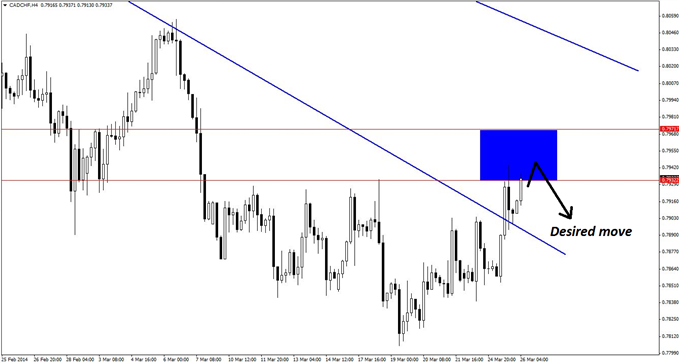 The zone in question is 0.7932-0.7971, which represents 39 pips of risk. Although that is not outstanding in terms of overall risk profile, it is acceptable nonetheless, especially when considering the broader market environment.

The trigger is to be taken on the hourly chart below, although this set-up may require an alternative method for recognizing bearish reversal divergence.

Many experienced traders are most likely versed in the traditional method, where price has to make a higher high before turning around. However, divergence can also occur on a closing basis, and as long as the current high closes above the previous one, and the oscillator makes a lower high, that is an acceptable signal, too. 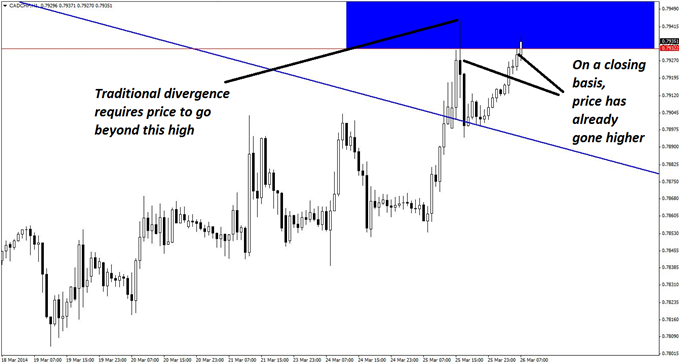 There are select reasons why this method is actually even more valid than the traditional one, the first one being that practically all common oscillators take into account the closing price for their calculation, not the highs or lows. Thus, it is more accurate to compare closing highs to oscillator highs.

In practice, there is only an occasional discrepancy between the two methods, but today's trade may well develop into one of those exceptions. Notice also that the pin bar on the previous high was exceptionally long-tailed.

Of course, the trigger may also come by way of a pin bar or bearish engulfing pattern on the hourly chart. As usual, two or three tries may be required to gain entry in this trade, but given the general market environment, it would be ill-advised to try more than twice.