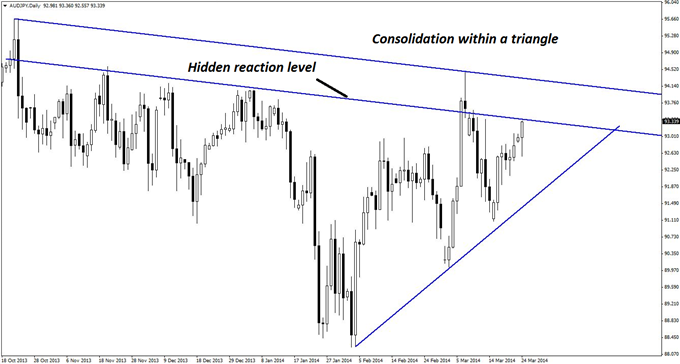 An AUD/JPY Channel Set-up with "a Twist"

It is rare for a choppy daily range to be of greater interest than a clean trending one, but with many of the cross currencies either in mid-trend or taking their time in pulling back, the most interesting set-up right now may actually be occurring in AUDJPY.

The daily chart below shows a consolidation within a triangle pattern, but there’s a twist. There is a hidden reaction level comprised of several previous tops, and with price once again approaching this level, it could well be the source of another reaction.

In consolidations, it is more realistic to aim for the rising line of support, which is approximately 170 pips or more away, but this is reasonable provided a good entry with tighter risk can be obtained.

As the reaction level is, by definition, a hidden one, it is wiser to allow for a certain degree of overshoot. There aren’t many previous horizontal levels of support or resistance to analyze, but nevertheless, the final resistance zone has been estimated on the four-hour chart below as 93.46-93.99. 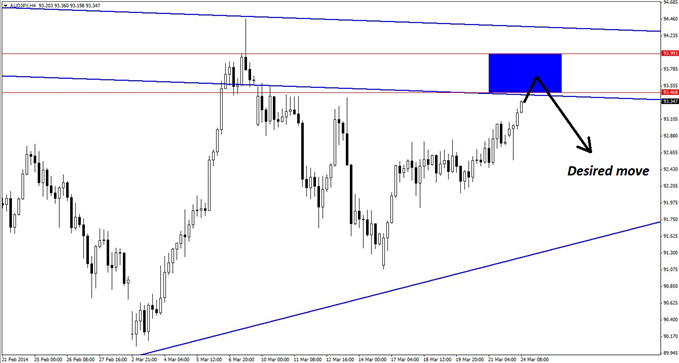 Price reacting off this 53-pip zone of risk may well begin a move lower, and even if not, the narrow overall risk profile adds validity to this set-up. Nonetheless, a better entry with even lower risk may be obtained from entering on a lower time frame like the hourly one below.

On the hourly chart of AUDJPY, there’s no particularly clear patterns other than a jagged Wolfe wave that may be developing. At the time of writing, price had already overshot the top of the channel, which is a requirement for the wave. Those who wish to obtain an entry this way will have to wait for price to close back below the top of the channel. As a result, this is best thought of as a “channel overshoot” type of trade. 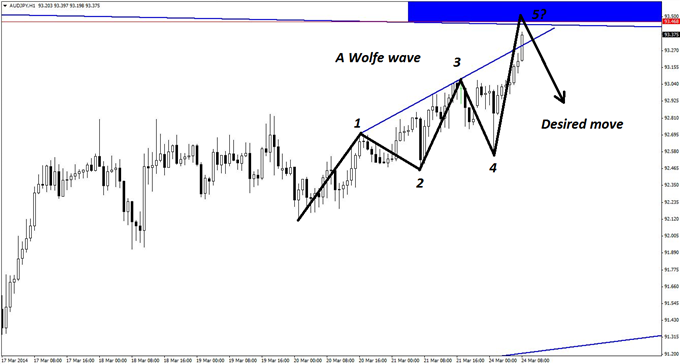 That said, there are several versions of the Wolfe wave, and the conditions here are minimalistic and sufficient according to past experience. This isn’t always the case, however.

In any case, standard triggers will apply, including pin bars, bearish engulfing patterns, and/or bearish reversal divergence on the hourly chart. A turn down from the highlighted resistance zone with any of these triggers would signal a sufficient short-entry opportunity. As usual, though, it may require two or three attempts in order to get in on this potential move.