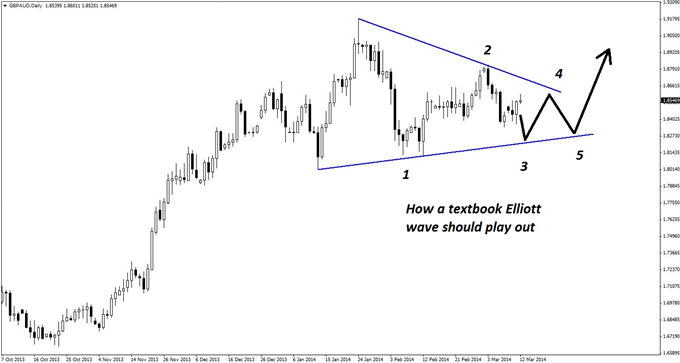 GBPAUD has been in a strong uptrend on the higher time frames for quite some time now, but the pair now appears to be in an established triangle formation. What is more interesting, however, is the Elliott wave implication for this pattern, as seen on the below daily chart.

According to standard Elliott wave theory, a triangle should have five legs, and in the case of GBPAUD, only the first two are clear at this point. The third wave appears to be in progress, and considering these waves tend to have two "legs" to them, the most immediate trade of interest would be the opportunity to ride it down.

Although countertrend in nature, there is a possibility for a 350-pip move to the support level, which is quite sufficient for a swing trade, not to mention an intraday set-up.

Whether or not the triangle formation will play out as theory suggests is another matter, but for the most part, if the set-up triggers and can be taken to the breakeven level quickly, that is of little consequence. Afterall, another long trade can then be initiated once GBPAUD reaches the bottom of the triangle.

The key resistance zone on the four-hour chart (see below) is easily obtained from a study of past resistance, and indeed, price has already tagged this area. However, given the sudden surge of momentum just prior to the touch in the form of the long bullish candle, and in recognition of the countertrend nature of this trade, it is best to allow for a second test before initiating a short position. If the trade runs without allowing for this more conservative entry, so be it. 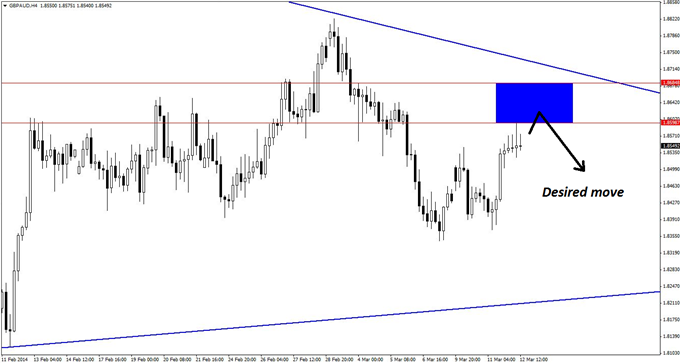 The risk zone emerges as 1.8598-1.8684, which is a reasonable 86 pips when considering the overall risk profile of this trade. Nonetheless, this may be too much to stomach for some traders, and for this reason, the ideal trade entry would be taken on the hourly chart.

As seen below, the hourly chart of GBPAUD lends some credence to the trade in the form of a large-scale Gartley pattern. This particular set-up may seem controversial to some harmonic pattern purists, especially since there are higher highs on the left side of the chart, but past experience dictates that this Gartley formation is acceptable. 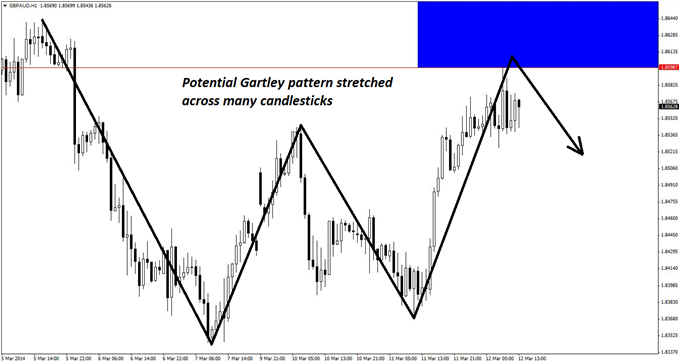 In this case, the ideal entry signal would be bearish reversal divergence, although pin bars and/or bearish engulfing patterns would also be acceptable. As always, traders are advised to be prepared to make two or three attempts to get in on this move.