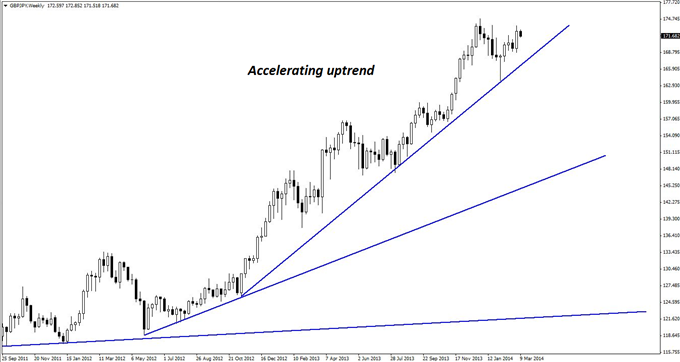 GBPJPY is infamous for its volatility, but in spite of that, the pair is actually trending rather well in the bigger picture. The weekly chart below, for example, shows that GBPJPY has been in an accelerating uptrend for quite some time now.

The question that usually arises in such uptrends, however, is where to find proper entry points for which risk can be better controlled.

The daily chart below is exhibiting a rather interesting retest of a declining line of resistance. Most traders will recognize the triangle formation that has been completed, but not every trader will remember to watch for the retest of the broken trend line, which is occurring right now. Should the bounce continue, it could result in the continuation of the prevailing uptrend, which would contain at least 300 pips just to reach the daily high. 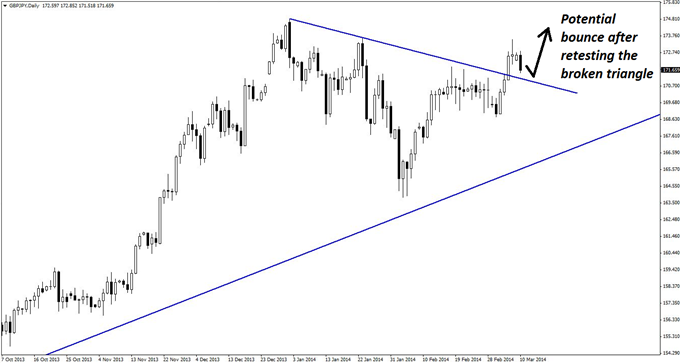 The four-hour chart below contains plenty of support levels that are derived from previous horizontal levels of resistance. In this case, the final support zone is 171.19-171.74. 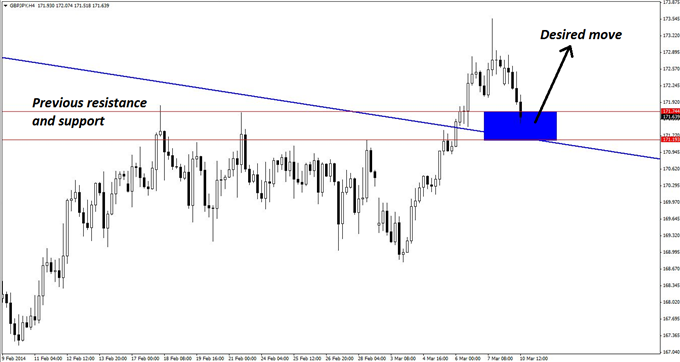 This 55-pip zone of risk is especially attractive for this particular pair, especially given the potential for a sizable upside move. Nonetheless, intraday volatility is a risk and the hourly chart is a safer option for obtaining an entry.

The hourly chart below shows a fair amount of downward momentum, which would normally cause some second guessing about this trade set-up. However, the slight channel overshoot actually validates a Wolfe wave pattern in accordance with relatively loose rules developed from past experience. 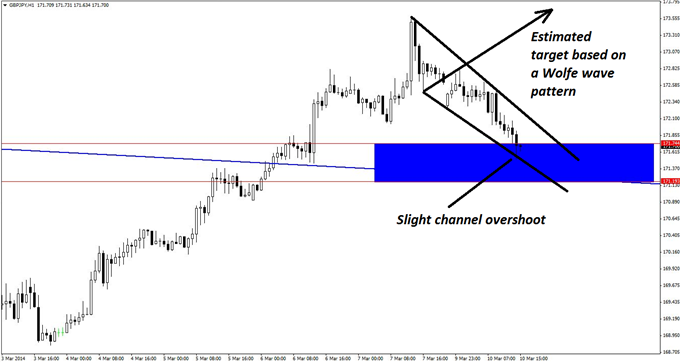 The exact Wolfe pattern is beyond the scope of this analysis, although readers are free and actually advised to research it, as there are several versions and applications. From previous experience, however, the overshooting of a relatively well-defined channel is often enough to create a reaction, and the textbook target would be the line indicated, which actually becomes larger over time.

Nonetheless, the preferred triggers are still the usual suspects: pin bars, bullish engulfing patterns, and bullish reversal divergence on the hourly chart. Two or three tries may be necessary, as GBPJPY has a habit of stopping out trades before ultimately roaring in the desired direction. In this case, though, it’s a high-quality set-up that justifies the risk.