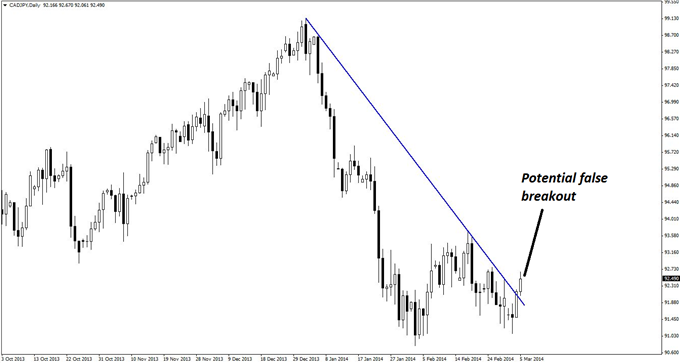 As markets continue to prove choppy, and on the heels of yesterday's surprising stop-out in CADCHF, this particular trading approach appears to have entered a lower-probability environment. Traders are often spooked by this, as it is possible to have several stop-outs in a row. The ability to move on depends upon having both back-tested and forward-tested the applicable strategy. Regular readers will recall the period in December that was similarly tricky, but also know that January easily yielded a spate of winning trades that more than erased all of December’s drawdowns.

In total, one very important lesson in itself is this: The best response to such trying market conditions is to continue to take trades, albeit cautiously and in strict accordance with one's own proven trading plan.

Now, as seen below, CADJPY has just broken a declining line of resistance on the daily chart. As always, the first suspicion is that this could be a false breakout, or that it will at least retest the top side of the previous resistance-turned-support. Either way, a move back down in the near future can be anticipated.

On the four-hour chart below, previous horizontal support and resistance suggest a resistance zone of 92.59-93.00. This represents a risk of 41 pips, and possibly less when taking qualifying short positions on an hourly chart. 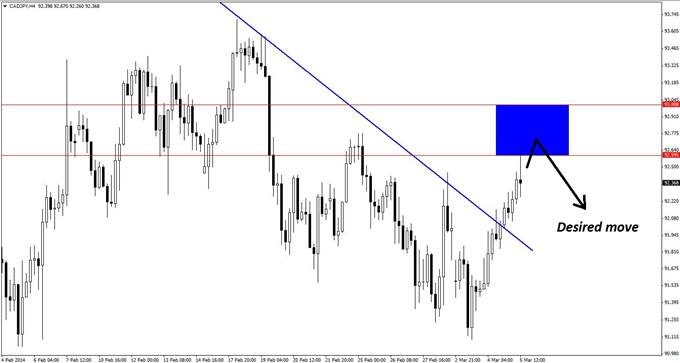 Just from a visual examination of the charts, we see potential for 130 or more pips to the downside, which makes for compelling risk profile. Moreover, the fact that this trade is in line with the daily trend is all the more encouraging.

The hourly chart below has just begun to flirt with the key resistance zone, and fortunately, a false signal in the past two hours may have been avoided. At this point, the ideal scenario would be for price to make a higher high, and then to provide a reversal trigger, such as a pin bar, bearish engulfing pattern, or bearish reversal divergence on the hourly chart. 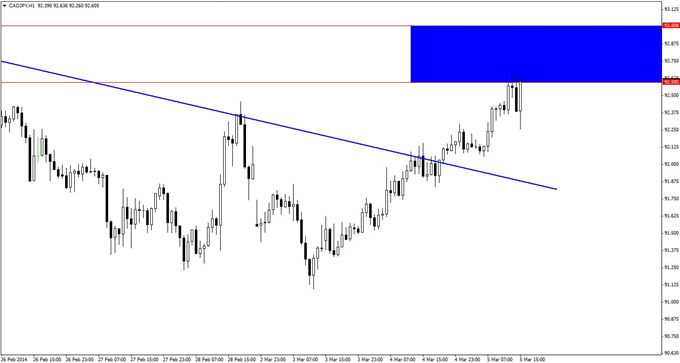 Two or three attempts can be made to get in on this trade. Overall, however, traders should remain extremely cautious and willing to scalp parts of positions out at the first sign of trouble in order to protect valuable profits. Considering the current state of the markets, defense is the name of the game.