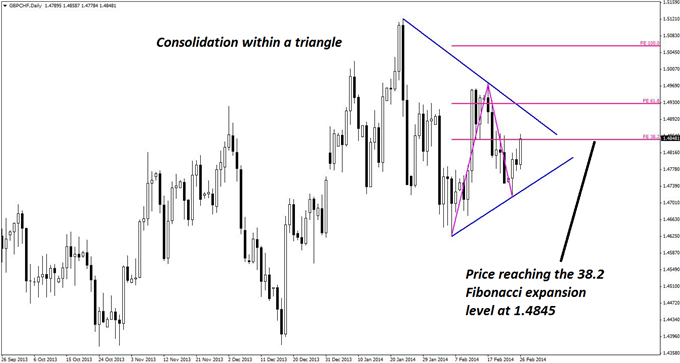 As many currency pairs move into more confusing territory amid deeper pullbacks on their respective daily charts, the market environment is becoming one where probability favors the downside in many cases.

There are several valid responses to these conditions, one of which is to reduce risk on each trade. This will be particularly attractive to those who have been on winning streaks and wish to preserve recent gains.

Also, bear in mind that it’s best to not try to outsmart the market, so the best response is still to steadily take trades as the set-ups are being presented, and then manage each position as the market response develops.

The daily chart below of GBPCHF reflects a longer-term uptrend, but also a triangle-type consolidation pattern. Applying a Fibonacci expansion to recent price action reveals that there is a level of hidden resistance at 1.4845. Alone, this would be insufficient reason to take the trade, but Elliott wave theory provides another potential reason.

According to Elliott wave theory, every triangle should consist of five main waves, each containing a three-legged move. Thus far, there have only been three of these waves, which suggests that the current upswing should soon turn around within the triangle.

On the daily chart below, the 38.2% Fibonacci expansion level has been retained for reference, and a rough plot of how it should develop according to classic Elliott wave theory has been supplied. Of course, in the real world, anything can happen, but the best response is simply to enter short at the overhead resistance level in anticipation that this pattern will develop and ultimately complete. 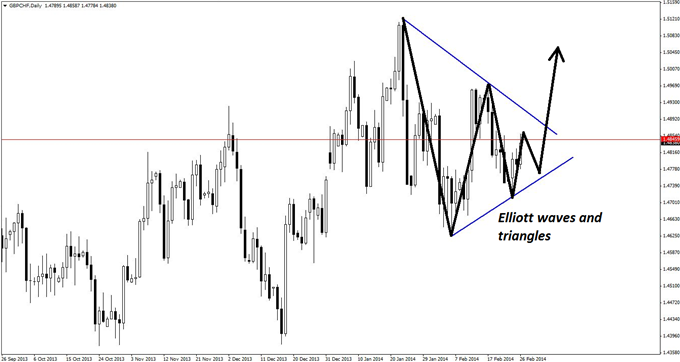 The four-hour chart below readily provides a resistance zone using the 38.2% Fibonacci expansion level coupled with previous support and resistance for GBPCHF. This key zone where a reaction is likely to materialize is 1.4845-1.4899, or 54 pips deep. That level of risk is very much acceptable for any cross pair involving the British pound (GBP). 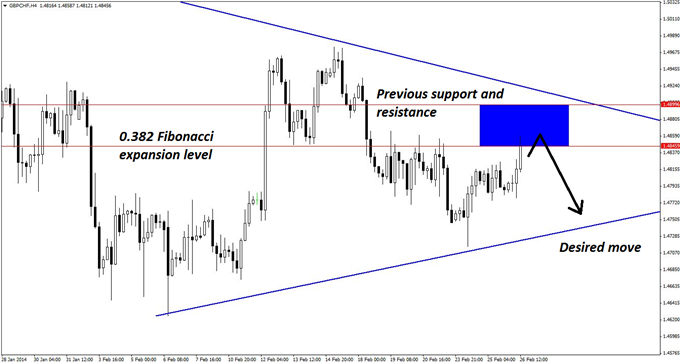 A move to the bottom of the triangle formation would yield 100 pips or more, and although this trade is slightly less “juicy” than some others in terms of risk profile, when considering the consolidating nature of the markets and the need to be defensive in trade management, it is still quite appealing.

Any potential trade entries should be found on the hourly chart (not shown), which will facilitate a reduction in risk. Acceptable triggers will include pin bars, bearish engulfing patterns, and bearish reversal divergence.

Finally, and as always, two or three tries may be needed to trade this set-up, and indeed, multiple positions should be used in order to scale out should the trade begin to hesitate after the entry.