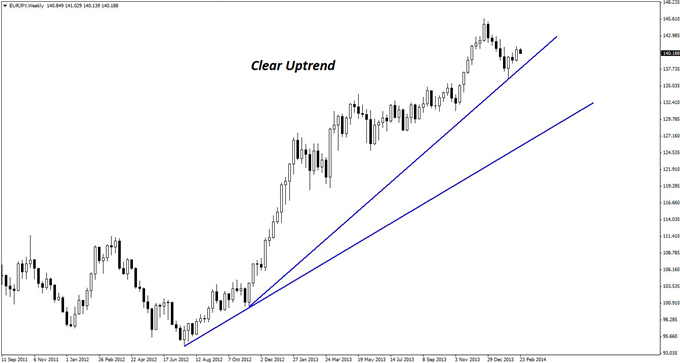 A EUR/JPY Set-up That Flew onto the Radar

Today's trade developed quite suddenly, as EURUSD began a fall that is also being reflected in other EUR cross pairs, including EURJPY. Whenever there is a sudden drop, traders hurriedly look to news in order to explain the price action, and sometimes, that’s perfectly valid. However, the more important question is how to benefit from changing price action, and today's EURJPY trade is an example of this.

The bigger picture from the below weekly chart provides a clear uptrend as a backdrop for this trade. Admittedly, the larger trend has been losing momentum, but even a week's worth of rising price action would easily help facilitate a trade on the lower time frames.

The daily chart below presents some more confusing price action by way of the recent downward move. However, as shown, the declining line of resistance has been both broken and retested. This suggests that the best response to the current decline is to assume that the rising trend line will hold and there could be some kind of reaction off of it. 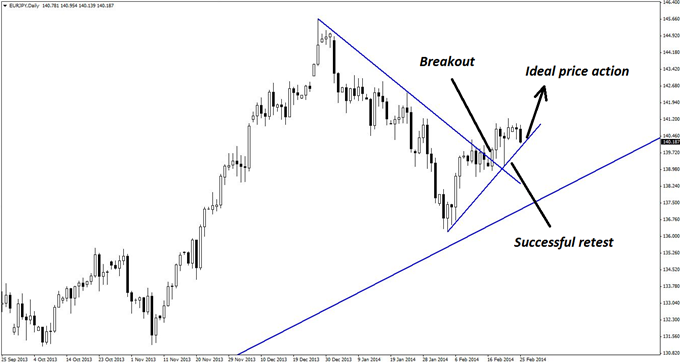 The four-hour chart below gives a clearer idea of where support might reside, as there is a confluence of several previous horizontal resistance levels and the rising trend line in play. 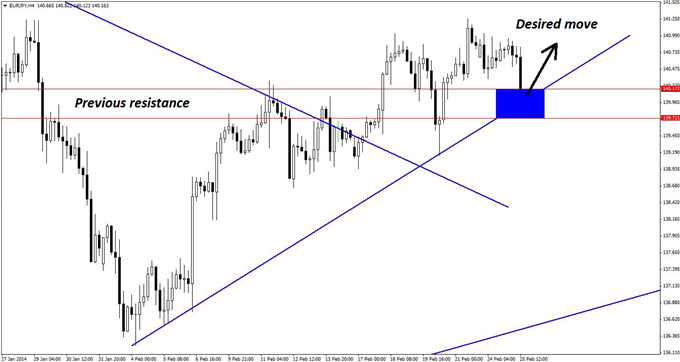 The actual zone of support is 139.72-140.17, or 45 pips deep. This is reasonable risk given that there are more than 100 pips even to the most recent high on the four-hour chart. Nonetheless, more accurate entries would be much preferred, and thus, the hourly chart is a better place to look for a potential trigger.

On the hourly chart below, the bearish momentum may initially appear alarming, but it is also encouraging to note that a relatively wide declining parallel channel coincides with the projected zone of support, suggesting that prices may at least put in a bounce. 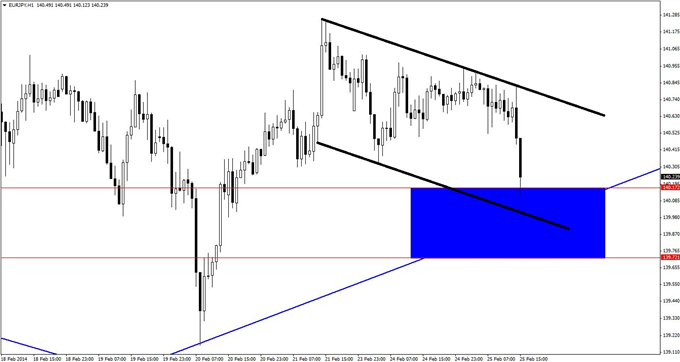 Acceptable triggers would include pin bars, bullish engulfing patterns, and/or bullish reversal divergence on the hourly chart. There, the news should digest itself within one or two candlesticks, and there may then be an ample opportunity for the bulls to show their hand.

As always, anything can happen in trading, so two or three tries may be required in order to trade this successfully, but given that most stop losses on the hourly chart for EURJPY require less than 30 pips, this is an entry opportunity that is well worth considering.