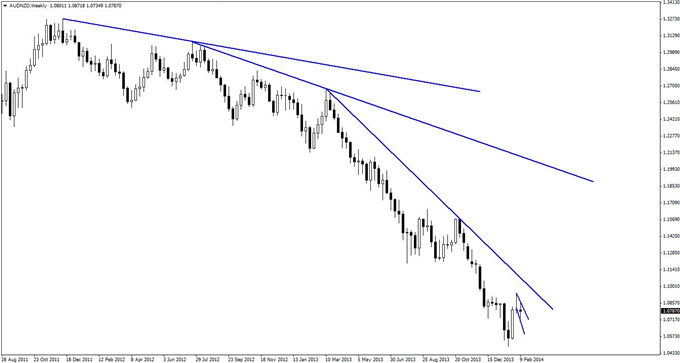 A Nimble Trend Trade in AUD/NZD

The long set-up we targeted yesterday in AUDNZD did not materialize after the pair showed surprising strength, rallying upwards before even touching the desired support zone. However, while this may invalidate that trade set-up, it in fact gives rise to a new one.

Before examining today’s set-up, it is worth noting that the market environment appears to have shifted again. Readers will undoubtedly have noticed that since late-January, markets have started to move out of sync again, with several recent trades not triggering. We've been here before, and good markets often give way to touch-and-go phases like this. Moreover, it’s anybody's guess how long it will last.

For now, it’s actually good that the changing rhythm is mostly resulting in missed trades rather than losing ones. While it is not quite time to play strict defense, traders should be more wary. Moreover, now is certainly not the time to be increasing position sizes.

Today, we’ll focus on the continuation of the trade from yesterday, which is now aligning back with the higher-order trends.

On the below weekly chart of AUDNZD, we see that the downtrend is obviously still intact, although price is admittedly some ways from resistance at this point.

Nonetheless, a trend trade would be permissible as long as there was a clear potential turning point on a lower time frame.

The daily chart below shows price heading up towards a resolution point where it may break out of the narrow declining channel, in which case the bias would be for AUDNZD to retrace and test the declining line of resistance. Alternatively, price may respect the channel and head lower. Newer traders instinctively dislike this kind of uncertainty, but it is actually this very conflict that creates the potential for a viable trade. 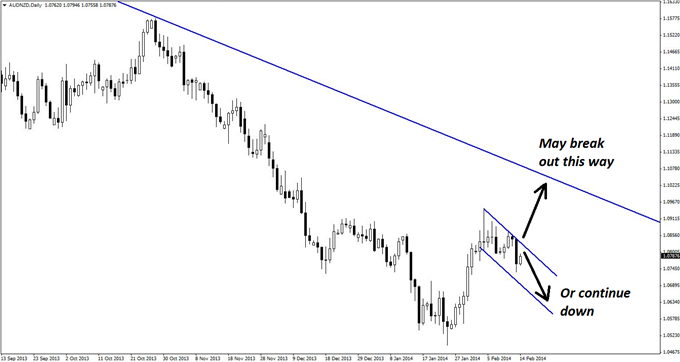 Ultimately, since no one has a crystal ball, the best course of action is still to take the trades that are being presented. Yesterday, the most compelling set-up for AUDNZD was to the upside, and now, the closest resistance is to the upside, making a short set-up more preferable today. 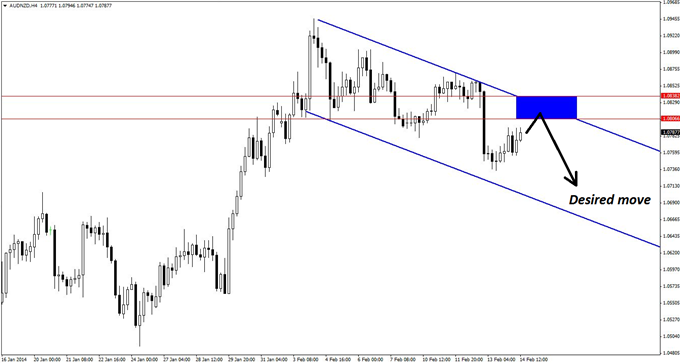 The highlighted area would be the ideal location for short positions taken on the hourly chart (not shown). The usual trade triggers, including bearish reversal divergence, bearish engulfing patterns, and/or pin bars would be used.

The risk zone for this set-up is a mere 32 pips deep, and given that each set-up will likely offer even smaller risk, it is more than acceptable for a trade that has more than 140 pips to move, even if it only reaches the bottom of this small channel. (Moreover, the previous daily low is approximately 300 pips from the current price). That said, two or three attempts should be made to get onto this move.