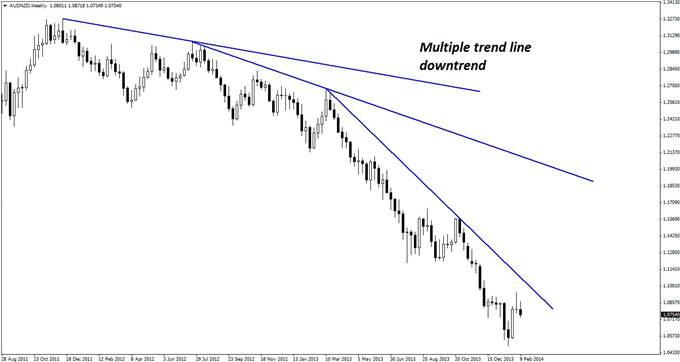 An AUD/NZD Long Entry with a Surprise Twist

Whenever a trend line breaks, the expected move is often a retest of the same recently broken trend line. However, occasionally, the break is so clean and clear that the retest may occur a considerable distance from the initial trend line, and this may well be the case right now in AUDNZD.

As shown below, the weekly chart is sporting a multiple-trend-line downtrend, which has been accelerating ever since it began in 2011. This is worth bearing in mind, as it means that taking a long in this environment goes against the larger trend. Nonetheless, we will discuss a few reasons why it may be worth considering.

The daily chart below sports a newly broken trend line with momentum on its side. In cases such as these, the move may already be underway, and a "retest" of the broken trend line is unlikely to occur near the actual line. As a result, it is wiser to analyze support levels that are closer to the current price action, which we’ll soon do by looking at the smaller time frames.

Most importantly on the daily chart, however, is that the bias is long because a clear break of one trend line usually brings a higher-order trend line into play. Of course, price may move sideways until it bumps into it, but the most optimistic scenario in this case would be for price to head straight up for approximately 300 pips before encountering resistance. 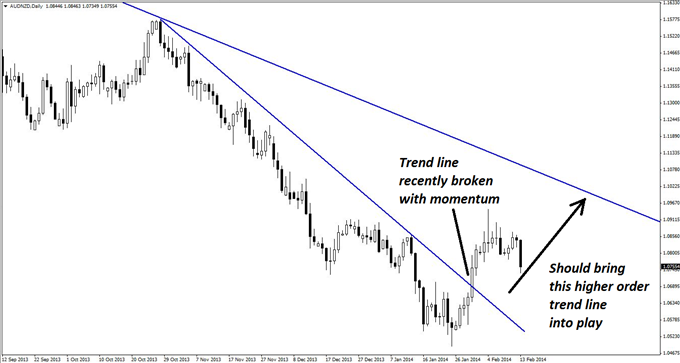 The four-hour chart below shows a very nice confluence of support at the marked zone. This area is combination of previous horizontal levels and a clear declining parallel channel. The exact zone is 1.0675-1.0733, which is 58 pips deep and acceptable as a potential risk area when compared to the 90 pips that stand between price and even the top of the declining channel.

Guest Commentary: Confluence of Support on 4-Hour Chart of AUD/NZD 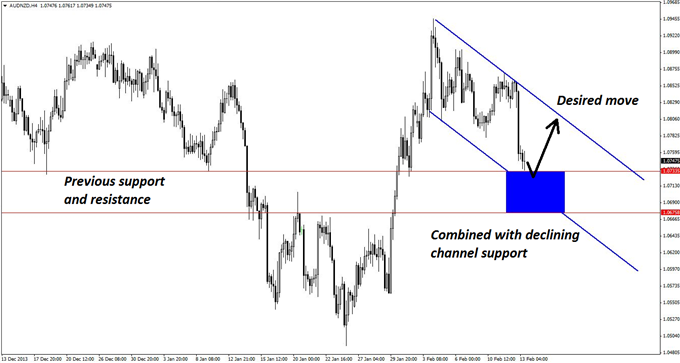 Although this trade would be perfectly acceptable on the four-hour chart, a narrower risk area is always preferred, which is why we continue lower and examine the hourly chart as well.

The move on the hourly chart looks more disconcerting, however, with a distinct disadvantage to this trade displayed in the long bearish candlestick. This suggests that bears are still strong in the market, and it may even mean that the first of any reversal signals within the key support zone may fail. 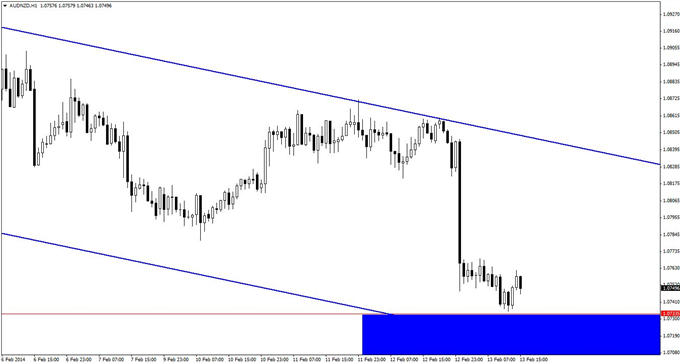 In this scenario, the support zone is still valid, but given the countertrend nature of this trade on the weekly chart and the bearish momentum on the hourly chart, it is best to be especially conservative when trading this set-up. Thus, traders would be well advised to treat the first trigger on the hourly chart as suspect and stand aside. Some patience, however, should yield a second, higher-probability entry trigger.

The usual suspects—pin bars, bullish engulfing patterns, and/or bullish reversal divergence—will be valid entry signals for this set-up, and two or three tries (not counting the first trigger, which we’re discretionarily taking as being false and ignoring) should be made to get onto this move.

It may take a while for this pattern to play out, and while it would be frustrating if the first trigger worked, it is far better to be out of a trade and wishing to be in it than the other way around. Thus, with this trade in particular, patience is the most important factor.