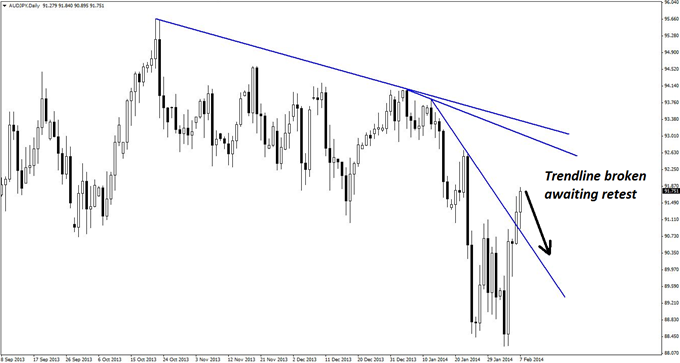 An Apparent False Retest in AUDJPY

As markets digest a worse-than-expected US non-farm payroll (NFP) announcement, the typical news-related volatility is beginning to create some attractive set-ups, the most interesting of which seems to be a false retest of a broken trend line in AUDJPY.

On the daily chart below, the pattern looks like a classic trend line breakout/retest set-up to all but the most observant. However, there are several other features of note on this chart:

Either way, there is at least some reason to believe that there is room for a short trade at this juncture in AUDJPY.

The four-hour chart below shows the retest more clearly, and at this level of magnification, it is clear that the test was a knee-jerk reaction to the NFP report rather than a result of normal interaction between bulls and bears. That is one reason why some might consider this a false test. 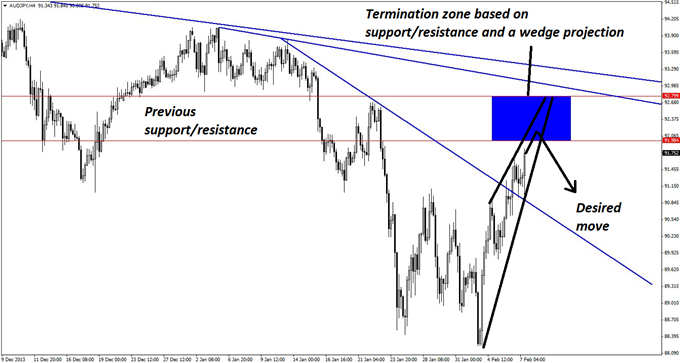 Assuming this is, in fact, a false test, then the next step would be to work out a reasonable zone of resistance. The reversal zone projected for this move is based on the narrowing of the rising wedge pattern and previous support and resistance. The final zone has been determined as 91.98-92.79, which is an area 81 pips deep. Given that a move to the trend line would be more than 100 pips, this is satisfactory, although admittedly, this is not an ideal risk/reward situation.

Because of the risk profile, a precise entry is more important than ever in this particular set-up, and for that we turn to the hourly chart (see below).

The hourly chart is notable for the fact that the projected reversal zone occurs in an area that concurs with a pennant breakout projection. The pennant actually has a more optimistic upside target, but it is still within the trade plan. 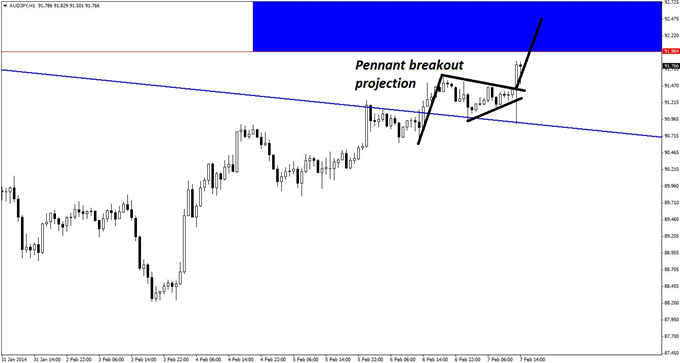 Given that either the four-hour wedge pattern or the hourly pennant's projected target may materialize, it is wiser to simply take two or three trades as price arrives at this general area of resistance. Bearish reversal divergence, pin bars, and/or bearish engulfing patterns would all qualify as valid triggers for this trade.

The risk (per trade) on the hourly chart should average about 30 pips, which would make even a 100-pip move a nice trade.