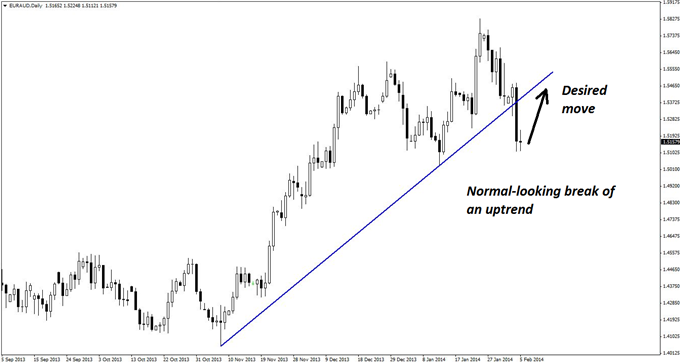 Today’s trade is a bit more complex than usual despite ultimately being an attempt to buy a pullback in an overall uptrend.

As seen below, a rising trend line has just been broken on the daily chart, and price would typically be expected to retest the underside of the broken trend line before either confirming the break or continuing higher. Even if only rising as far as the broken trend line, there would be 277 pips in this trade.

However, the picture immediately becomes more complex when considering price action on the four-hour chart (see below).

The most notable feature about the pullback on this level of magnification is that it has developed into an impressive downtrend, and in spite of the prevailing uptrend on the daily chart, this might prove problematic. However, some pattern recognition techniques, when applied to this formation, seem to reveal a possible extended third-wave Elliott pattern. 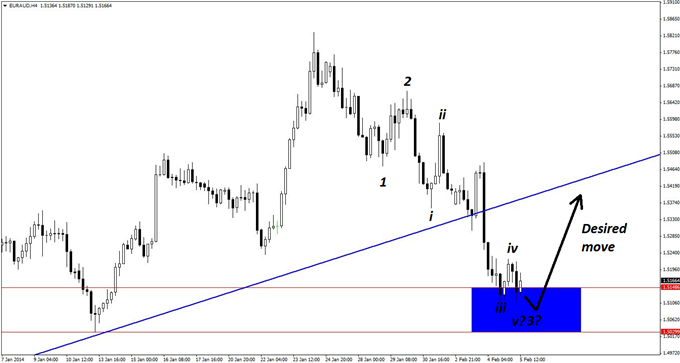 In this formation, the third wave down (numbered “3”) is in the process of completing, and the analysis suggests that it will make a new low before turning up because there is a smaller five-wave pattern (numbered “i-v”) in progress.

The smaller pattern is what "extends" the third wave. It is usually considered dangerous to catch third waves, as they can provide surprising momentum, but the daily uptrend in combination with strong previous horizontal support makes a case for trading this effectively.

The support zone has been defined as 1.5029-1.5148. Although this support zone is 119 pips deep, it is worth noting that it has already been pierced, and because traders are expecting a lower low, the risk area is, in fact, only approximately 80 pips in practice. Even a conservative pullback in the downtrend to a declining line of resistance (not shown) would have at least 200 pips in it, and thus, the risk profile is quite favorable, especially if this turns into a runaway trade.

All that remains to be seen is whether price will indeed deliver a lower low on bullish reversal divergence, or marked with a pin bar or bullish engulfing pattern. This should happen on the hourly chart (see below), although two or three attempts may be needed to get in on this trade.

It should also be noted that in order for this set-up to be considered complete, price must make a lower low, regardless of which entry trigger is used. 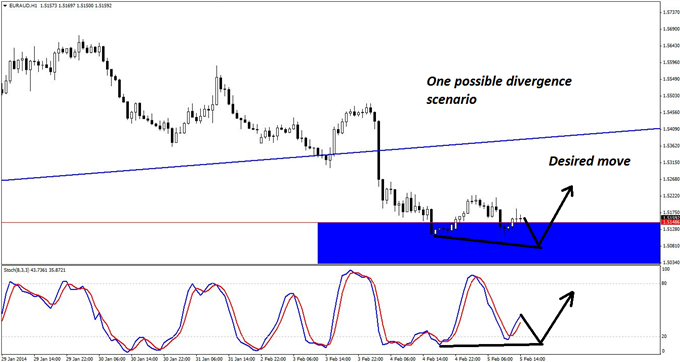 To aid readers, one possible divergence has been visualised on the chart above. Any type of divergence would be acceptable, but this is the most likely set-up if everything goes according to plan.

One final note: Traditional Elliott wave traders may well balk at this set-up, as they normally point out that even if things go well, the extended wave 3 may simply result in a shallow wave 4 to the upside before spiking down to complete a wave 5. To this, there are three points, the first two being theoretical, and the final one being pragmatic: