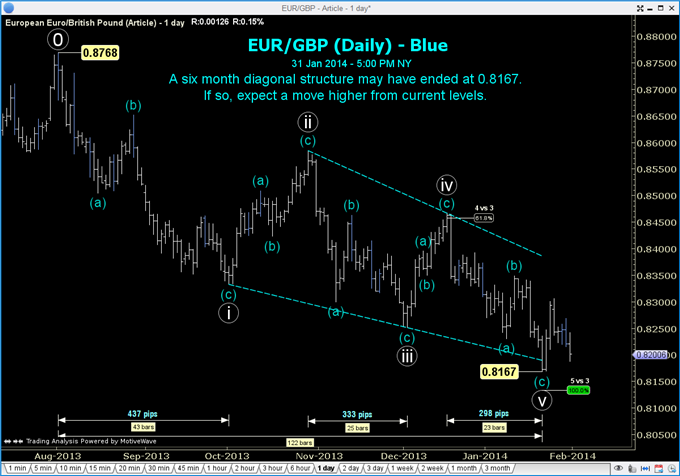 An "Audacious" Long Set-up in EUR/GBP

While EURGBP isn’t a pair we typically enjoy trading, sometimes a structure is presented that’s just too hard to ignore. Today, we see a potential trade that’s based on analysis from both the daily and hourly time frames. Together, they provide an opportunity to try to buy a “bottom,” which is, admittedly, a perennially dangerous task in itself.

The below daily chart of EURGBP shows our Elliott wave count starting in August 2013 and extending into late January. It’s an Elliott Wave diagonal, a five-wave structure where all five legs comprise three waves each. By definition, it makes progress in an overlapping manner. Here, the fourth leg must move back into the area of the second leg. This makes it different from the more common motive structure called an impulse, whose fourth wave cannot (in theory) intrude into the area of the second wave.

While the overlapping requirement makes it different from an impulse, there’s an important attribute that both types of motive waves share: the third wave must never be the shortest of waves one, three, and five. By itself, that’s a key component that makes the structure very tradable.

In this case, the first wave was 437 pips and the third wave was 333 pips. This rule means that the fifth wave cannot be 333 pips or larger because that would make the third wave the shortest of waves one, three, and five. With that, the fifth leg needed to stay above 0.8130.

Though many traders will trade in the opposite direction to the fifth leg as it approaches a level like 0.8130 (in this case, EURGBP reached a low of 0.8167) and place their stop a little behind 0.8130. We chose to wait, however.

There are two other attributes of Elliott wave diagonals that give us greater confidence that we’ve labelled this structure correctly:

Therefore, factoring these traits in as well, we’re keen to try to buy a possible bottom while price is still in this area.

As mentioned, we chose to wait instead of buying EURGBP as it approached 0.8130 because we wanted to see if there was any evidence of an impulsive move to the upside. And, to that point, the hourly chart below shows a sharp, five-wave impulsive move higher (see blue wave (i)) followed by what seems to be a comparatively prolonged WXY zig-zag correction (see blue wave (ii)).

Price recently tested the 78.6% retracement of the impulsive move higher (sometimes called “the last line in the sand”). The low of the correction was near the WXY equality level (see Fib Y vs. W: 100%) and also perfectly aligned the smaller-degree ABC zig-zag equality level. In light of this, the decision to wait and analyze more price action now gives greater confidence when placing a trade.

Guest Commentary: The Case for a Bottom in EUR/GBP 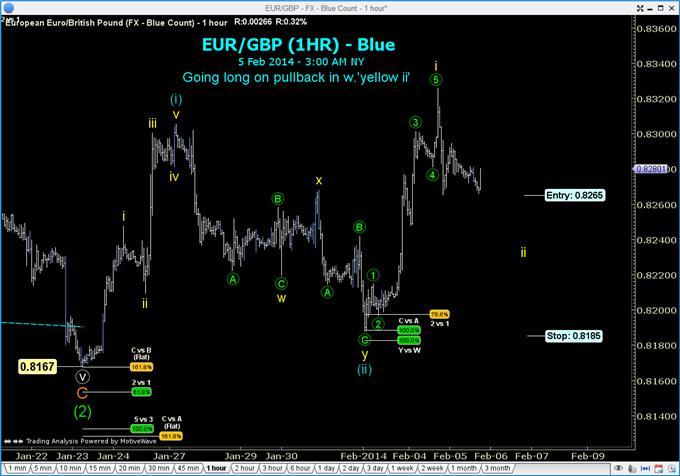 While we could have traded late in the blue wave (ii) pullback, we waited once more for an impulsive rise. That occurred in the form of yellow wave i, and we’re now going to buy the pair during the yellow wave ii pullback.

Therefore, the trade is to buy EURGBP at 0.8265 (or lower), placing a stop at the low of blue wave ii (0.8185). For this 80-pip stop, we’re not setting a target at this time, but we’re potentially looking at hundreds of pips, and as a result, this trade will take many weeks to complete.

The risk profile is very good, but there is real risk in this trade. EURGBP has fallen 600 pips over the last six months, and it takes some audacity to try to call a bottom. If price continues higher, though, we will look to add to this in time.