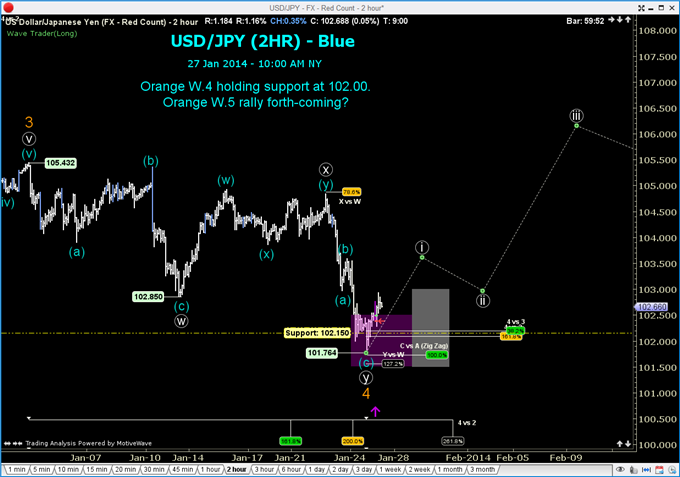 A USD/JPY Long with Healthy Validation

Like many Japanese yen (JPY) pairs, USDJPY has been correcting from highs established around the start of this year. There are two independent reasons why that correction may be coming to an end, and today, we’ll discuss those reasons as well as a trade idea designed to take advantage of that situation.

The 90-minute chart of USDJPY below shows price action from the early-January high of 105.43. By mid-January, Elliott wave analysis could be used to count a potentially completed correction wave down to 102.85. This was in the form of an ABC flat (a flat because the blue b-wave retraced at least 90% of the a-wave).

For the next week, it seemed that price was resuming its upward trend, however, a strong, 300-pip decline in recent days below 102.85 makes it very clear that the correction has become complex. The Elliott wave count has been revised to a complex WXY zigzag (a zigzag because the white x-wave retraced less than 90% of the w-wave).

The final white y-wave lower can almost be deemed complete, so we’re interested in buying USDJPY once again. When the y-wave started, we were originally looking for it to end near 102.20. That level lined up with two key fourth-wave Fibonacci levels and the low of the prior-degree fourth wave. The fact that price has fallen some 50 pips below this level is only of minor concern because the time taken in this y-wave is considerably shorter than the corresponding w-wave.

To make the trade “worthwhile” from a risk/reward perspective, we’d need to achieve a target at least 50% larger than the size of our stop (i.e. at least 180-225 pips). Essentially, if the fourth-wave correction is over, price is very likely to make a new high above the third-wave high of 105.43.

We’ll look to set two targets for this position with the first being slightly below the prior high at 104.75 (225-275 pips from entry). The second target will be 105.40, which is just below this prior high. Clearly, these are both conservative targets, although higher ones can be sought once the final low and the subsequent wave structure become more clearly defined.

Intermarket Factors That Support This Trade

There’s also an interrmarket component that favors this trade, however, and it’s arguably as important as the technical backdrop. With the Federal Open Market Committee (FOMC) meeting set to begin on Tuesday, the markets will be heavily focused on any commentary regarding the recent bout of risk aversion. Bonds have seen a massive move higher, which has driven corresponding yields lower. This is a relationship we’ve discussed at some length recently.

USDJPY is usually negatively correlated to the price of US bonds, and specifically ten-year notes, so when USDJPY is falling, ten-year notes are rising (and vice versa). In early January, ten-year notes made a low of 122’24 and have since moved higher to 125’16. This move appears to be in five small waves, so we’d be expecting a correction in notes. If we’re expecting a fall (now or soon), we’d also expect a corresponding rise in USDJPY, and though it would likely not start at the exact same hour, it would happen within a day or so.