While EURAUD has risen strongly for almost 18 months, this set-up involves a potential countertrend trade with a favorable risk profile. It doesn’t require trying to “pick a top” in search of a huge home run, but it’s worth considering nonetheless.

We’re not suggesting that the uptrend has ended, however, or that 1.5596 is a significant top. Instead, with no evidence to the contrary, we’re presuming that the uptrend is likely still in progress, but because price is currently a long way above the trend line (after a sharp rise from early November), there is an opportunity for EURAUD to correct back to the trend line.

The daily analysis alone, however, isn’t enough to formulate a trade plan, so we’ll also use Elliott wave analysis from the 1.5596 high to see if there might be a wave count confirming the case for a move lower, even if only a short-term corrective one.

The conservative count considers this a corrective wave (blue (a)-(b)-(c)). During the expanded flat, EURAUD made a low of 1.5029. 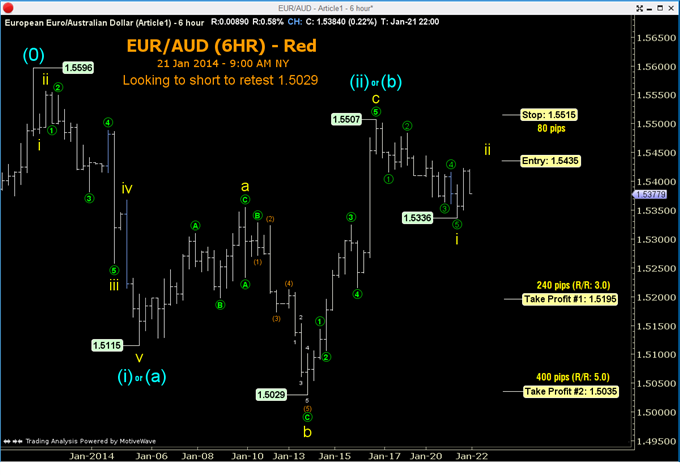 Since the recent high at 1.5507, price has moved lower to 1.5336 in what seems to be five small waves. From there, it appears to be correcting higher, which provides an opportunity to set up and enter a short trade.

To trade EURAUD on the short side right now, we’ll nominate a limit entry at 1.5435. Our stop will be placed above the recent high at 1.5515 (which also allows for the spread). With an 80-pip stop, we’re looking for one or more targets at least 120 pips away (at least 50% larger than the size of the stop).

How to Effectively Manage Risk

The risk profile for both of these positions is unusually high (3:1 and 5:1, respectively). This is deliberate because as a countertrend trade, it carries higher risk than trading with the trend.

This also allows us to place a smaller position size than normal (say, 30%-50% of a typical trade). By risking less, if the trade goes against us, our account is reduced by a fraction of our typical trade risk. However, if the trade succeeds, our account is increased by a “typical” trade profit. Regardless, more conservative traders may choose to pass on this set-up.