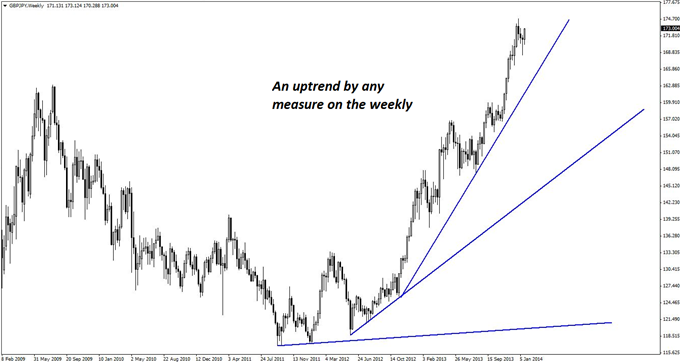 GBPJPY is sporting an uptrend according to all measures on the weekly chart, as shown below. It has recently found some resistance at the 1.236 external Fibonacci retracement of the previous downtrend (not shown). After the pin bar from last week, price is now headed up to challenge the highs. Whether this will prove successful, however, remains to be seen.

The daily chart, however, sports a different formation (see below). A rising trend line has recently been broken and is now being retested. Should the underside of that trend line hold as resistance, there could be 800 pips of downside potential, or perhaps even more. Although this set-up is countertrend in nature, it’s extremely tempting and shouldn’t be ignored. 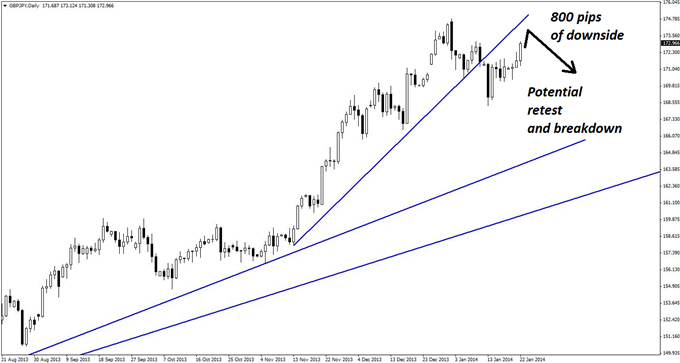 The four-hour chart below is a little vexing, however, as it exhibits a potential zone of resistance that is a quite sizable 167 pips deep. In many scenarios, this might be considered too large to trade, as there may be too many false signals before the actual move occurs. However, given that this is the most infamously volatile of all currency pairs, it makes it somewhat more acceptable, especially when the risk profile is viewed in the context of the potential 800 pips of running room if the trade works. 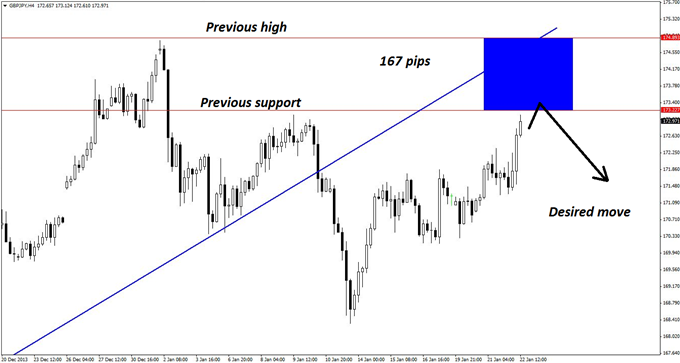 In all, the final resistance zone for initiating GBPJPY short positions appears to be 173.22-174.89.

As usual, though, this trade is to be taken on the hourly chart (not shown) in order to increase precision. The “normal” triggers that would justify an entry are bearish reversal divergence, pin bars, and/or bearish engulfing patterns. However, given how large the zone of resistance is, one may expect some false entries, and some traders may attempt to circumvent this by taking a more conservative trigger. This would include, perhaps, a very quick moving average crossover, like the 2 and 3 simple moving average (SMA) crossover, for example.

There are pros and cons to adopting such an approach. The obvious weakness is that it tends to trigger a late entry, usually at a less-favorable price. It also means that price has to travel further in order to provide a satisfactory reward-for-risk ratio. On the other hand, though, it is far less likely to provide a false signal.

The usual entry triggers are just as valid, but traders who use them will have to accept that instead of working on the first, second, or even third attempts, price may go on the fourth or even fifth signal.

It is strongly advised that only two or three attempts be made to get on the trend, because if this trade does not work out, this can be a very slippery slope for traders, particularly because it is still counter to the weekly trend.

Both types of entries (aggressive and conservative) are acceptable, but traders should choose their entry in accordance with their own unique trading plan and psychology.