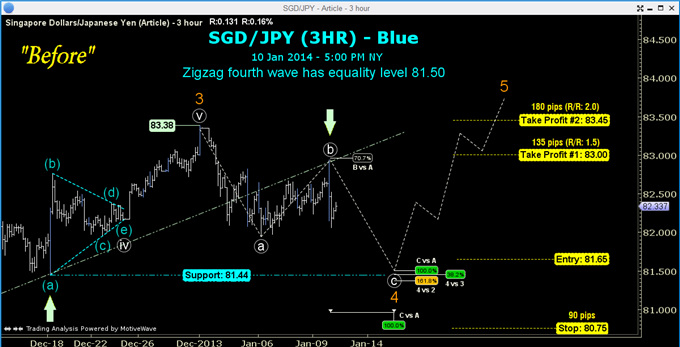 Recently, we published a trade set-up to buy the pullback in the Singapore dollar (SGD) against the Japanese yen (JPY) following the poor US non-farm payrolls (NFP) data. (See “2 Good Reasons to Buy the SGD/JPY Pullback.”)

Like many JPY pairs, SGDJPY had been moving lower since the start of the year, and this trade was initially designed to buy the pullback near its end. The limit entry has since triggered, and the trade is still active. We’ll now discuss how to manage that existing position and will even provide a way to add to that position now that it’s working out.

Trade management is such an essential aspect of successful trading, yet it is often overlooked in favor of the “sexier” aspect, which is finding the next trade.

Our original trade was based on the below chart and was analyzed using both Elliott Wave and Fibonacci ratios. The analysis eventually highlighted two possible turning points, or support levels: 1) near 81.40; and 2) near 80.90.

The right side of this chart shows our original trade parameters, where the limit entry was to buy at 81.65 with a 90-pip stop.

The updated chart below shows that the actual low was 81.30, which was very close to the first expected support level (near the original cluster of three Fibonacci ratios). At that time, price was still falling in the final leg from 82.93. Once filled, SGDJPY turned and moved above 82. Only 35 pips of our 90-pip stop were used (about 40%).

While many tend to focus on how much money they stand to make, arguably, the first step in prudent trade management is to reduce risk. In this case, we can do just that by raising the stop from 80.65 to 81.30, which immediately reduces risk by 60%. This was achieved by a judicious entry after detailed analysis, some of which was explained in the previous article.

Our next key focus from a trade management perspective will be to further reduce risk (perhaps altogether), but this will depend upon future price action.

We typically discuss trading from two perspectives, conservative and aggressive. The many shades of grey in between can determine the best course of action from these two outlooks.

Conservative traders (who almost always find something to worry about when trading) will be happier when having reduced risk by 60% while the trade continues. So if a conservative trader initially risked $1000 when placing this particular trade, moving the stop higher to 81.30 means that even if the trade fails, they now stand to lose only $400 (not $1000). This would undoubtedly make them “less worried.”

Even though the initial move higher from 81.30 and above 82 placed the trade in the black, conservative traders will worry if these gains disappear, even if only temporarily. When price rises, it rarely goes up in a straight line, and traders need to know and accept this is a normal part of trading.

How to Add to an Existing SGD/JPY Trade

Since the low at 81.30, price has risen impulsively to 82.34. On a smaller time frame, this move appears to be in five small waves, so we’re now expecting a pullback, which seems to be in progress. 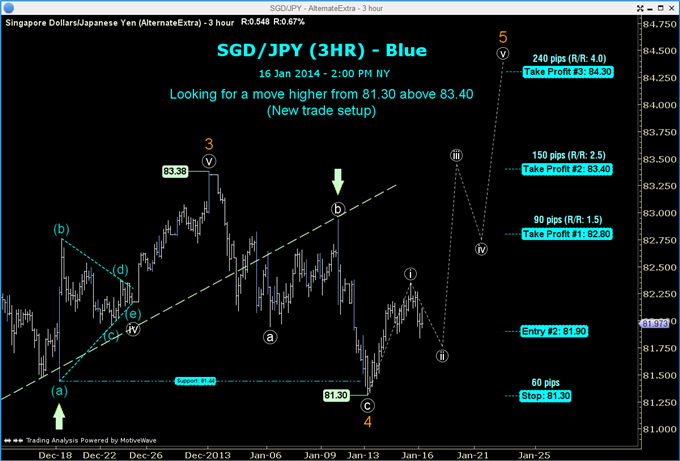 To trade SGDJPY right now, we’ll nominate another entry just above the 50% pullback at 81.90 (which also allows for the spread). Our stop will be the current low of 81.30. With a 60-pip stop, we’re looking for targets at least 90 pips away (at least 50% larger than the size of the stop).

Essentially, for each $1 we risk, we’re aiming for $4 in reward. A target as high as 85 is feasible for this set-up, although risk escalates once price surpasses 83.38.

What Could Go Wrong?

While the plan for this trade sounds very measured and perhaps reasonable, things can (and often do) go wrong in trading. The most obvious problem is that 81.30 may not be the final wave-4 low (in orange).

The early-January correction from 83.38 may not be complete, and if that’s the case, our original trade will be stopped out and the new trade won’t be initiated at all.

If the new position is taken, however, we’ve set a number of targets for the trade, and it’s possible that some may not be hit or may need to be revised lower at a later date. If the trade continues for some time, though, there will likely be a follow-up article discussing more trade-management issues.

While price remains between 81.30 and 82.80, this trade applies to those who are either taking this SGDJPY trade for the first time, or who took the previous trade and now want to add to that position.