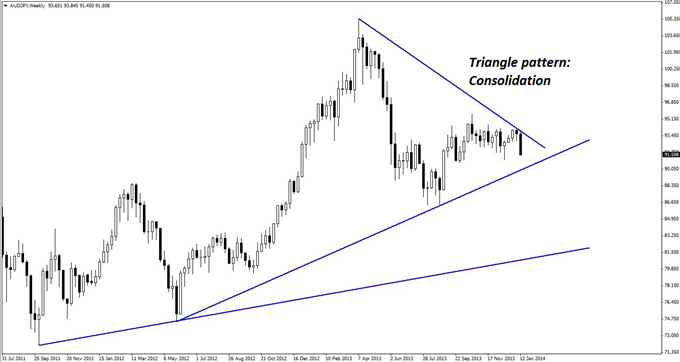 AUDJPY likely has many intraday traders spooked after its recent run to the down side. However, a look at the bigger picture offers a more interesting possibility where the pair may put in at least a short-term low in the near future.

Although the weekly chart below does not currently offer much in terms of trend direction that is relevant to intraday trades, it at least reveals a longer-term triangle consolidation area.

Thus, on the daily chart, more choppiness can be expected, but this also lends credence to the notion of applying a range-type strategy to engage with price.

The daily chart below sports a smaller triangle within the larger one. Price has just broken the support of this daily triangle and now looks poised to head further down. However, before it does, it is reasonable to expect a retest of the trend line resistance.

Guest Commentary: Triangle within a Triangle for AUD/JPY 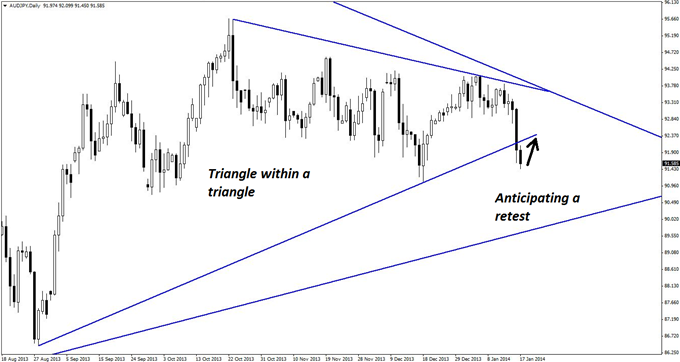 Although this may look small, it represents an 80-pip move. And, if the breakout turns out to be false, there are 200 pips until next resistance. Although those numbers make trading this on the daily chart unattractive, an intraday set-up would likely prove adequate.

The normal procedure would be to head down to a lower time frame to identify support or resistance, but in this case, the horizontal levels actually stretch far enough back that they are more clearly visible when zooming out on the daily chart, as shown below. 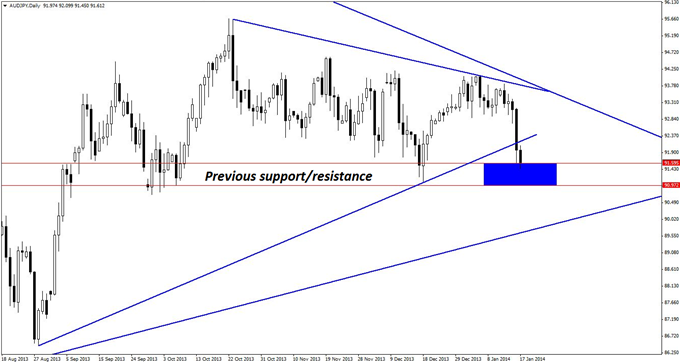 Analysis suggests that the best area of support is 90.97-91.59. This zone represents an approximate 62 pips of risk, which makes the trade more attractive from an overall risk/reward standpoint.

The four-hour chart below shows the strong recent down move that likely scared many buyers out of the market. Due to the extreme momentum and lack of evidence of strong buying, this represents a considerable risk to those using it to trigger an entry. Instead, it would be wiser to either, 1) enter earlier, before four-hourly buyers take action; or 2) enter later, after a genuine move up has been confirmed. 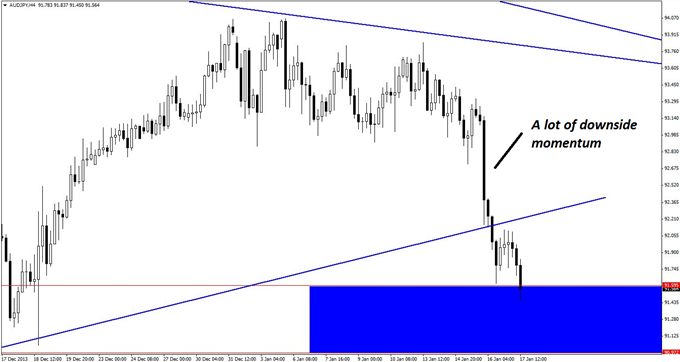 For the purposes of intraday trading, the earlier entry presents a more valid option, as it allows for nimble trade management and scaling out if conditions prove unfavorable. It may take two or three tries to get this trade right, but the prize for those who are successful will be an early entry.

With luck, this will prove to be a false breakout of the daily triangle, and price will then reverse quickly to the upside. If it doesn’t, however, there will be another trade if/when price does retest the underside of the triangle from which it has just broken out.