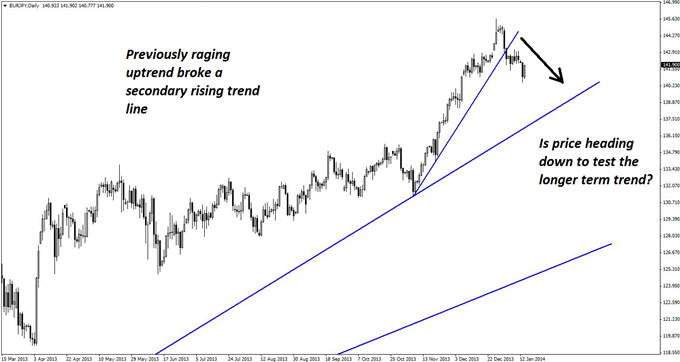 After a number of FX crosses proved quite profitable yesterday, including the GBPJPY set-up we covered here, the juicier trades have now shifted to the intraday arena. Although opportunities for initiating swing trades are temporarily scarce, they should be back in force within the next few days. For the time being, though, intraday trades are in play, and EURJPY is a pair of particular interest today.

As seen on the daily chart below, the momentum uptrend has been broken, and the trend line has been retested. Following classical trend line theory, price should now head towards the rising line of support due to a longer-term trend.

Of course, it will likely have its hiccups along the way, and it may well be exhibiting one now, but this provides potential opportunities to hop onto a move. Considering that price is currently more than 450 pips away from the trend line, there is plenty of room for this trade to work. It is relatively straightforward when taking short trades at logical points of intraday resistance.

The four-hour chart below shows a declining parallel channel, with price now having pulled back to its upper quarter. 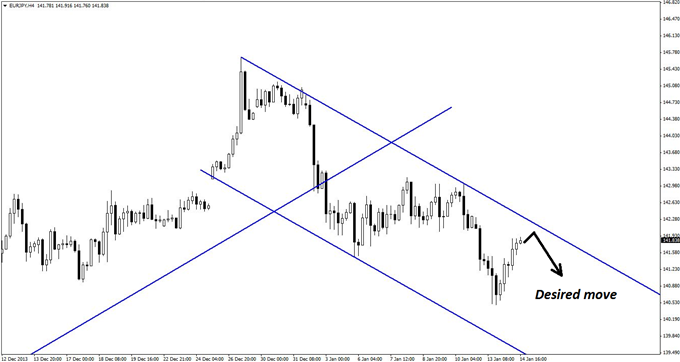 From here, all that remains is to fine tune an estimated resistance zone and decide on a trigger time frame for this entry.

As EURJPY has moved up 110 pips on the day (at the time of writing), it has more than fulfilled its daily average true range of 96 pips, and thus, resistance is likely just overhead. A tight zone has been estimated as a result, and in this case, it is 141.88-142.06. 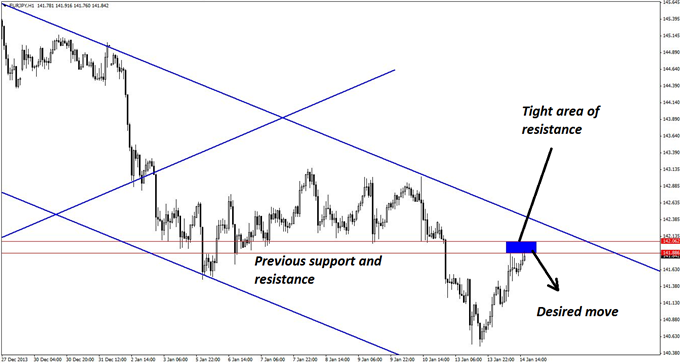 This 18-pip zone should prove quite satisfactory for entering short given that the potential reward could be several hundred pips. The trigger will be seen on the 15-minute chart in order to provide added precision. Although the usual caveat that it may take two or three tries to get into this trade applies, it is not likely that more than two will be necessary at this point.

The 15-minute chart below shows a potential trigger already, as a pin bar is evident. (Other acceptable triggers would come in the form of bearish engulfing patterns and/or bearish reversal divergence.) Should the current candle move below the pin, it will be a valid trigger for an initial attempt at this trade. 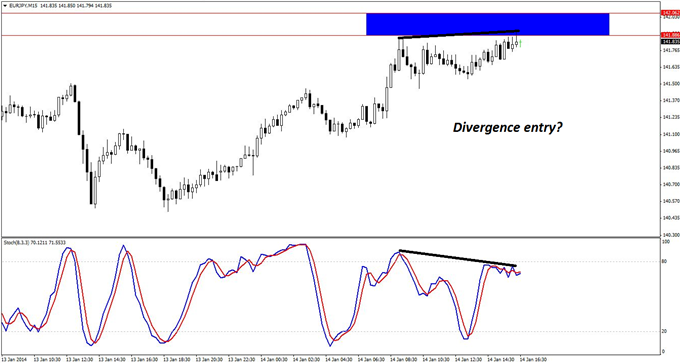