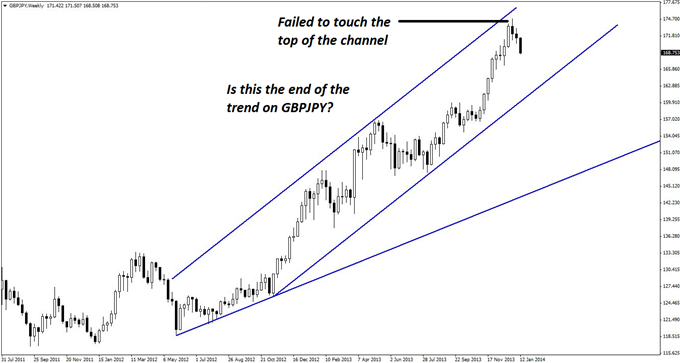 As currencies finally appear to be gathering momentum to start the year, it is somewhat ironic that today’s GBPJPY trade actually goes against that momentum.

Several crosses are setting up, and although the four-hour charts are likely to offer better set-ups, the focus of today’s article will be how to enter such moves using the hourly chart.

On the below weekly chart of GBPJPY, we see that the pair has failed to touch the top of the channel, which usually means that there is some kind of divergence movement occurring, potentially indicating the slowing of the general trend.

However, it is also worth noting that three bearish countertrend candles in a row is unusual, especially given how strong the trend has been, and thus, price may be overdue for a reversion to the mean.

The daily chart pattern below is extremely similar to that seen on the weekly, but with one difference: it is nearing a point of completion. Readers will readily see the upcoming line of support and the potential for that to be traded. Due to the slowing strength of trend on the weekly chart, this trade may not break the previous high, but there is still room for more than 400 pips to the upside, which makes this a very interesting trade scenario. 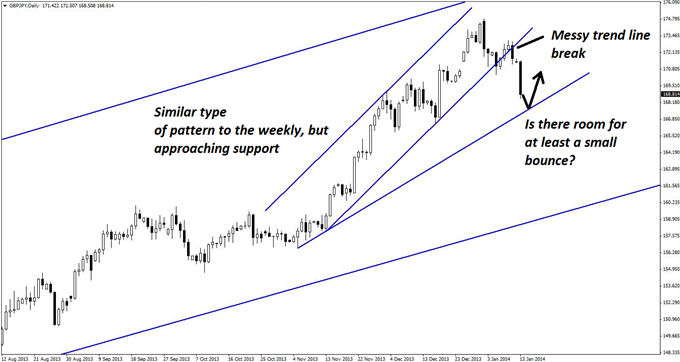 Given that support is more likely to be a range than a line, however, we look to the four-hour chart to gain a better idea of where this trade may develop.

The four-hour time frame offers a declining parallel channel of price action with price currently testing the bottom. This, in conjunction with several other factors such as previous horizontal support/resistance and the rising trend line, provide a zone of support at 167.67-168.89. 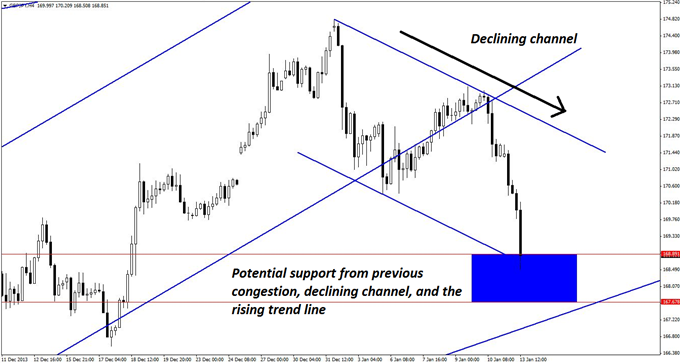 This zone of support is notable for being only slightly more than 100 pips deep while the potential reward on this set-up is several hundred pips. Trades taken within this support zone using hourly triggers would likely have risk of less than 100 pips, and thus, excellent risk/reward profile would be established.

When drilling down further to the hourly chart, however, some traders may be spooked by the extreme momentum exhibited on the chart, and indeed, they should be rightly wary. 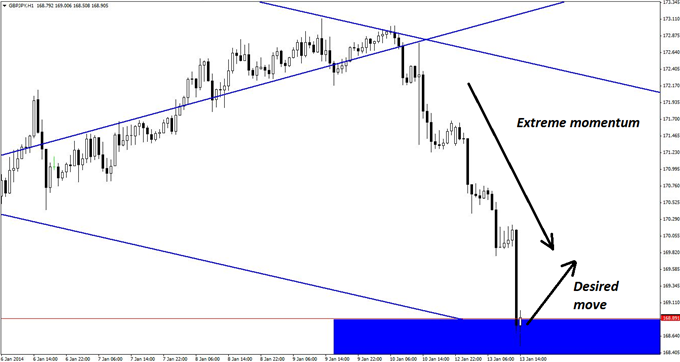 Momentum moves rarely end in a V-type bottom, which we see shaping up in this case. As a result, there are two ways to participate in this trade: