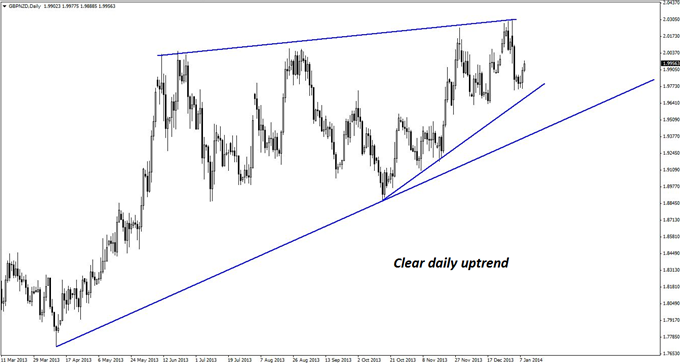 GBPNZD is in a clear uptrend on the daily chart (see below), and yet in spite of that, there may be potential for a short set-up that could run as much as 200 pips.

Normally, traders don’t want to go against the daily trend, but there are exceptions to every rule of thumb, and one of those exceptions is a break of a trend line. As shown below, this has happened on the four-hour chart of GBPNZD.

The break of the momentum trend line set price up to move down towards the next rising line of support, which is a potential move of up to 280 pips. The resistance area is 72 pips deep, which should provide a more-than-adequate reward for risk. 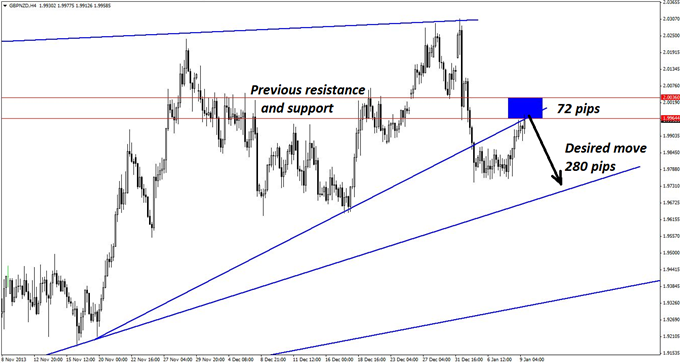 It is worth noting that because two or three tries at the entry are usually advocated, the actual risk may be less than, or occasionally slightly more than, 72 pips, depending on the way the trigger develops on the hourly chart, which is the trigger time frame in this case.

Similarly, the 280-pip target is precisely that, a target. Although targets are very popular among traders, it is best to regard them as guidelines. There is a real danger in disregarding the price and becoming overly concerned about reward for risk. More to the point, trade management should rule the decision-making process, not any pre-determined price targets.

The hourly chart of GBPNZD (see below) looks ready to turn, having printed a five-wave Elliott pattern that, unfortunately, is not entirely obvious. However, there is a line of support in the way, and that could potentially mean that the first try at gaining an entry could flounder. Nonetheless, it is not the business of traders to predict the market, and thus, it’s best to simply continue to take the trades as they trigger. 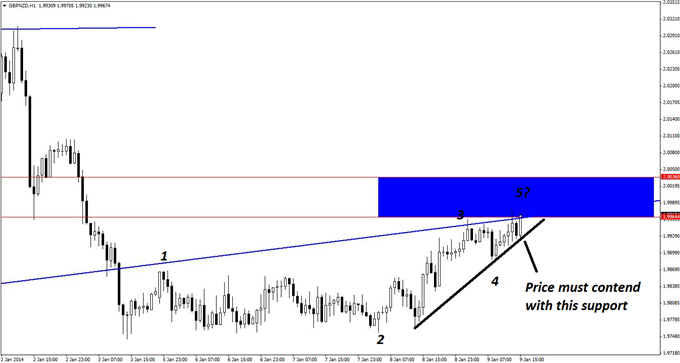 In this case, the triggers would be bearish reversal divergence (which has already formed or is forming now in many indicators), bearish engulfing patterns, and/or pin bars. Stop losses should be placed above these patterns, although more risk-averse traders may select larger stop values.