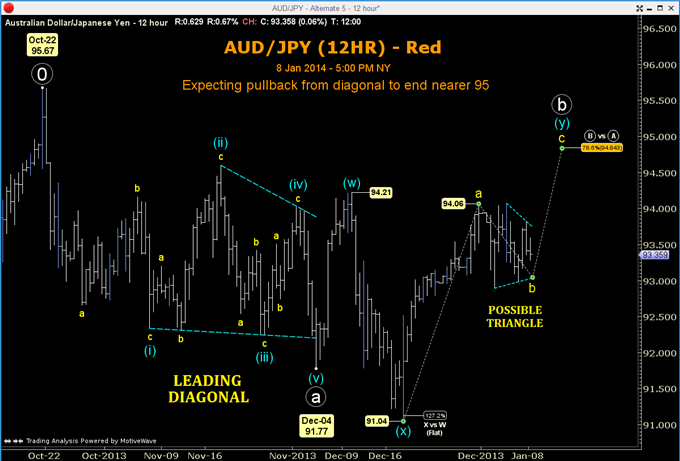 While trade set-ups based on a single chart are fine, when multiple charts (time frames) agree or support a set-up, that trade idea is further validated. Right now, an independent Elliott Wave and Fibonacci analysis of AUDJPY across medium- and short-term time frames agree that there is a buying opportunity present in AUDJPY.

The below 12-hour chart of AUDJPY shows price action beginning at the late-October high at 95.67. Over the five weeks that followed, price action was highly overlapping, suggesting either a corrective or diagonal Elliott wave structure. Here, the move has been classified as a leading diagonal first wave. Though it’s marked as an “a” wave, it could also be called a first wave lower. Either way, we’re looking for a three-wave corrective move after the December 5 low at 91.77.

Second, diagonals tend to produce sharp moves in the opposite direction when they complete. This has happened in AUDJPY, as evidenced by blue wave ‘w,’ whose high was 94.21 (within a week of the low), so one had to consider if that might be the entire deep pullback from the diagonal. While that’s possible, we think it’s only the first wave of the corrective pullback, because a one-week pullback seems too quick compared to the five weeks that comprise the overall diagonal pattern.

As shown, price then moved lower to 91.04 and turned higher. This coincides with a key Fibonacci level, being 127.2% of the move from 91.77-94.21. Therefore, a turn here at blue wave ‘x’ is unlikely to be just coincidence, and it’s likely the end of the second wave of the pullback. This makes the correction an expanded flat.

Such waves have two typical targets for their third waves, but only one is relevant here: the 127.2% extension of the move from 91.77-94.21. That suggests the flat should end near 95.08 (again, say 95), so there’s more supportive evidence for a final move towards 95.

However, the subsequent and consistent rise from 91.04 to an expected level near 95 has stalled since early-December. This provides the opportunity to conduct a shorter-term Elliott Wave analysis.

This 30-minute chart of AUDJPY shows a sideways consolidation since the early-December high at 94.06. The highs and lows during this time are consistent with an Elliott Wave triangle whose individual legs are indicated using green circles. The fifth and final e-leg typically ends near the 61.8% E vs. C level, which in this case is near 93.16. Price is now approaching that level. 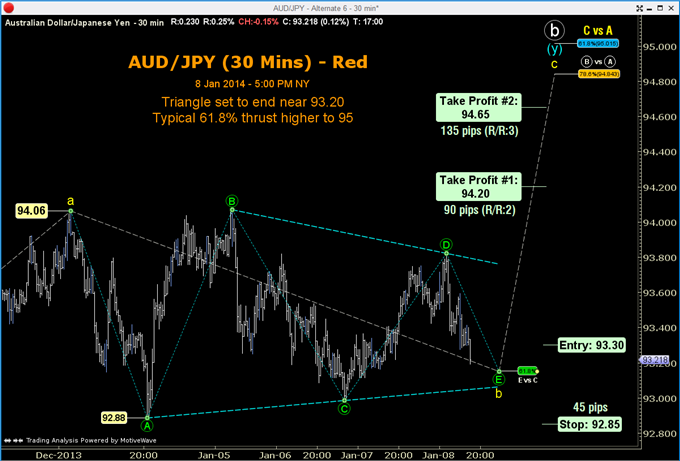 That’s another reason to think that we’re due for a move higher towards 95, and this one was based purely on the triangle on the 30-minute chart.

We now have multiple reasons across two very different time frames to expect a move higher towards 95. Therefore, we’d look to buy AUDJPY around the 93.30 level. Our conservative stop would be below the low of the triangle, at 92.85 (i.e. 45 pips). More aggressive traders might consider a tighter stop closer to the triangle’s c-leg low.

Trade Management: If price reaches 94.20, move stop to break even