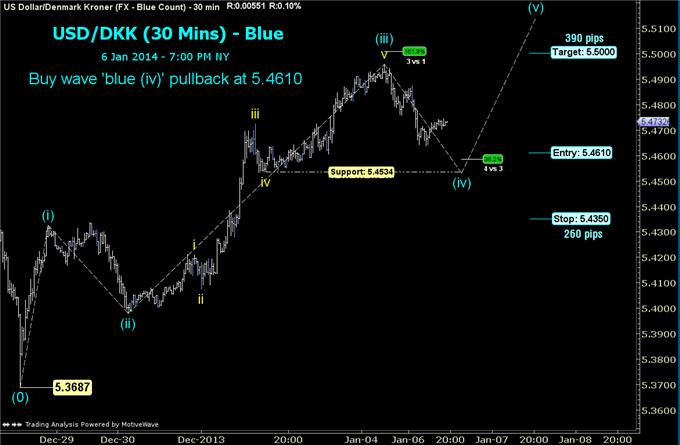 Since Christmas, we have seen US dollar (USD) strength against a number of European currencies, including the euro (EUR), Swiss franc (CHF), Danish krone (DKK), Czech koruna (CZK), Hungarian forint (HUF), and Polish złoty (PLN). We’ve noticed the start of a pullback in the US dollar against some of these FX counterparts, so we’re keen to buy this weakness against these European currencies.

For this particular trade, we’ve selected the Danish krone because it’s a more commonly-traded currency than many of the others.

There are three points to make going in: 1) “krone,” which means “crown,” is the singular form, while “kroner” is the plural; 2) to sell the Danish krone means to buy USDDKK; and 3) Denmark’s contributions to the world extend far beyond Legos and the writings of Hans Christian Andersen.

The 30-minute chart of USDDKK below shows our impulsive Elliott Wave count from the late-December low of 5.3687. The pair rose sharply in blue wave i, which was followed by a flat corrective pullback (blue wave ii). The third blue wave rose almost perfectly to the typical 161.8% extension, at 5.4957.

We’ve also shown that this wave can be sub-divided into five smaller, yellow waves. Since this high, price has been pulling back, so far to the 5.47 level. We expect that this is part of the first of a three-leg corrective fourth wave.

It’s not unusual for fourth waves to find support near the prior degree’s fourth-wave low, which, in this case, is labelled as 5.4534. This level is also slightly below a common fourth wave Fibonacci pullback of 38.2%.

As a result, we’d look to buy USDDKK just above these levels, at 5.4610. This incorporates the typically small spread of about six pips.

Fourth waves usually don’t move into the area of their associated second wave, so we’d expect price to stay above 5.43. Therefore, we’re placing our stop at 5.4350, which produces a 260-pip stop. Those who are more conservative may prefer to place their stop another 50 or so pips lower in case the fourth wave briefly pierces the area of the second wave before making a new high.

Trade Management: If price reaches the 5.5000 target before the stop at 5.4350, abandon the trade