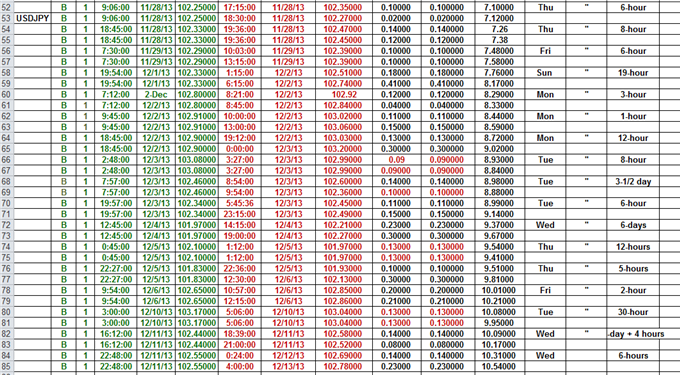 "Picture-Perfect" Trades the Computers May Miss

Most intuitively understand that following a sensible, proven life regimen is the way to balance the conflict that sometimes arises between our logical side and our very human, emotional side. In trading, it is actually better to check emotions at the door, instead relying on the analytic, logical self.

For traders, that “proven regimen” is called a benchmarked trading plan, and it will make the road ahead much easier. Without that black and white proof in hand, a trader likely won’t have the confidence needed to risk valuable capital on a daily basis.

A benchmark is a spreadsheet that shows the complete history of a method's trades in up, down, and sideways markets. It provides an abundance of useful information including that all-important win/loss percentage and risk/reward ratio.

This is the ultimate end game when it comes to market analysis, and it tells when a method is reliable enough to risk real money trading.

Once there is statistical proof that a particular trading method is working successfully (by way of the benchmark spreadsheet), it’s then possible to start demo or live trading that method with the goal of matching personal performance to that of the benchmark for the chosen time period.

Keep in mind it will be virtually impossible to match the benchmark because it is unlikely to be able to stay awake for days straight and manage every trade to the letter of the plan. For this reason, the benchmark is technically hypothetical (see Figure 1 below). It is a record of how to ideally initiate and manage trades, which is often different from the real outcome.

If finding a viable trading method that provides desirable results in all environments were easy, everyone would have one. One of the largest drawbacks for aspiring traders is that they are relying on the computer for indicators. The fractal, or asymmetrical nature, of markets does not lend itself to being measured with technical indicators, which are, at best, secondary, or lagging indicators, of price itself.

The beauty of fractal design is that each new iteration, or pattern, is slightly different than the previous one. While the human eye is good at recognizing this pattern, a computer is not. The computer calculates symmetry, or exactness, in a world that is far from exact.

In a fractal world, each new pattern is a slight variation of the previous pattern—like branches of a tree, or waves hitting a beach—where after just a handful of samples, that difference will have increased enough to be unrecognizable to the original or programed pattern.

On the other hand, however, our eyes can easily follow the string of slight changes to a pattern over time. 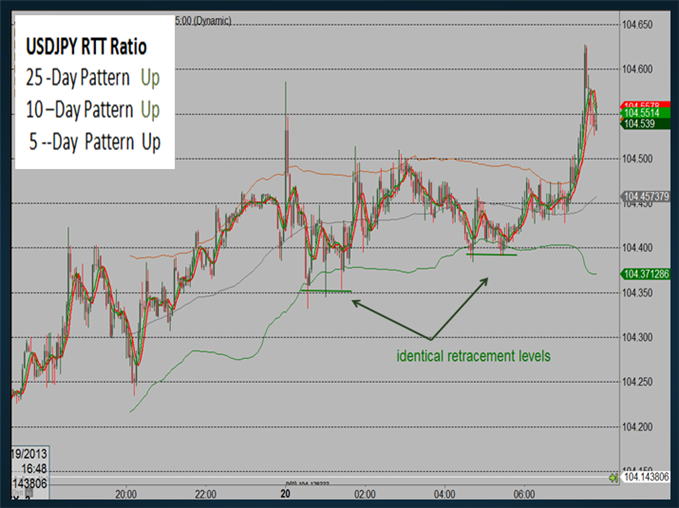 Man vs. The Machine

One example of a pattern that’s easy for the naked eye to see, but that a program likely would not, is seen in Figure 2 above. The two retracement levels, which are identical in terms of percentage, are drawn from the low of the last correction to the high of the ensuing rally, and provide high-probability long-entry levels following price dips. The standard deviation line of the Bollinger Bands also provides a nice visual and lends further confidence. By the way, "nice visual" is not in a computer programmer's lexicon!

To an experienced trader, these two dips in the overall uptrend are picture-perfect trading opportunities that stand out nicely. To the computer, however, they are widely different in both length and timing. In terms of ease and understanding, it is far simpler to draw those retracement levels by hand than try to get a program to draw them instead.

While the computer is a great tool, you have to know its limitations, and a big one is pattern recognition. Figure 3 is the same chart, except we have highlighted the two patterns by outlining them. 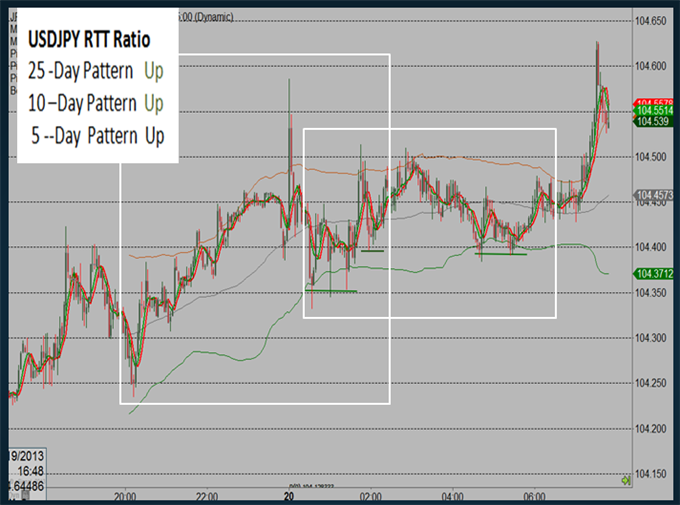 Once you have an experienced eye for pattern recognition, you will notice right away the similar behavior that markets exhibit on all time frames. For example, notice the small box created by the overlap of the two larger boxes.

Notice we have a price "retracement" following a sharp rally, which is again identical in scale to the other two retracement levels we've already highlighted with those short green horizontal lines. It is this similar behavior we are referring to when we say markets are fractal in nature. The sum of the parts equals the whole, and the parts themselves are similar, albeit asymmetrical, miniatures of the whole.

The understanding of this behavior is what we have used to construct the trading method that formed the basis for the benchmark spreadsheet in Figure 1.

Seeing markets from a fractal perspective is definitely an eye-opener, but it also takes a different way of thinking, as does relying on a pre-scripted trading plan instead of your own thoughts. If, however, you are not seeing desirable results in your trading approach right now, you may want to get out from behind the computer and follow intuition instead.