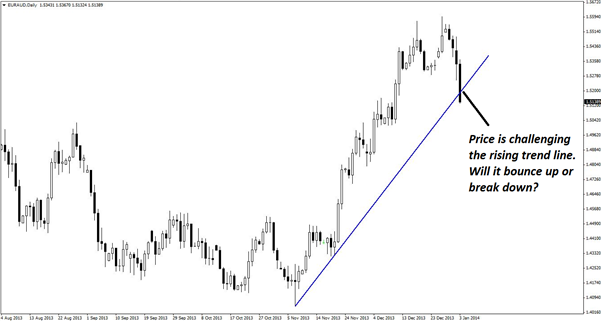 A EUR/AUD Long That’s Just a Signal Away

EURAUD is now challenging a rising trend line on the daily chart (see below). Whether it will it bounce or break remains to be seen, but it is always better to trade in the direction of the trend, in spite of the apparent pullback momentum. Thus, by default, trading a potential bounce off of the rising trend line is a better bet.

Astute Elliott Wave practitioners will note, however, that this is likely to be only a fourth-wave pullback, and technically, there is one more high to be made on the daily chart. Nonetheless, because the initial pullback in wave 2 was shallow, the wave 4 pullback may well be deep and complex, as per the (not unbreakable) "rule of alternation."

Thus, the situation the trader faces is that although price is likely to bounce from the trend line, it may later retrace further before going on to make new highs. Nonetheless, no one has a crystal ball with respect to the markets, and thus, the wisest thing to do is just keep taking defensive trades in order to enter in the direction of the trend.

The four-hour chart below will present an interesting picture for die-hard Elliott Wave counters, as it is showing a rather clear five-wave count. Wave 3, as marked, is longer than wave 1, albeit only slightly. Nonetheless, that is sufficient to justify a five-wave count. 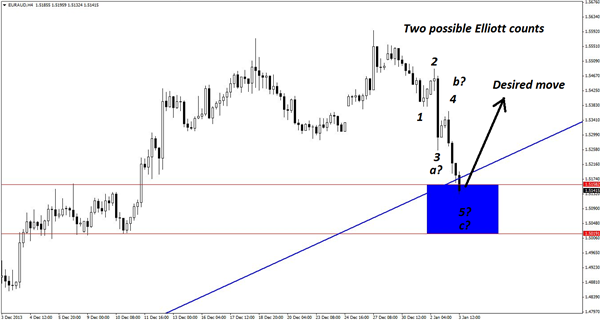 Personally, I prefer this wave count, although I’m aware that some may choose to calculate an a-b-c wave instead. In line with more advanced theory, however, the five-wave version is preferable as the potential beginning of a zig-zag retracement.

For those interested primarily in the bottom line, what this means is that the desired move marked on the chart may well happen, but it may not move up to test the high of the trend.

What is more likely is a bounce up followed by a push further down. Now, that could be tradable as well, depending on how it develops. For now, though, previous support and resistance offer a ready-made support zone at 1.5019-1.5158.

This trade should be taken on the hourly chart (see below), which is also offering a wedge pattern. What is notable about this wedge is that price is currently creeping on the underside of resistance, suggesting that downside momentum is slowing. Thus, on a bullish reversal divergence, bullish engulfing pattern, or pin bar, there will be a favorable entry opportunity. 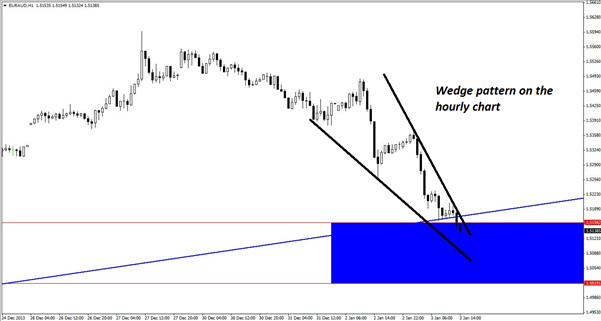 Markets have been overshooting zones as of late, and it may take two or three tries to get in on this trend, but it’s important to still continue taking trades systematically. The good news is that with many FX crosses beginning to develop pullbacks, the "winter of low probability" part of the trading cycle may now be drawing to a close, which will usher in some better trade set-ups.

Just as inexperienced traders cause problems for themselves by taking greater risk during the height of smooth trading, like we had in October and November, they also tend to give up during these difficult periods, choosing instead to leave the markets just as the depths of the cycle are being worked out.

In order to profit consistently in the markets, one has to sit through the highs and lows and continue to work with what’s being presented, knowing that over the long term, an effective, proven strategy will prevail.