A Credible Gartley Pattern in EUR/GBP

One reason why the Gartley pattern is so famous, yet is so rarely traded, is likely because of the conditions that must be fulfilled in order to qualify the pattern. For those interested, Tyler Yell's article provides the full exposition and list of requirements. In practice, though, I’ve found that only the first two conditions need be fulfilled to make it a credible pattern.

Readers may note that the second condition differs slightly from the one referenced in the previous article. The difference, however, is merely one of preference and a result of different traders' experiences in working with the same condition.

It can prove incredibly challenging to constantly scan markets and multiple time frames for this combination of Fibonacci conditions, although I am aware of at least one full-time trader who does just that.

Purists will be glad to hear that the EURGBP trade we’ll evaluate today is one of the rare candidates that potentially fulfills all the traditional conditions on the daily chart. 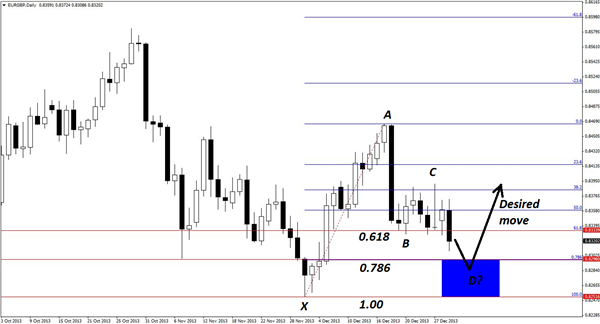 Only the two conditions specified are shown, but if readers care to check the others, they will find that they are present as well. In setting up this trade, it is worth noting that the daily chart is actually in a choppy downtrend, which, when viewed from the weekly chart, is actually the flag portion of a large bullish pennant. 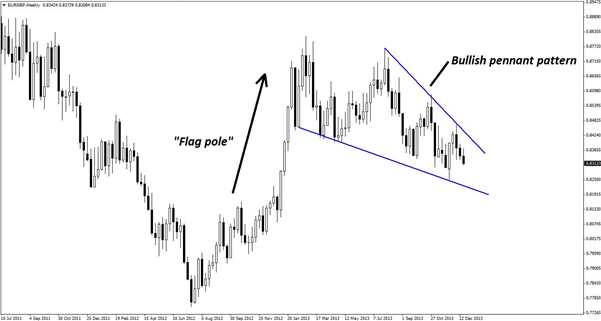 For those who wish to set up a swing trade, the next step is fairly straightforward. The entry could be developed using the four-hour chart (see below) on signs of bullish reversal divergence, pin bars, or bullish engulfing patterns. As usual, two or three attempts to get in on the trend may apply, although this pattern looks more promising than most when studying the four-hour chart. 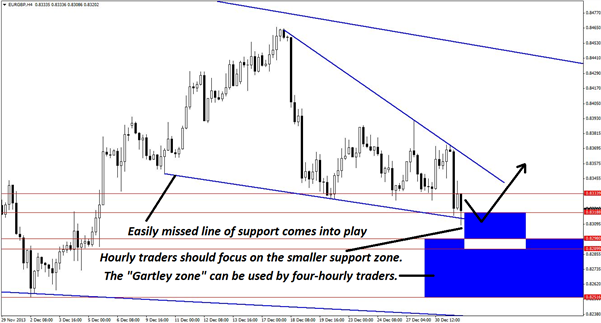 An inconspicuous line of support comes into play on the four-hour chart, and price is already appearing to react off of it. This level of support, combined with a horizontal resistance-turned-support to the left of the chart, provides the top of a smaller support zone. The bottom is derived from the congestion area to the left on the chart.

On the hourly chart (not shown), traders can use 0.8289-0.8318 as the key zone of support, applying the same triggers and requirements (including the two-or-three-tries clause) described previously.

Four-hour-chart traders are advised to respect the Gartley pattern, however, and should instead wait for the larger pattern to develop at the larger support zone, which is 0.8251-0.8290.

Clearly, the white patch where the analysis overlaps becomes an area of intense interest. This zone is 0.8289-0.8298, a very narrow area that will readily cater to precision traders.

Alas, no one knows which scenario will develop until after the fact, and, of course, like any other, Gartley patterns can fail as well.

For further proof of why the Gartley pattern can be so significant, it is worth studying what was the "trade of the year" in 2009, a long set-up in GBPUSD, which is shown below for educational purposes.

Guest Commentary: A Gartley-Inspired “Trade of the Year” 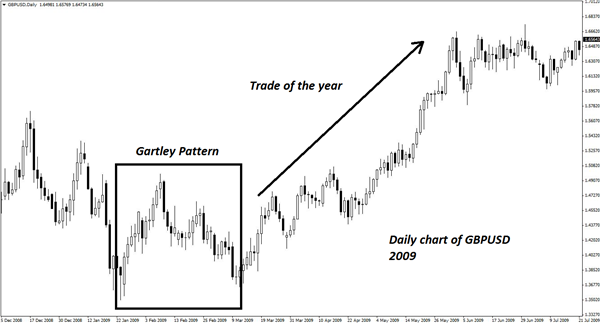 It’s important to remember that patterns will often not yield such favorable results, but it’s also encouraging to know that at least there’s that possibility!