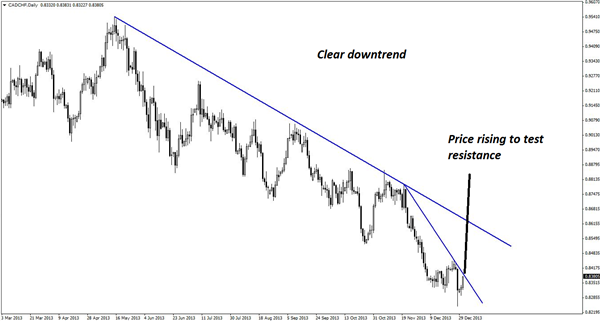 Many traders will be taking New Year’s Eve off, but for those insistent on watching the charts until the very last moment, CADCHF may present a good final trade opportunity for 2013, or a viable first trade of the New Year.

This trade was chosen because it is already in the relevant resistance zone now, and hopefully will trigger relatively quickly.

The daily chart below is showing a downtrend with a pullback following Christmas. As price rises toward the declining line of resistance, there will be a potential opportunity to short this pair.

Of course, a break of the overhead trend line would result in a whole new set of possibilities, but this potential short play is the most current one. Without the proverbial crystal ball, it is best to simply keep taking the next trade, rather than trying to anticipate what will happen.

The four-hour chart below shows a classic set-up, allowing a tight resistance zone to be estimated using previous swing highs on the left side of the chart. It remains to be seen if price will overshoot, but regardless, it appears that a reasonable area in which to initiate shorts would be 0.8380-0.8408. 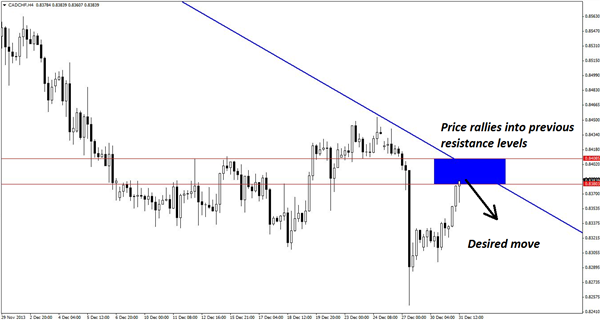 The hourly chart below shows a breakout from an even shorter-term momentum trend line. Breakout traders who took that trade would have been most pleased with the results, and many would target the highlighted resistance zone as a take-profit level. Thus, there should be at least a reaction at this level as price touches it, even if it does not develop into a full-blown reversal. 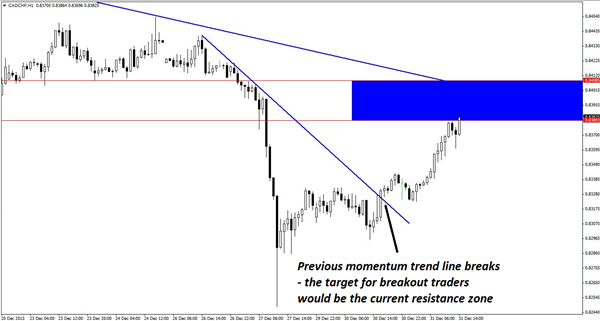 Given the relatively tight zone, the hourly chart is a good trigger time frame. As it has already touched the desired area, and now, all that remains is an actual trade trigger, which will come in the form of either pin bars, bearish engulfing bars, or bearish reversal divergence.

As usual, two or three tries at the entry should yield a result, although two will likely suffice in this case due to the resistance area being relatively narrow.

It is not surprising that the market has been slippery over the past two weeks for this style of trading, often mildly overshooting projected support and resistance. Nonetheless, that is par for the course, and traders would be advised to simply stay patient and take the next entry according to their plan.

Already, various pairs are beginning to show more interesting price action as they line up in pullbacks from trends, which should bode well for us in the New Year.

Best wishes for a happy and prosperous 2014!